Sony recently unveiled its forthcoming Xperia Z Ultra smartphone that, due to its massive 6.4" full HD display, slots into the phablet category (smaller than a 7" tablet, larger than a 5" smartphone). TechSmart was given the opportunity to get some hands-on time with the large screen smartphone earlier today at the Sony Store at Vodaworld in Midrand. 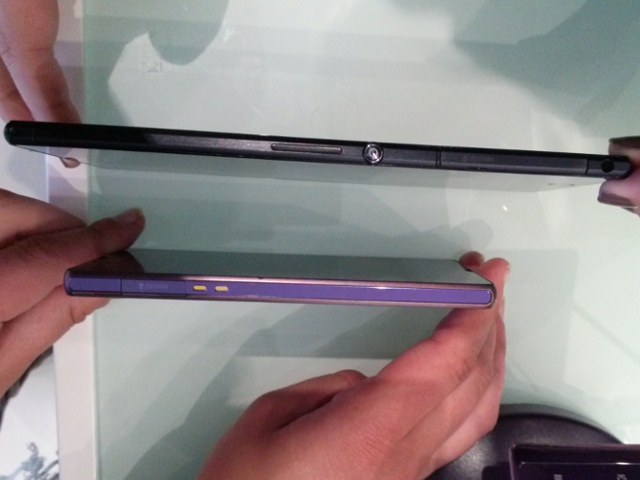 Thinner than most smartphone’s, that is Sony’s Xperia Z Ultra (top) compared to the Xperia Z (bottom).

During our brief hands-on time with the tablet we were also taken with the premium feel and sturdy build quality of the device. Like the Xperia Z smartphone and Xperia Tablet Z, the Xperia Z Ultra is dust and waterproof (IP55 and IP58), with users being able to keep the smartphone under 1.5 m of freshwater for up to 30 minutes.Although Sony did not demonstrate this feature at the event, like it did with the Xperia Tablet Z, we did like the fact that the Xperia Z Ultra has less flaps via which users access the various ports of the device.

The 3.5 mm jack is exposed, requiring no annoying flap to be opened when you want to plug in a pair of headphones, and thanks to the smartphone coming with a charging dock in the retail package, there is also no flap to access a charging port either. Instead, users slot the smartphone onto the dock with the device held firmly in place via its magnetic connection.

When it comes to size we had no trouble handling the large screen device, as its format allows for a much more enjoyable multimedia consumption- and web browsing experience. Our main concern comes with regards to portability, as users can carry it around in notebook bags, jacket coat pockets or handbags, but the Xperia Z Ultra is way too big to fit into most jeans or pant pockets.The only other concern is how you look answering calls on a smartphone as big as this - namely, ridiculous (illustrated in image posted below). However, this drawback is much easier to address via a Bluetooth hands-free headset.

Another impressive design element of the Xperia Z Ultra is its 6.4" touchscreen which is incredibly responsive, sports superb colour reproduction and has excellent viewing angles. This is not surprising, since the Triluminos display also sports Sony’s X-Reality for mobile, which happens to be the same technology that the company utilises on its massive ultra HD (3840 x 2160, aka 4K) TV sets.Amongst other enhancements, this technology analyses images in order to optimise picture quality and deliver the sharpest looking videos. Websites and photos displayed excellent levels of detail, whilst videos look great on this screen as well.

Android Jelly Bean (4.2.2) runs fluid and quite snappy on the Xperia Z Ultra thanks to 2 GB RAM and Qualcomm’s latest and greatest CPU in the Snapdragon 800 under the hood. This quad-core CPU runs at 2.2 GHz per core and poses the biggest threat to Samsung’s Exynos 5 Octa that does duty in the Galaxy S4 (review) come benchmarking time.

All things considered, Sony’s Xperia Z Ultra manages to come across as a sturdily constructed, premium looking device that boasts some incredible processing performance as well as unique attributes in its waterproof and dustproof design.

Its mammoth frame will not strike a fancy with skinny jeans fans, and only time will tell whether this smartphone will be crowned king of the phablet niche or catch on with regular smartphone users to the same extent as our top smartphone of 2012, namely the Samsung Galaxy Note 2 (review).

The Xperia Z Ultra is expected to launch in South Africa during September 2013. No pricing info is available as yet.

In related news, Sony also recently revealed its new dual-SIM Xperia C, which will be locally available around September at an estimated retail price of around R3 000.