Tablets to slow to single-digit growth by 2017

Market research company IDC (International Data Corporation) has lowered its global tablet shipment forecast for the year from 227.4 million to 221.3 million. Despite being less than the  firm’s previous prediction, this figure still marks a generous 53.5% year-on-year increase.

The reason behind the lowered forecast is the rise of phablets such as the Galaxy Note 3 (quick review), Sony Xperia Z Ultra and Nokia Lumia 1520. These are mobile devices with a display real estate larger than 5" smartphones but smaller than 7" tablets.

IDC noted that over the course of the last 24 months the market has trended toward small tablets in a major way, but added that the proliferation of large form factor smartphones might result in consumers opting more for larger tablets. This, as the size gap between a 6" smartphone as well as a 7" tablet is so negligible that it does not warrant buying both.

Furthermore, IDC asserted that Apple's launch of the iPad Air, which is a much thinner and lighter version of its quintessential 9.7" tablet product, could also contribute towards the user shift back towards bigger tablets. The caveat with the Cupertino factor being, of course, that consumers are willing to fork out the higher costs associated with the bigger screens.

According to the data analytics company’s worldwide quarterly tablet tracker service, tablet shipment growth is forecasted to slow down to 22.2% year-on-year in 2014, to a total of 270.5 million units.

By 2017, IDC stated that annual market growth will slow to single-digit percentages, with shipments peaking at 386.3 million units. This figure is also down from the IDC’s previous forecast of 407 million units.

“In some markets consumers are already making the choice to buy a large smartphone rather than buying a small tablet, and as a result we've lowered our long-term forecast,” explained Tom Mainelli, research director, Tablets.

“Meanwhile, in mature markets like the US where tablets have been shipping in large volumes since 2010 and are already well established, we're less concerned about big phones cannibalising shipments and more worried about market saturation,” Mainelli concluded. 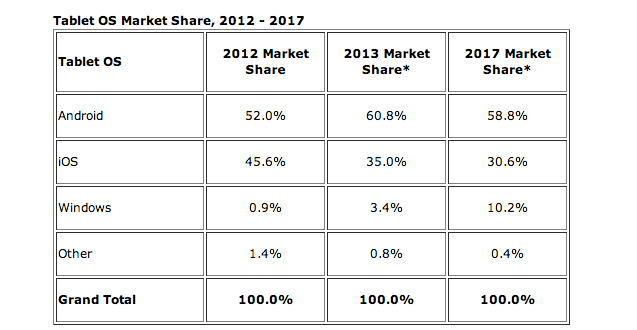 Redmond’s tablet growth on a go-slow

According to IDC, this transition towards larger tablets may result in a boost for Windows-based tablets, since these generally benefit from a larger screen area. Despite this, Windows-powered tablets are not expected to snatch market share away from the iPad or Android-operating tablets until the latter part of the company’s forecast.

“This holiday season, we expect a huge push for these devices as both companies flex their marketing muscles; however we still don't expect them to gain much traction. We're already halfway through the holiday quarter, and though there have been some relatively high-profile launches from the likes of Dell, HP, and Lenovo, we've yet to see widespread availability of these devices, making it difficult for Windows to gain share during this crucial period,” added Ubrani.