This impressive growth has come in spite of a number of mature markets nearing their smartphone saturation point. Driving the market increase though is the demand for low-cost computing devices within emerging markets, according to IDC. By 2017, total smartphone shipments are anticipated to reach 1.7 billion units, amounting to a compound annual growth rate of 18.4% between 2013 and 2017.

If the price is right

Although there are many factors and trends boosting smartphone adoption worldwide, IDC stated that none of these have more impact than the steady decline in average selling prices (ASPs).

Google’s Android has enabled a number of new manufacturers to enter the smartphone market, with many of these OEMs (original equipment manufacturers) focusing on low-cost devices as a way to build brand awareness.

“The game has changed quite drastically due to the decline in smartphone ASPs,” said Ryan Reith, program director with IDC’s Worldwide Quarterly Mobile Phone Tracker. “Just a few years back the industry was talking about the next billion people to connect, and it was assumed the majority of these people would do so by way of the feature phone. Given the trajectory of ASPs, smartphones are now a very realistic option to connect those billion users.” 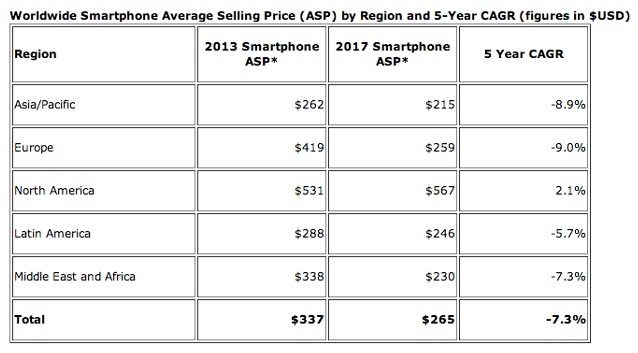 According to IDC, it is the emerging markets that includes Middle East and Africa (MEA), Asia/Pacific, and Latin America that will post market-beating growth rates between 2013 and 2017. In contrast, developed markets will experience a decline over the same period, but IDC added that volume increases will still be attained in these key markets regardless. All markets considered though, the global smartphone market looks set to deliver certain growth over the next few years.

“The key driver behind smartphone volumes in the years ahead is the expected decrease in prices,” said Ramon Llamas, research manager with IDC’s Mobile Phone team.

“Particularly within emerging markets, where price sensitivity and elasticity are so important, prices will come down for smartphones to move beyond the urban elite and into the hands of mass market users. Every vendor is closely eyeing how far down they can price their devices while still realizing a profit and offering a robust smartphone experience,” Llamas concluded. In other market research related news, Canalys stated that Android-powered tablets will account for 50% of the worldwide device (desktop PC, notebook PC, and tablets) market in 2014.