The latest research from data analytics company Canalys forecasts that next year tablets will nearly outship every PC form factor combined, to amount to almost 50% of the total computing device market (desktops, notebooks, and tablets).

According to the market research company, the global client PC market increased by 18% during Q3 2013, despite desktop as well as notebook shipments continuing to decline. Tablet shipments accounted for 40% of computing device shipments worldwide in Q3 2013, less than half a million units behind global notebook shipments.

Canalys predicts that this domination of tablets is set to continue, forecasting that 285 million devices will be shipped next year, before growing to 396 million units over the course of 2017. Leading the tablet charge (at least over the medium term) is Apple and Samsung, but Canalys added that there might be challenges to the dominance of these two vendors as competition in the tablet market continues to heat up.

Apple shinier and tastier thanks to tablet sales

The company’s research revealed that Cupertino has managed to maintain its top tablet OEM (original equipment manufacturer) position throughout 2013. After launching the iPad Air and new iPad mini, Canalys added that Apple’s leadership position has now also been provided with a boost for Q4.

When it comes to its Mac computer shipments however, Cupertino’s focus on protecting its gross margins will result in the company’s PC market share decreasing. “Apple’s decline in PC market share is unavoidable when considering its business model. Samsung narrowly took the lead in EMEA this quarter and Apple will lose its position to competitors in more markets in the future,” said Canalys senior analyst Tim Coulling.

The rise and rise of Android

According to Canalys, Android will be responsible for driving growth in the tablet market, as Google’s mobile platform is forecasted to take the lion’s share (65%) within 2014 at 185 million unit shipments.

Samsung leads the Android charge and during Q3 2013 the Korean tech giant’s stake of Android tablet shipments amounted to 27%. This share will hit the down button of the global market elevator though, as Canalys sees the hundreds of small-to-micro brand vendors within high-growth markets along with international players the likes of Acer, Asus, Lenovo, and HP eating into this stake. 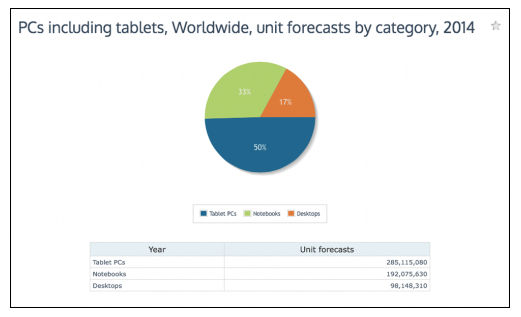 Canalys forecasts that Microsoft will take 5% of the tablet market in 2014, up from just 2% in 2012. Canalys research analyst Pin Chen Tang stated that 2014 will see another major shift for Microsoft, thanks to its acquisition of Nokia’s mobile device division. As a OEM, Tang said that Redmond now needs to prove to channel partners as well as consumers that it is in this market for the long haul.

“To improve its position it must drive app development and better utilise other relevant parts of its business to round out its mobile device ecosystem,” added Tang. “A critical first step is to address the coexistence of Windows Phone and Windows RT. Having three different operating systems to address the smart device landscape is confusing to both developers and consumers alike.”

Canalys also interestingly pointed out the casualties of the cut-throat tablet market, with BlackBerry exiting this market segment, as well as Barnes and Noble making changes to adjust its business model away from being an independent hardware vendor.

The market research firm is anticipating 2014 to be riddled with a flurry of mergers and acquisitions, as well as failures as PC hardware vendors of all sizes struggle to maintain their desktop and notebook business, while simultaneously aiming to capitalise on a burgeoning tablet market.

In other market research related news, ABI Research recently revealed that Android will be making deeper inroads in the enterprise segment of the smartphone market over the course of the next few years.