The 'confirmed' features for the upcoming iPhone 8 after recent leak

When it comes to the latest smartphones, leaked information and images has become the norm, with Apple's iPhone one of the main victim for such developments. With the iPhone 8 the next mobile device expected from the company, a recent Forbes report details a swathe of details for the forthcoming smartphone.

The information comes courtesy of three Foxconn employees, the company that handles the manufacture of the iPhone and several other Apple products. The list of features is extensive, totalling 15 in all, but as always, we advise that you take this with a grain of salt.

The iPhone 8 info is as follows:

1. The new iPhone is called the iPhone X, but unclear if this is just a code name.
2. It will look like the phone in the centre of the photo below.
3. There is a new dual rear camera with vertical alignment.
4. The front bezel will be thinner on the sides.
5. Test units have Touch ID under the glass.
6. No version is planned with a rear fingerprint scanner.
7. AuthenTech’s Touch ID capacitive touch module has been replaced.
8. There will be Facial Detection and a Retina Scanner.
9. There will be two front facing camera modules.
10. RAM remains at 3 GB like the iPhone 7 Plus.
11. The aluminium unibody is replaced by composite glass.
12. There’s wireless charging via a rear panel.
13. It will be water resistant, but improved IP rating is unknown.
14. There is no USB-C, Apple is sticking with Lightning.
15. Production is indeed delayed, but no precise launch window mentioned. 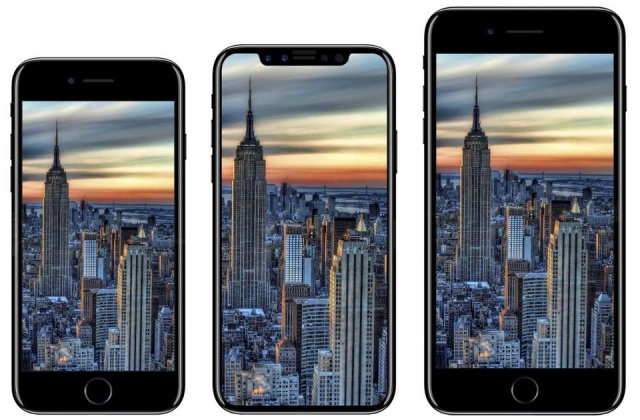 The are no glaring new revelations above, with an increased display area, smaller bezels, as well as fingerprint reader embedded in the display, all being mentioned in previous detail leaks for the iPhone 8/X.

With manufacturers like LG, Samsung and more recently Essential going the 'bigger display in the same body' route, that's at least one aspect of Apple's forthcoming phone that we think is a sure thing. More leaks, are also a certainty.