Twitter is a social media platform for exchanging ideas and expressing one's original opinions, but given the vast number of users on it, monitoring that originality can often be hard to do. As such, several Twitter users have been complaining about others tweeting their original jokes without giving credit. While Twitter has some other more pressing issues to address, like the hate speech directed towards women in tech, the company has made the small step of handling this joke issue.

If you frequent Twitter from time to time, you may have seen a message stating that "This tweet from […] has been withheld in response to a report from the copyright holder. Learn more at https://support.twitter.com/articles/15795-copyright-and-dmca-policy." This message was now also found used in relation to the use of retweeted jokes by @PlagiarismBad, which as you can imagine, has some strong views on the use of unlicensed material.

According to The Verge, the information was found relating to Twitter user, Olga Lexell (@runolgarun). Lexell, who works as a freelance writer in Los Angeles, California, filed a request with Twitter to have retweets of her original message (shown below) removed, if they did not credit her. 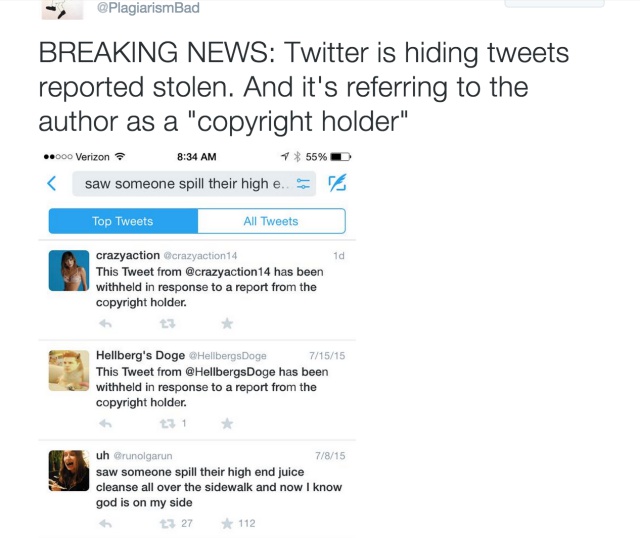 Furthermore, she gave the following statement in response to why she made the request. "I simply explained to Twitter that as a freelance writer I make my living writing jokes (and I use some of my tweets to test out jokes in my other writing). I then explained that as such, the jokes are my intellectual property, and that the users in question did not have my permission to repost them without giving me credit," says Lexell.

The greater picture in all this, is what Twitter will do when similar complaints or concerns are raised, such as the aforementioned hate speech. Another issue is that of defamation of character, as both people and corporations could potentially request to have negative comments made about them removed. In recent months, The Verge highlighted the likes of GoPro and The Sunday Times (UK), both of which, have tried to use the measure to have criticisms removed from or blocked in Twitter.