This week isn’t half way through and already it has brought an interesting pairing of Vodacom and Samsung, with the companies joining forces yesterday at the refreshed Vodacom World in Midrand. While Vodacom launched OneNumber, Samsung debuted its first eSIM wearable device – a Samsung Galaxy watch with an imbedded SIM card.

Vodacom’s OneNumber, in a nutshell, enables its customers to connect a variety of devices that have cellular capability to connect to Vodacom’s network via their own number, a move somewhat reminiscent of twin SIMs, but it is also more than that. With OneNumber, Vodacom users will be able to connect up to eight devices, spanning smartphones, tablets, smartwatches, notebooks and even one’s smart car.

The duo of debuts was completed by Samsung, with their latest Samsung Galaxy LTE watches – both the 42mm and 46mm variants, having the distinction of being the first wearables that will connect via eSIM.

The allure of OneNumber and the eSIM wearable is that users will still be able to remain in touch should they leave or forget their primary device at home, for example, or if they go for a walk or run and don’t want to tote their smartphone with them (not a great idea in some cities).

Another scenario given for the convenience of eSIM is that business or office bound users can leave their smartphone to charge should that be needed while going from one meeting to the next, and still be able to respond to incoming calls, messages or alerts.

The video shown at the event hinted that OneNumber is also aimed at helping people remain connected while also untether themselves from their device; enjoying nature but still having the advantages of technology at hand (or perhaps more correctly, on wrist). 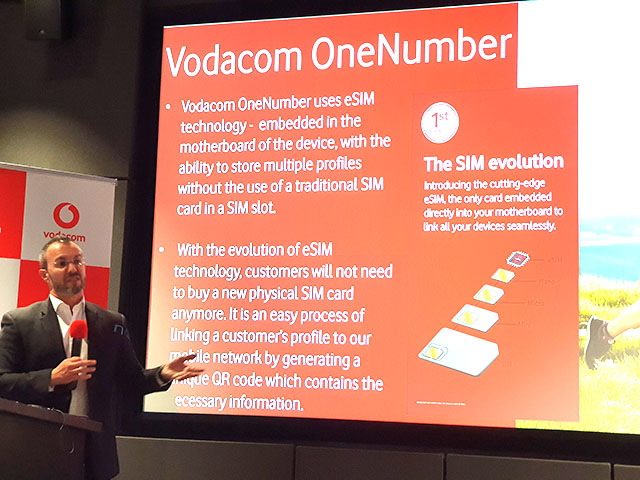 For both companies, there is a bit more to the announcement than just announcing a new service or new product. Rather, the move appears to be aimed at remaining on the cutting edge of being relevant in a digital age.

Jorge Mendes, the chief officer for Vodacom business unit, explained that the move is part and parcel of the company’s desire to remain on the forefront of innovation and offer the value that innovation generates to their customers.

“We want to ensure customers love the technology they have rather than feeling like they are tied to a contract and have to put up with the technology in their possession,” he stressed.

And indeed, based on our very initial experiences with the LTE smartwatch and the convenience of being untethered from our smartphones while still secure that we are connected, it’s quite easy to enjoy the convenience it offers. For example, if you too find yourself hurriedly reaching for your smartphone while it’s ringing, to answer it in time before it goes to voicemail, the smartwatch solves that problem.

Because the smartwatch rings at the same time, it’s easier to catch the call on one’s wrist and then transfer it to a wayward phone when you find it while you are on the conversation.

Justin Hume, the integrated mobility director at Samsung, added that the company aims to bring meaningful technology to consumers, allowing them to remove the existing barriers that challenge their interconnected lifestyle. “This is another step forward in our commitment to support the development of the IoT and multi-device experience market,” he enthused.

He noted that while the eSIM pairing is exclusive to Vodacom, it will work across a range of devices and operating systems, it’s not just limited to Samsung products or Android. That being said, the companies sweetened the pot by noting that users who upgrade to one of the recently launched Galaxy S10 devices will be able to bundle the Samsung Galaxy LTE smartwatch and add it to their contract for a nominal monthly amount.