WhatsApp recently surpassed a significant milestone, with the instant messaging platform reaching more than one billion daily active users on its app. The company also reported even higher numbers when it came to its monthly active users, with 1.3 billion using the service. Furthermore, WhatsApp Status, which is a clone of Snapchat Stories, has also achieved 250 million daily active users.

As such, it appears as if the investment that Facebook made a couple of years ago in acquiring WhatsApp has turned out to be smart business, with the Status feature within the app surpassing the likes of Snapchat and their daily active user numbers.

WhatsApp did not stop there, however, when it comes to stats and figures, with an estimated 55 billion messages sent every day, which includes 4.5 billion images and 1 billion videos. As for what next is planned for the platform, the company did not go into detail, but did mention that improved features are constantly being worked on.

"As we celebrate this milestone, we’re committed more than ever to bringing you more useful features to enjoy, while delivering the reliability, simplicity, and security you expect with WhatsApp. Thank you for your continued support," said WhatsApp CEO, Jan Koum. 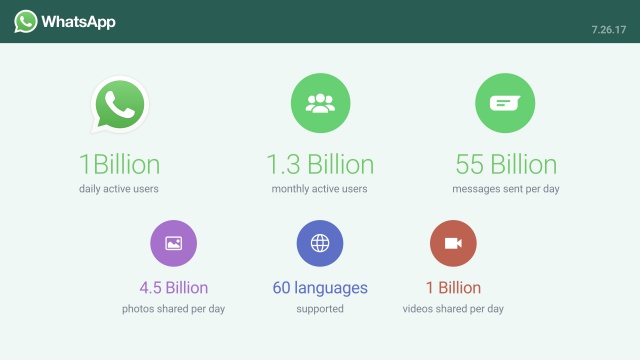