Winter is Coming, and so is GeekFest 2015 this weekend

It's that time of year again folks. When Joburg's geek-obsessed descend upon Dark Carnival's GeekFest. For the 2015 edition, Huddle Park Golf & Recreation plays host to all manner of pop culture and gaming fans. With the dead of winter fast approaching, GeekFest 2015 serves as a great way to stock up your geek-larder to see you through the coming months.

Come One, Come All

It doesn't really matter what you're into, GeekFest usually has its fans well covered. This year, they've added a few new aspects to the day long event. First, there will be a Mortal Kombat X (review) tournament taking place, and nothing warms the body more, quite like the feeling of crushing your opponent's soul in one-on-one console combat. First prize for the MK winner on the day, will be a limited edition Xbox One version of MK X, which comes with exclusive Goro DLC. The winner will also receive a R500 voucher from Dark Carnival, as well as a pair of Cooler Master Sirius C gaming headsets, plus a few more to whet the appetite.

One of the other new attractions will be a Trading Post, where GeekFest attendees can trade all their old, unused or unwanted comic books, Magic the Gathering playing cards, figurines and even cosplay outfits. You won’t have to spend the whole day bartering either, as the Trading Post will have boxes to rent for the day (R20 each), where one can place all their wares (clearly priced and labelled with contact details), and GeekFest will take care of the rest. 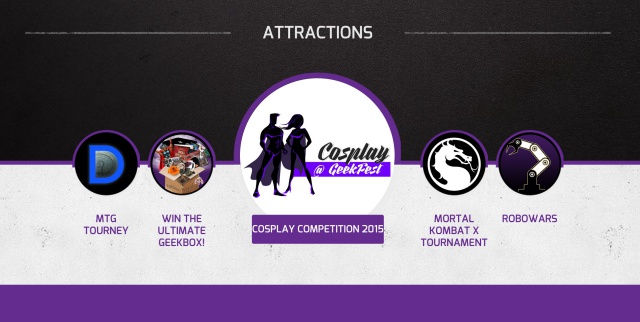 Along with a few new attractions, some of the old fan favourites are back, such as being able to duel a knight, a Magic the Gathering tournament and the wildly popular cosplay competition. Capping things off, is the Zombie Run at night, which should help you burn off the calories you've put on throughout the day.

Tickets for this year's GeekFest are available via Webtickets at R80 a pop. If you'd rather buy your tickets at the door, you'll have to fork out R100 instead. Having attended last year's GeekFest, we can safely say that it's not simply for geeks, but that the entire family can enjoy it.