PC security has become increasingly critical as we move into the digital age, not just because we are more dependant on our information than ever, but also because the threats have ramped up over the years. Viruses, spyware and malware, which have been present for ages are certainly still around. But now individuals and businesses have to contend with insidious new threats, like ransomware, which can cripple a business, not to mention bring any individual’s digital and financial wellbeing to a screeching halt.

First off, in order to install the programme, which weighs in at a little over the 300 MB mark, you need to create a user account. Granted, you can just sign in with your Facebook or your Gmail account. I am inclined to think that creating a dedicated username and password for Bitdefender is a better idea, so as to skirt any concerns around your Facebook account being hacked.

Once downloaded and installed, Bitdefender 2018 provides a single screen from which all features can be managed and accessed. This certainly makes working with the programme easier and simpler. On this dashboard there is a clear as day indication whether your device is protected  and whether the software is up to date or not, with a single button to resolve either scenario. 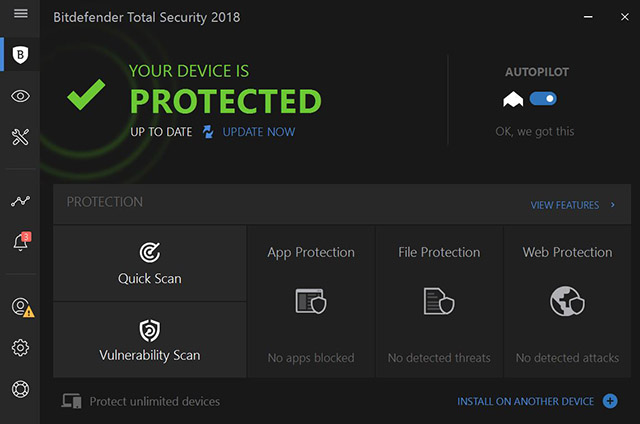 Set and forget or Delve deeper

No doubt the first feature that most users will be drawn to is Autopilot, which makes all security related decisions for the user, while ensuring that you won’t have to contend with pop-ups or configuring any settings yourself.

If you want more control, or just want to finetune what exactly Bitdefender does and does not do, there is that option as well – and the programme certainly can do a lot. Its functionality is divided into three areas – web protection, app protection and finally file protection, so basically guarding the three fronts on which one’s security would potentially be compromised. At a glance the dashboard shows whether any apps installed on one’s system are suspect and have been blocked, whether any attacks have been detected from the web and whether there are any threats found in particular files.

What’s really appreciated in Bitdefender is how logically its feature set is organised. There is really no point in having a bunch of features if the user has to search through menus and submenus to find them. To mitigate this, Bitdefender uses several single screen interfaces, which allows you to configure or view multiple features from one pane. 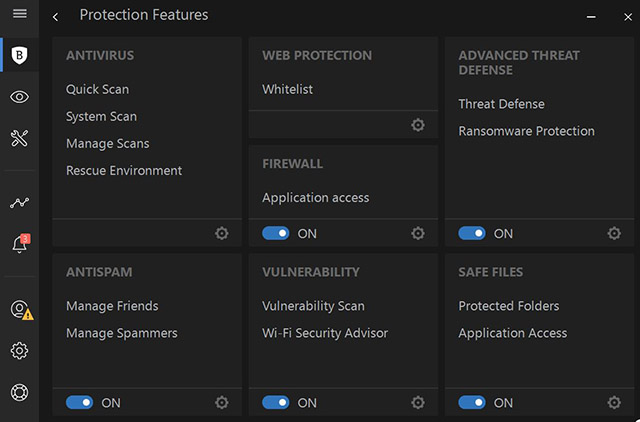 For example, looking at web protection, from one screen you can access antivirus and antispam functionality, scan web traffic for malware, protect against fraud and phishing and scan Secure Sockets Layer (SSL), which is responsible for establishing an encrypted link between a web server and a browser.

Moving on, under another tab you can then address the security of your data. The inclusion of this functionality no doubt is intended to protect you from cybercriminals with the foul intent of either stealing your money or compromising your sensitive data, neither of which are desirable. Thus, you get what Bitdefender calls Safepay and Wallet. Safepay enables you to designate particular e-tailers for example and use an encrypted portal when making payments online. Wallet stores and manages all passwords and personal info and then automatically populate your credentials or payment data, when logging into a site or making an online payment respectively, directly into your browser.

Hands off and heads up

Additionally, there is a Filevault feature, where you can, as the name suggests, lock select files into a dedicated folder, which can only be opened with a password.

Another feature that Bitdefender offers is real time notification; with any suspicious behavior being reported as it occurs. Thankfully, was reviewing the product I didn’t get any heads up warnings on my end, but it is still reassuring to know it is there. There are also two other features that Bitdefender brings to the fore and that are well worth mentioning. The first of these is a vulnerability scan, which assesses and advises on the security of your Wi-Fi connection.

This for me is the really valuable feature on offer, especially for when switching between different Wi-Fi connections when on the move. And yes, the programme did alert me to a Wi-Fi connection I was using that wasn’t secured, which I would not have otherwise known.

The final feature that made Bitdefender an impressive, even essential, addition to a PC is advanced threat defence, which includes protection against ransomware. With it active, any application that has been detected as being ransomware will be blocked and named in its own dedicated list. The program can further keep a log of the past 90 days as to whether your computer has been free from this insidious and debilitating threat. 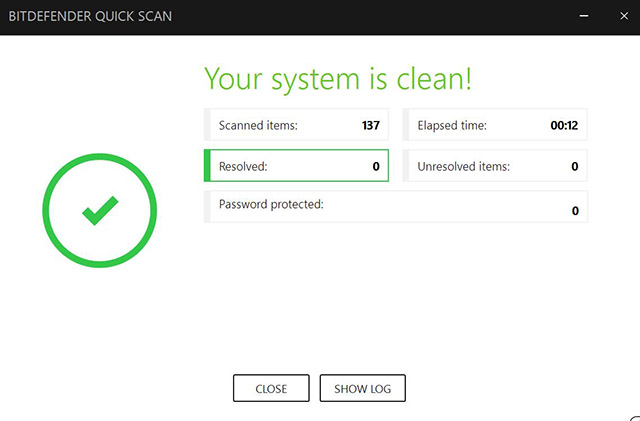 In the past, some security programmes have given themselves a bad rap for slowing computers down to a crawl as they have tended to consume system resources, often adversely affecting startup times. Making your computer secure is all well and good, but not if it is at the expense of being unusable. I was pleasantly surprised, given the breadth of Bitdefender’s functionality, to see that it had no adverse affect on the performance of my PC, consuming a measly 70 MB of data when running the main interface on startup and an extra 20 MB cost when running a scan.

It's impossible of course to tell how long eachscan will take, since that will vary from one computer to the next and depend on the number of files being scanned and each individual system. What I could determine though was that while running an antivirus scan, my PC didn't lock up or become sluggish, which is certainly a point in Total Security's favour.

To be honest, for many security software is still often a grudge purchase, that is, of course, until they are hacked. It is not as sexy as for example Photoshop or Corel Painter, but good security software is far more essential. And Bitdefender Total Security 2018 is not just good, it’s excellent. A breadth of features that take into account the modern day threats, its ease of use and the fact that it is light on the system all make it a winner. If you are at all concerned about your cybersecurity – and you should be – and don’t yet have capable security software on your PCs, my recommendation is run, don’t walk, and install it now. A year’s subscription for up to five devices will cost you R500 from Makro or Takealot.com.