Before the introduction of the South African Constitution of the Republic of South Africa, women had no formal recognition as equal citizens. As shocking as that may sound, only in 1996, did the bill of rights rectify this. It was heralded as a cornerstone of democracy in South Africa. The bill of rights and the new constitution enshrined the rights of all people in our country and they continue to affirm the democratic values of human dignity, equality and freedom.

All citizens are protected by an extensive range of rights guaranteed in the new Constitution. The rights to life, dignity, and privacy but women receive specific protections found within section 9, entitled "Equality".

[We] may not unfairly discriminate directly or indirectly against anyone on one or more grounds, including race, gender, sex, pregnancy, marital status, ethnic or social origin, colour, sexual orientation, age, disability, religion, conscience, belief, culture, language and birth.

This specific section of the constitution leaves little room for ambiguity. It clearly spells out the notion that unfair discrimination based on any feature of being a woman should not and will not be tolerated.

The struggle for women’s rights has been a long and arduous journey. The gap in earnings power between men and women is enormous in many parts of the world. Famously, American women earn 79 cents for every dollar a man earns for the same hours worked. That said, significant progress in this regard has been made over the years.

These figures sourced by the OECD (Organisation for Economic Co-operation and Development) show a general downward trend of gender-based inequality with respect to the earnings of full-time workers. 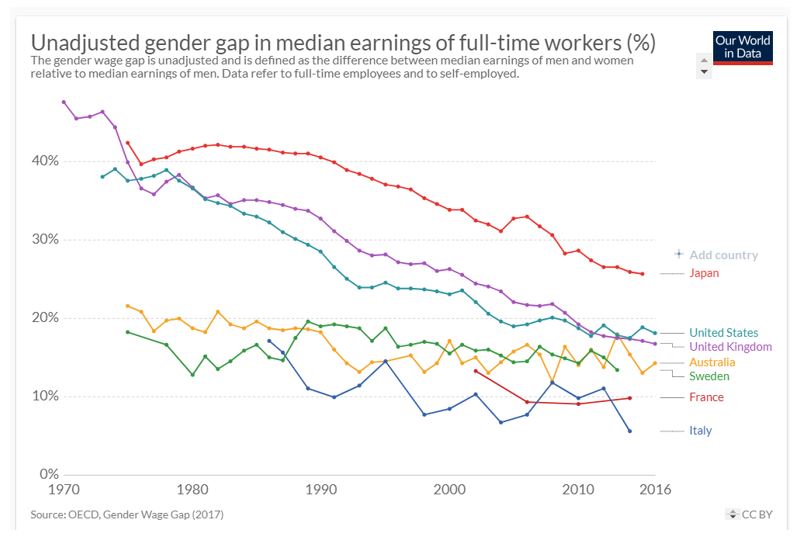 As you can see, the trends are not steady or equal among different countries, but an overall theme is clear. As the conversation around gender inequality matures, the disparity between men and women’s respective earning power diminishes.

Although much progress has been made for the rights of women around the world, the playing field is still far from even. Unfortunately, none of these developed nations has reached 0%, which, in this context, would represent income parity between men and women.

The 2018 Q2 Quarterly Labour Force Survey by Statistic South Africa clearly states that the labour market is more favorable to men than it is to woman, irrespective of race. Although South Africa have come along way and gender representation, women hold less than 50% of highly influential and compensated positions. 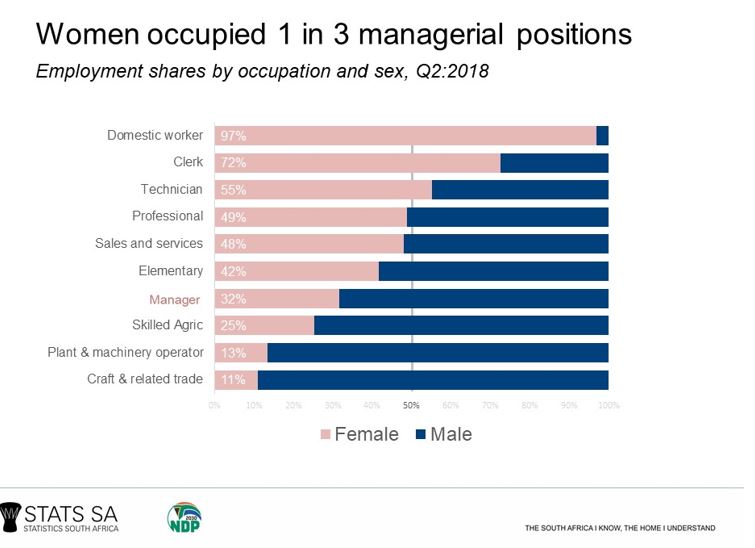 Education as a Panacea

While many of us might cite unequal access to education as a fundamental aspect of the wage gap challenge, there have been some surprising empirical findings that we need to consider. In India, for example, statistical indicators actually show a high level of gender equality within India’s educational system.

According to official statistics, girls’ primary and lower-secondary completion is already higher than boys, and gross tertiary enrollment is at parity. Independent data collected by the NGO Pratham in the ASER surveys find that girls at age 13 are slightly (4%) less likely to be able to solve the hardest questions on a simple mathematics test. While in need of redress, this 4% mathematics gap can hardly explain the horrific economic and social disparities we see in other domains.

This means that in India’s case, girls' schooling might not be an obvious target for change. Whilst the activists and educators that made this fact a reality are truly praiseworthy, in a sense, everything in life is stacked against these Indian girls except for their schooling, yet the spectre of economic inequality looms large.

Despite the seemingly even access to adequate schooling, the World Bank’s WDI(World Development Indicators) record the workforce participation of Indian women at 27%. That indicates that approximately 73% of all Indian women are either unemployed, dedicated to household work, or employed in the informal economy. With this in mind, we might turn our attention to cultural and traditional influences in this respect.

Technology, a Harbour Amid the Storm

A recent World Economic Forum jobs report found that careers within the harbour of the technology industry are projected to be somewhat safer than those of say, office and administrative roles. (Coincidentally, a segment that has traditionally seen an overrepresentation in the number of women employed).

The Computer and Mathematical job family is anticipated by our respondents to experience very high growth centred on data analysts and software and applications developers—not just within the Information and Communication Technology industry but across a wide range of industries, including Financial Services & Investors, Media, Entertainment and Information, Mobility and Professional Services, as computing power and Big Data analytics constitutes a significant driver of employment growth in each.

...employment growth for Computer and Mathematical roles is expected to be least pronounced in the Information and Communication Technology sector itself, hinting at the accelerated demand for data analysis skills and ICT literacy across, and uptake of these tools by, other industries. For example, the Media, Entertainment and Information industry is expecting a flat employment outlook with regard to its core Arts, Design, Entertainment, Sports and Media job family, combined with high growth in the Computer and Mathematical field, as the industry fully embraces its digital transformation.

However, getting into the tech industry is certainly not for everyone. Where most service industry roles involve a need for good people skills and an ability to get along with others, in technology, the skills required are of a different order. If a prospective employee wants to specialise as a technical resource in say, database administration, for example, they then have the task of determining which technology platform to adopt and which programming languages to hone. This is the rocky uphill road of skill development. It requires an unusual blend of even-tempered patience and dogged determination to mould oneself into a proficient technical expert.

It’s no secret that when it comes to the science, technology, engineering, and maths (STEM) industries, there’s still a significant imbalance. With a potentially turbulent job market, these imbalances may prove to be all the more pivotal in how income and responsibility are distributed in society.

While men have a pantheon of technological heroes to choose from, women are often limited in their options. However, there are great female leaders in tech and even though finding a mentor can be difficult at times, it is certainly possible. Moreover, being a woman in the tech industry certainly comes with its challenges, often in the form of discrimination. However, if anything, let it motivate you to play the game and play to win. 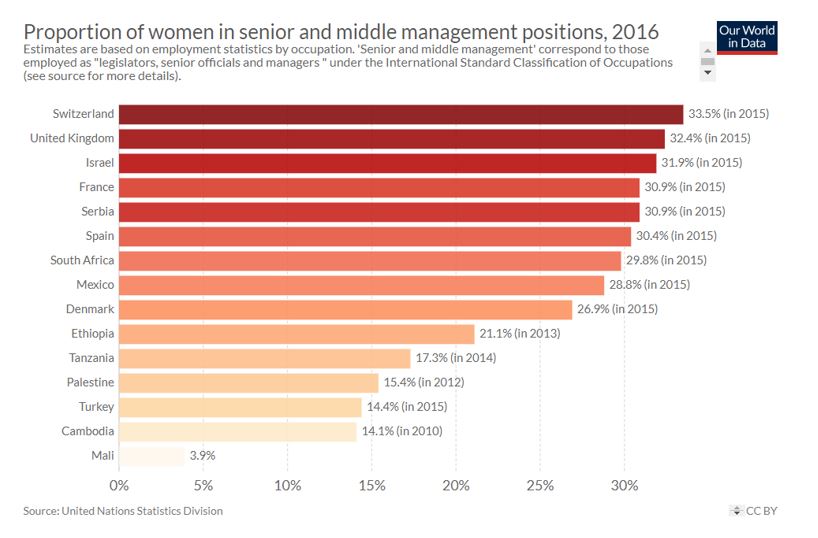 Heroic role models play a massive role in the development of professional identities. Once a spark of inspiration has been lit, determined young professionals can propel themselves to achieve incredible things, provided they harness their time and resources effectively.

Instead of nonchalantly accepting the status quo, it’s important that organisations large and small, seek to inspire the next generation of creators, decision-makers and thought leaders. We can, and should, do so by openly sharing the fantastic work that is being done by pioneering women around the globe. By showcasing prominent females making waves in their industries, we can encourage the problem solvers of tomorrow to aspire towards greatness in a similar fashion.