It is no secret that Google’s Android mobile operating system (OS) and Apple’s iOS platform are leading the way in the smartphone OS landscape. However, the latest research from market research firm Strategy Analytics’ (SA’s) Wireless Smartphone Strategies (WSS) service, has revealed to what extent, since combined they account for a record 92% share of all smartphones shipped worldwide during Q4 2012.

The analytics company estimates that 152.1 million Android-operating smartphones were shipped globally in Q4 2012, almost double Q4 2011’s tally of 80.6 million. Android’s share of the worldwide smartphone market increased from 51% to 70% during the past year, snapping up market share from rival platforms the likes of Symbian and Bada. 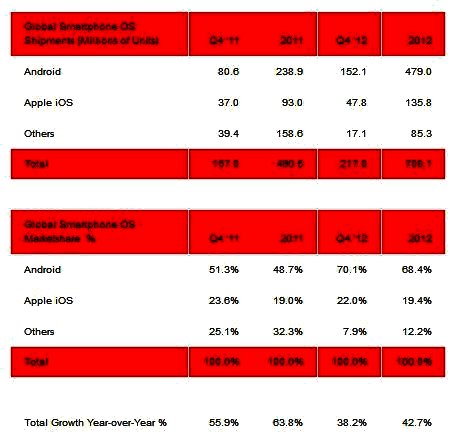 SA asserts that Android’s challenge for 2013 will be to defend its dominant market position, not just against iOS but also against a fresh mobile platform onslaught by hungry challengers that includes Microsoft’s Windows Phone OS, RIM’s (Research In Motion’s) BlackBerry 10, Firefox OS as well as Tizen.

Cupertino’s iOS grew by 29% year-on-year in terms of volume, as the company shipped 47.8 million iPhones worldwide in the last quarter of 2012. This provided the firm with a 22% market share, slightly down from Q4 2011’s 24%. According to SA, the global smartphone industry has effectively become a duopoly as consumer demand polarised around mass-market Android-running devices on the one end and premium Apple smartphones on the other.