Smartphone sales continued to be the driving force of the mobile industry during 2012, as global smartphone shipments increased by 43% annually to reach a record 700 million units. This according to the latest research from market research firm Strategy Analytics’ (SA) Wireless Smartphone Strategies service.

SA did however note that the slowdown in market growth from 64% in 2011 to 43% during 2012 is indicative of the maturing level of smartphone penetration within developed regions including the US and Western Europe.

Korean tech giant Samsung was the best performer, capturing 30% market share worldwide, extending its lead over rivals the likes of Apple and Nokia in the process. Samsung shipped a record 213 million smartphones globally, with SA stating that this is largest number of units ever shipped by a smartphone vendor within a single year, comfortably surpassing Nokia’s previous all-time record of 100.1 million units during 2010.

During 2012, Samsung delivered a number of hit mobile devices ranging from top-end performers like the Galaxy Note II (review) phablet through to mass-market devices such as the Galaxy Y.

This figure provided Cupertino with a 19% market share in 2012, matching its 2011 market share exactly. SA asserts that Apple had a strong year in developed regions including its home turf of the US, but its performance was offset partly by its limited presence within fast growing emerging markets the likes of Africa. 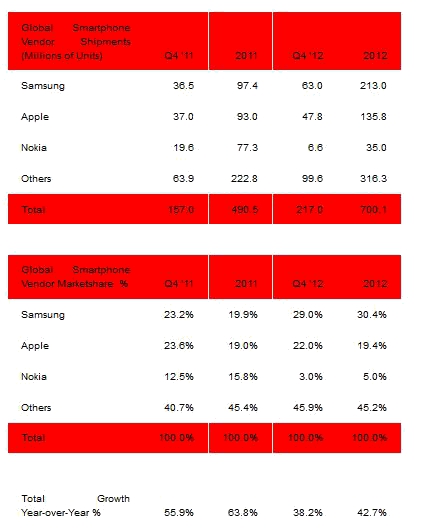 Together, Samsung and Apple accounted for half of all smartphones shipped worldwide last year. SA stated that huge marketing budgets, extensive distribution channels as well as attractive product portfolios have enabled the two tech giants to tighten their grip on the smartphone industry.

The research company added that the growth of Samsung and Apple continues to impact Finnish phone giant Nokia, which retained its position as the world’s third largest smartphone vendor for full-year 2012.

Espoo’s global market share decreased sharply from 16% to just 5% during the past year, but managed to boost its Windows Phone OS smartphone portfolio with the introduction of new models including the Lumia 920 (review). SA is of the opinion that Espoo still lacks a true hero model in its range that can be considered an iPhone 5 (review) or Galaxy S3 (review) killer.