Despite a projected record number of smartphone shipments for the upcoming holiday shopping season, market research company International Data Corporation (IDC) forecasts that the worldwide mobile phone market will only grow 1.4% year-on-year during 2012. This will mark the lowest annual growth rate in three years.

IDC asserts that this strong showing in terms of smartphone growth is a result of a variety of factors, including generous device subsidies from worldwide carriers and an ever-expanding array of more affordable entry-level smartphones within emerging markets.

He said that Android is expected to stay ahead of its platform rivals, but in the same breath, its dominant position means that this popular OS is also the biggest target for competing operating systems to snag market share from.

Llamas added that Windows Phone OS stands to gain the most market share since Microsoft’s original equipment manufacturer (OEM) and carrier partners have already gained valuable experience in selling the differentiated experience this smartphone OS has to offer. 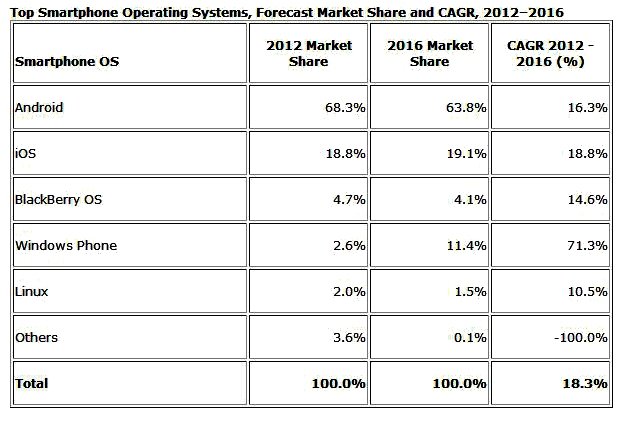 As can be expected Google’s Android is forecasted to lead the mobile operating system (OS) charge, due mainly to a broad selection of devices from a wide range of hardware partners.

Samsung is the leading Android smartphone seller, but IDC said that neither LG Electronics nor Sony must be overlooked, since both of these firms managed to crack the Top 5 smartphone vendor rankings during Q3 2012. IDC believes that Android will claim 68.3% of the smartphone market this year and still dominate with a market share of 63.8% by 2016.

Apple’s iOS will maintain its runner-up spot on the mobile platform podium behind Android at the end of 2012 as well as throughout the forecast period. The popularity of the iPhone across multiple markets will drive steady replacements and additional carrier partners, which assists Apple in increasing the market volume of iOS.

Due to the high price point of the iPhone relative to other smartphones, Apple’s smartphone will remain largely inaccessible for a lot of buyers within many emerging markets. In order to maintain current growth rates, the Cupertino-based tech outfit needs to examine the possibility of offering less expensive version of the iPhone, IDC stated.

According to IDC, RIM’s (Research In Motion’s) BlackBerry OS will grow slowly, but still manage to maintain its market share over the coming years following the launch of BlackBerry 10 next year.

The market research firm stated that RIM’s new OS and the smartphones based upon it will be highly valued by some longtime BlackBerry fans, enabling the Canadian company to hang onto its pockets of market strength in higher-growth emerging markets.

Globally though, IDC asserts that the overall success of this new platform will be partly dependent upon channel advocacy.

Microsoft’s Windows Phone OS will battle against RIM’s BlackBerry OS for the number three spot during 2013, according to IDC. Windows Phone OS will build on the progress it made this year, with Nokia establishing its presence and HTC solidly jumping back into the race. The firm also believes that contributions by other OEMs such as Samsung, ZTE, and Huawei will help Windows Phone OS grow its worldwide footprint.

IDC stated that Linux will continue to lag behind the market leaders throughout its forecast, but the open-source OS is still expected to be the dark horse of the forecast. This due to the fact that multiple Linux-based smartphone platforms will be launched next year, including Samsung and Intel's Tizen as well as Jolla’s SailFish. Developer interest in these new OSs might be prompted by the fact that both of these new platforms have ties to the now defunct MeeGo.

“Sluggish economic conditions worldwide have cast a pall over the mobile phone market this year,” said Kevin Restivo, senior research analyst with IDC’s Worldwide Quarterly Mobile Phone Tracker. “However, the fourth quarter will be relatively bright due in part to sales of high-profile smartphones, such as the iPhone 5 and Samsung’s Galaxy S3, in addition to lower-cost Android-powered smartphones shipped to China and other high-growth emerging markets.”

In related news, IDC also recently revealed that Android handled the operating on three out of every four smartphones that were shipped during Q3 2012.
TAGS:
IDCsmartphonemobile phoneiOSAndroidmobile OS
USER COMMENTS