Tech giant Google has released the latest Android mobile operating system (OS) usage information, revealing which version of the platform is used most on user’s smartphones and tablets. These figures were compiled from data Google collected during a two week period that ended on 3 January 2013.

In these warm summer months, more mobile device users are looking to cool down with the frozen OS delicacy called Ice Cream Sandwich (Android 4.0.3 - 4.0.4, ICS). This version of the OS is now utilised on 29.1% of all Android-powered mobile devices, up from last month’s 27.5%.

With smartphones being released that run Jelly Bean (Android 4.1 - 4.2) out of the box and updates rolling out for current devices, the latest version of Android has increased its usage share from 6.7% to a notable 10.2%.

It is an encouraging sign to see all the older Android editions with decreased usage tallies. The oldest amongst them Cupcake (Android 1.5) has totally disappeared off the mobile OS scene, as it is no longer part of the company’s usage information, whilst Donut (Android 1.6) registered a minute drop from 0.3% to 0.2%. Eclair’s usage figures are also in a slight nosedive from 2.7% last month to 2.4% this month, with the tablet-only Honeycomb (Android 3.1 - 3.2) almost unchanged from 1.6% to 1.5%. 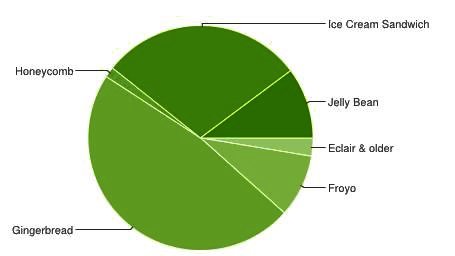