DStv has announced the launch of BoxOffice, its Video-on-Demand (VoD) service for South Africa, which gives subscribers the opportunity to rent the latest Hollywood blockbusters from the comfort of their home.

This service will be launched to DStv Premium subscribers with PVRs (personal video recorders) from today (22 July 2011), at an introductory price of R25 per title.

A maximum of 15 movies will be available at any one time, with new movies added as they are released for the BoxOffice service by Studios. The number of movies is limited due to storage constraints on the current PVRs. Some of the titles currently available include Black Swan, The King’s Speech, Due Date and 127 Hours.

The best yet to come

The BoxOffice service will be rolled out in several phases. The first phase is the launch of a satellite-based value added offering to DStv Premium subscribers via their PVRs. The next phase, which we are really exited about, is an online offering much like Netflix in the States. This will be available to all South African broadband users (Mac and PC) and not just DStv subscribers, before the end of this year. Up to 150 titles are expected to be added, restricted to blockbuster movies and not including popular series.

So how does the PVR BoxOffice service work? Using the service is easy, as users simply have to press the green button on their PVR remote and follow the steps on their television screen. BoxOffice movies are readily available for viewing, as these are pre-loaded onto users’ PVR decoders already. Users would have to have their cellphones ready, since text messages need to be sent to activate the BoxOffice service and to unlock selected movies.

Payment is done through monthly debit order or by pre-loading funds into your account or via credit card. Once a movie is rented, it can be viewed multiple times within a 48-hour period. As an introductory offer, users’ first BoxOffice movie will be free of charge.

According to Imtiaz Patel, Group CEO of MultiChoice South Africa:“The BoxOffice service is a result of our continuous drive for innovation. The future of DStv relies on us offering simplicity and convenience to our subscribers in a changing world. Last year we introduced DStv On Demand and BoxOffice is the next step in the DStv product evolution.” 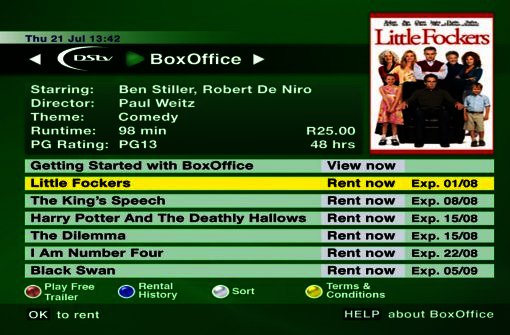 One of the BoxOffice menu screens.
Available selection of movies

Approximately 150 blockbuster movies from most of the major Hollywood studios will be released on the BoxOffice service during the course of a year. Studios generally release VoD movies in a similar timeframe as they become available for home DVD rentals, generally about 4 - 6 months after coming off the circuit.

“BoxOffice positions DStv as a front-runner in the VOD market in South Africa,” stated John Kotsaftis, CEO of DStv Online.

“This service aligns South Africa with global developments in on-demand video. Offering a VOD service via satellite initially, allows us to make it widely and instantly available to our subscribers, regardless of constraints in broadband availability in South Africa.”