According to the latest research from market research firm Strategy Analytics, global handset shipments grew 14% annually to reach 390 million units in Q3 of 2011. 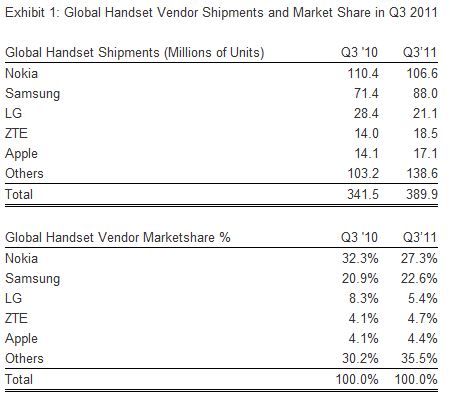 “ZTE was the star performer as it captured 5% market share and overtook Apple to become the world’s fourth largest handset vendor. ZTE’s growth is being driven by competitive pricing of entry-level models for feature phones and Android smartphones.”

“The recent Microsoft Lumia announcements have come at a good time to help Nokia’s stagnant smartphone volumes. Hot on Nokia’s heels, second-ranked Samsung continued to grow and reached an all-time-high marketshare of 23%, fuelled by robust shipments of its high-end Galaxy S2 superphone.”

Another report from the company showed that Samsung managed to surpass Apple to become the world’s number one smartphone maker in Q3 of 2011. Smartphone shipments increased by 44% annually to reach a record 117 million units in Q3 of 2011.

Spektor stated that: "Samsung shipped 28 million smartphones and overtook Apple to become the world's largest smartphone vendor by volume with 24% market share. Samsung's rise has been driven by a blend of elegant hardware designs, popular Android services, memorable sub-brands and extensive global distribution. Samsung has demonstrated that it is possible, at least in the short term, to differentiate and grow by using the Android ecosystem."

“We believe Apple's growth during the third quarter was affected by consumers and operators awaiting the launch of the new iPhone 4S in the fourth quarter, volatile economic conditions in several key countries, and tougher competition from Samsung's popular Galaxy S2 model."

Tom Kang, also a director at Strategy Analytics provided a perspective on Nokia: "Nokia reached 14% global smartphone share in Q3 2011, more than halving from 33% in Q3 2010. The transition from Symbian to Microsoft as Nokia's main smartphone platform has clearly been a very challenging process this year.”

“The recent launch of the new Microsoft Lumia portfolio has helped to raise Nokia's profile, and Nokia will be hoping the partnership with Microsoft can drive at least an L-shaped recovery in its global smartphone market share over the next few months." 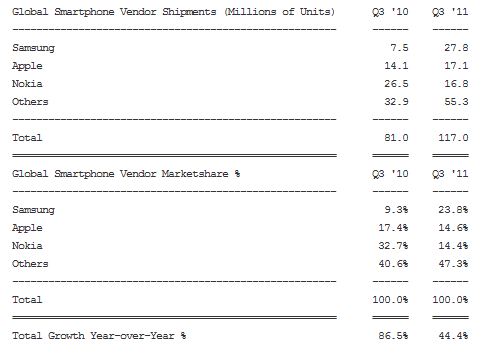