We at TechSmart recently had the opportunity to play through some preview code of THQ and Kaos Studio's upcoming first person shooter Homefront. The shooter is set in the near future, the year 2027 to be exact, and sees the player as an outgunned and outnumbered resistance fighter in the occupied United States.

The moment you start Homefront for the first time players are greeted not with a slick cutscene and a rock 'n roll track playing in the background, but instead with a grainy, real life news broadcast of Hillary Clinton blaming the 2010 sinking of the South Korean warship, the Cheonan, on a North Korean torpedo.

This is followed by a barrage of newsreels, showcasing the US's role in various conflicts around the world, the deepening energy crises and the death of North Korean dictator Kim Jong-il. His son Kim Jong-un replaces the dictator as the ruler of North Korea, which in a series of conflicts seize South Korea, Japan and several other East Asian countries, forcing the US to retreat from its Pacific bases.

Now, it's the year 2025, North Korea has become known as the Greater Korean Republic (GKR) and has surpassed the US as the world's largest superpower. Under the veil of improving relations, the regime launches a communications satellite which is actually a giant EMP (electro-magnetic pulse), knocking the US off the grid in one strike, opening up the door to a full scale military invasion...

Home is where the war is

Homefront's story is something different to that of most FPS games on the market, and it's clear that the developers put a lot of work into crafting as sound and believable a story as possible. Some of you war movie buffs out there may already know that the game's writer is none other than John Milnius, the man responsible for classics such as Red Dawn and Apocalypse Now.

As we thoughtfully digested all that the game's intro had thrown at us we started off our first foray into occupied America. During the game players take on the role of ex-pilot Robert Jacobs, and from the start it's clear that this isn't going to be a comfy ride. Starting off in our in-game hometown of Montrose, Colorado, we're quickly forced onto a waiting prison bus by GKR troops.

As the bus trundles along the broken and busted streets the real feeling of Homefront starts coming through as we see previously peaceful suburbia turned into a disaster scene. GKR troops and police can be seen everywhere, the air reverberates with the sound of loudspeaker propaganda as families and loved ones are forcefully separated, their screams of anguish drowned only by the barking of guard dogs. 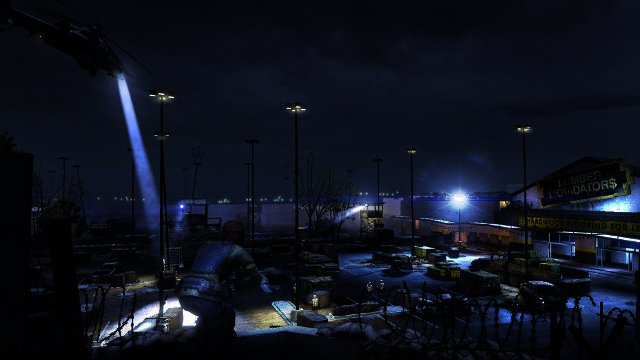 As civilians line the streets in pathetic huddled masses, we suddenly see a man freeing himself from the grip of a GKR trooper and try to make a run for it, only to be shot down in his tracks, blood from the gunshot wound to his head splattering across the bus windows. This scene may sound like something out of World War 2 Europe, but this is Homefront, this is the grim reality of brutal military occupation, and the suffering of the people around you heavily sets the tone of the game and gives you more of a reason to fight.

Just as it looked like we were going to have to start getting used to working in the gulag, our bus is violently rammed from the side by what we later discover to be a resistance vehicle. As we're lying in broken glass, still reeling from the impact a hand comes down, pulling us from the battered wreckage and effectively signalling the start of our service in the American resistance.

Escaping from the mangled wreckage we're introduced to Connor and Rianna, two members of the resistance with somewhat differing views of warfare. Grabbing a weapon from a nearby soldier we follow them as we head out into suburbia, now an endless maze of fire fights, ambushes and pedicured garden hedges. As we run past deserted shops sporting familiar labels the game takes on a fast-paced FPS feel as we're confronted by GKR forces.

Combat in the game isn't exactly a revolutionary step in the FPS genre, but it felt smooth and well-oiled as we familiarised ourselves with the core mechanics. The weapons feels nice, with iron sights or a scope ready for more accurate aiming. 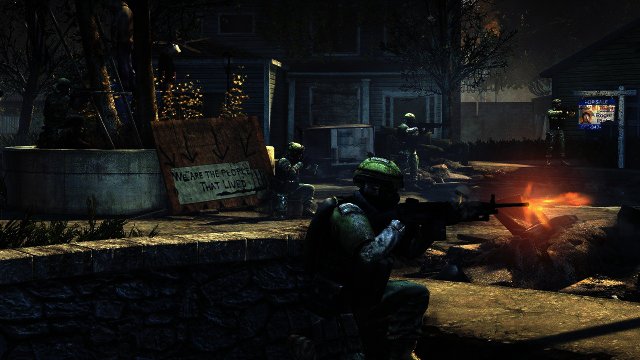 Playing through the demo on hard difficulty we were happy to see that this wasn't another first person seaside picnic, the AI actually responded with some manner of self preservation, making good use of environmental cover and laying down a wall of lead if you start getting too Rambo for your own good.

And unlike other games in the genre, all the battles don't take place in conveniently empty parking lots and hangers. Civilians scatter as gunfire starts up, with one scene forcing us to take cover inside a house with a mother cradling her crying infant as we fight to keep GKR troops from advancing into the house. In this particular scene the player has the power to help save the civilians involved, but in many others there is no such option, with a particularly powerful scene showing an infant witnessing the murder of his parents coming to mind. One thing is clear in Homefront, the game isn't scared of showcasing the grim realities of war.

Continuing through the demo missions we're introduced to the Goliath, a remote controlled drone vehicle which can be used to rain down precision missile fire on enemy positions and armour. We're also introduced to a wide variety of conventional weaponry, from the classic M4 to our current favourite, the wonderful M110 semi-automatic sniper rifle.

On a more peaceful note (at least for now), we're taken to one of the main resistance camps, a small commune of people living together in the sea of ruined suburbs, which is good for camouflage at least. Here players can walk around and interact with the inhabitants of the camp, hearing about their stories in the ongoing conflict.

Throughout our brief experience with the upcoming game, one thing was clear, Homefront has emotional power unlike any other FPS. The game doesn't shy away from the grim scenes of war, with us uncovering a scene where bulldozers are dumping bodies, some in body bags, others still clothed, into a mass grave at a city dump. After witnessing the horrid scene we were then introduced to the other side of brutality as Connor deploys phosphorous rockets to burn GKR soldiers alive, telling us to let them burn instead of shooting them.

At the end of the day, Homefront seemed like a solid FPS, fairly standard when it comes to gameplay, but quite revolutionary when it comes to content. The final game will support 32-player multiplayer battles, and the game is coming out on PC, Xbox 360 and PS3 this Friday (the 18th of March).

TechSmart played a pre-rendered copy of Homefront which might differ from the final version in terms of handling and looks.