Lenovo touts the benefits of Yoga

Lenovo has announced two very interesting convertable ultrabooks and a Windows RT notebook, with their own unique twist on the crop of Windows 8 and Windows RT offerings that we are seeing making their way to market.

These include two devices aimed at general users, the IdeaPad Yoga 13, and the IdeaPad Yoga 11, billed as a “svelte, all day mobile companion”. Professional and business users have not been left out of the fold though, as the company launched its ThinkPad Twist.

Boasting a “revolutionary” hinge, the Yoga 13 and the Yoga 11 can move 360° and fold from ultrabook to tablet in one motion. At its heart, the Windows 8 powered Yoga 13 contains an 3rd generation  (Ivy Bridge) Intel Core processor and up to 8 GB of memory, while accommodating up to a 256 GB solid state drive (SSD)  within a slim 16.9 mm frame.

As you would expect from an ultrabook named after a health conscious activity, the Yoga 13 weighs in at a light 1.54 kg, which is certainly not going to break anyone’s back. Additionally, the company has promised that users will be able to take advantage of a solid eight hours worth of battery life on a single charge.

However, its namesake really comes from the fact that, at the flip of the hinge, the Yoga 13 transforms into a media-friendly tablet, with a high definition (1600 x 900) 13.3” IPS display. Naturally, the screen supports multi-touch and gesture control, as would be expected on any tablet. 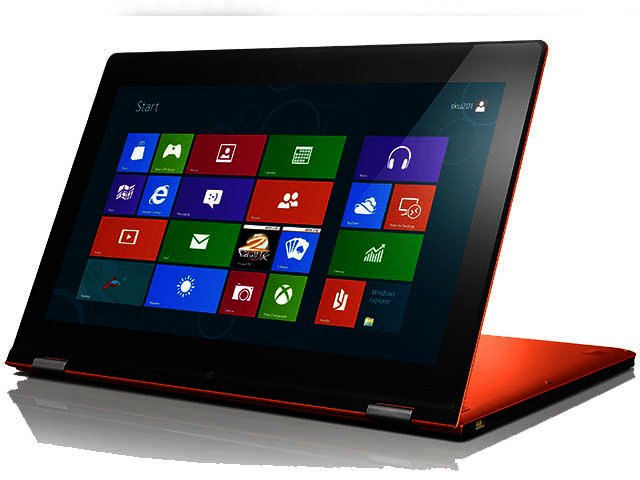 The IdeaPad Yoga 13 can twist itself into a stand for watching movies, as well as serve as an ultrabook and a tablet device.
“Our family of ultrabook convertibles addresses the unique needs of consumers, businesses and everyone in between by creating high performance laptop-tablet combinations in new designs and different sizes,” explained Oliver Ebel, executive director and general manager for Lenovo in the Middle East and Africa (MEA).

“We think these innovative convertibles are the best devices for a groundbreaking touchscreen experience, plus their multi-modes give people even more ways to use their PC,” he continued.

The other notebook on offer, the IdeaPad Yoga 11, is not just its bigger brother’s smaller counterpart. Instead, the Windows RT device has some impressive specs of its own. These include the presence of the Nvidia Tegra 3 processor – which the company enthuses is “the world’s only quad-core processor for Windows RT” – an even slimmer profile of 15.6 mm, and a considerable thirteen hour battery life.

Both devices can adopt a couple of other poses. Instead of the Downward Dog or The Warrior, users can cajole the devices into adopting the pose that is more commonly referred to as a Stand, by flipping the keyboard behind the screen, which is useful for watching movies and viewing pictures. Another posture in the Yoga’s range is The Tent, in which they are bent upright for playing games or video chatting. 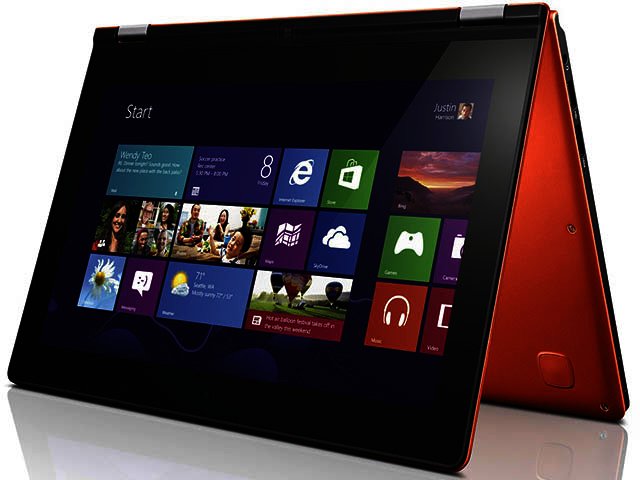 The IdeaPad Yoga 11 is Lenovo's new Windows RT notebook.
“The IdeaPad Yoga 11 is elegant, thin and light, combining the convenience of a tablet with the capability of a notebook,” commented Rene Haas, vice president, Notebook Business Unit, Nvidia. “Powered by the energy-efficient Tegra 3 processor, the Yoga 11 lets you work and stay connected all day long – and leave your charger at home,” he asserted.

Small business with a twist

Like with its Yogic counterparts, the business-centred 12.5” ThinkPad Twist also switches form, in its case, from being a performance-centric ultrabook to a convertible tablet. This somewhat harkens back to the age of the mid-2000’s idea of what tablet computing was all about.
In the specifications department, the device is no slouch, as it boasts a 3rd generation Core i7 processor, up to 8 GB DDR3 memory and a choice between a 128 GB SSD or, if you are willing to give up the ultrabook name and fast boot times, a more capacious 500 GB hard drive.

While its display lacks the Yoga 13’s high resolution, and instead offers a middling 1366 x 768, it boasts plenty brightness, namely 350 nits. The company has asserted that users can expect a nearly all-day battery life, and tablet-like resume speeds from standby, along, of course, with Lenovo’s highly regarded keyboard and two USB 3.0 ports.

“Lenovo was one of the first to embrace convertible design coupled with touch interaction in a big way and the Yoga 13 and ThinkPad Twist are both remarkable devices that are sure to wow consumers,” commented Kirk Skaugen, corporate vice president and general manager, PC Client Group, Intel.
“These designs fueled with powerful Intel 3rd generation Core processors will deliver the key attributes of the PC and tablet into a single system—essentially people are getting ‘two for one’.”

Both Yoga devices are currently receiving favourable reviews overseas. The good news is that, for once, we know when we can expect to roll out the welcome (or yoga) mat for their arrival towards the end of this year.

Additionally, prices  have also been announced, with the IdeaPad Yoga 13 coming in from R14 000, the IdeaPad Yoga 11 sporting a R10 200 pricetag, while the ThinkPad Twist will turn your wallet upside down to empty out R12 000.