After a bout of speculation about what exactly it would reveal, Microsoft unveiled not one but two of its own tablet devices this week, rather oddly named Surface.
The first of these is the Surface for Windows RT tablet, which sports an NVIDIA Tegra-based ARM chip and a 10.6” (rather than industry standard 10.1”) ClearType HD capacitive touchpanel, in both 32 GB and 64 GB flavours.The 9.3 mm thick device, which will weigh in at 676 g, sports a microSD slot and USB 2.0 port.
The second tablet, equally as cumbersomely named the Surface for Windows 8 Pro, will boast an Ivy Bridge Intel Core i5 processor, 10.6” ClearType Full HD (1080p) capacitive touchpanel, and come with either 64 GB or 128 GB of storage.

On the processor power though, Microsoft has to be given its due - the ability to have a notebook’s or desktop’s processing power in a tablet form is certainly enticing. It will also be quite a bit heavier and thicker than the Surface for Windows RT tablet, with a weight of 903 g and a thickness of 13.5 mm. It will offer a microSDXC slot, USB 3.0 port, and Mini DisplayPort.

One feature that did pique our curiosity is that the Surface for Windows 8 Pro device will apparently support a pen input, and cater to applications from the likes of Autodesk, who are behind the excellent Sketchbook Pro app. This could mean that the device becomes a viable tool for sketching, drawing, notetaking and digital inking, but on that front we will have to wait and see how well it performs.

Taking a leaf out of Asus’ Transformer playbook, the tablets are accompanied by a TouchCover, which snaps onto the tablet magnetically and adds a keyboard and touchpad, effectively turning the Surface into an ultrabook type device.

Additionally,the Surface tablets will be able to employ a kickstand to view content. 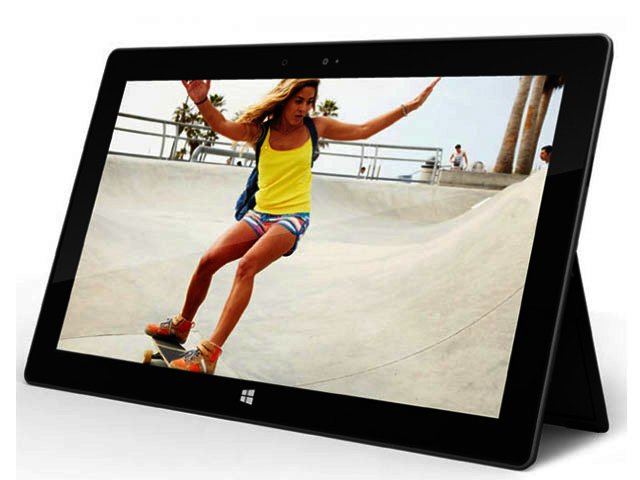 The Surface tablets will be able to cater to content consumption, and in the case of the
Surface for Windows 8 Pro, content creation.
Why so secretive?

Additionally, exact battery life was not specified, a fact we find worrying considering that mobile devices live and die by their battery life. While tablets that can exceed the ten hour mark are applauded, those that hover in the five to six hour range are at best ignored, at worst, mocked.

Besides from the presence of the Ivy Bridge Core i5 processor on the Surface for Windows 8 Pro, we have to admit to feeling somewhat underwhelmed. At this stage of the tablet game, we were secretly hoping that Microsoft would knock our socks off, practically make us rethink tablets in general and generate real excitement around a third addition to the tablet ecosystem.

At sometime in the near future, when these tablets actually become available, it might just do that, but right now, the announcement left us feeling more ambivalent than intrigued or excited.

Exacerbating our disappointment is the fact that Microsoft did not announce groundbreaking new services that take advantage of its Skype acquisition or recent partnership with Barnes and Noble, or even anything that leveraged its Xbox Live service. It made greater sense to us that the company could attack Amazon’s Kindle market rather than attempt to compete with the iPad, which we hoped would mean more viable, smaller tablets in the 7 to 8” range coming out of Redmond.

However, mitigating the doom and gloom somewhat is the fact that some sites at least, such as PCMag and The Verge are somewhat more optimistic about Surface’s launch, even if they agree with many of our concerns.

Finally, the elephant in the room at the moment revolves around that most critical factor: price. Exact pricing details of both devices were not disclosed, other than a promise that the tablets will be “competitively priced.”
We suspect that any device priced significantly higher than the iPad will struggle, while pricing the Surface for Windows 8 Pro tablet in the region of an ultrabook may expose what users are really willing to pay for the privilege of a keyboard and processing power.
While the aforementioned Surface tablet looks like it is aiming to fill both tablet and ultrabook niches simultaneously, the unanswered question is still how good it will be at accomplishing either, and whether it can actually derail the momentum that the iPad and various ultrabooks have been building to date.
TAGS:
MicrosofttabletsSurfaceWindows RT tabletWindows for Windows 8 Pro
USER COMMENTS