BlackBerry maker Research in Motion (RIM) has released the latest (up to end of May 2011) mobile operating system (OS) breakdown information for BlackBerry users who are downloading apps from its BlackBerry App World application store.

Based on the figures (updated quarterly) from this breakdown, one can see that it’s not only Google that have to contend with OS fragmentation with its Android mobile OS.

Almost a year after the release of BlackBerry 6 OS, less than one out of five (18%) of BlackBerry users employ devices like the BlackBerry Torch 9800 and BlackBerry Bold 9780, which are running the latest available version of the Canadian company’s mobile OS (BlackBerry 7 OS is still forthcoming).

The data also reveals that the majority (50%) of users utilise smartphones operating on BlackBerry 5 such as the BlackBerry Bold 9700 and BlackBerry Curve 8520. Almost a third (32%) of BlackBerry users, however, still make use of mobile devices that operate on an outdated, pre-BlackBerry OS 5 version of the OS. 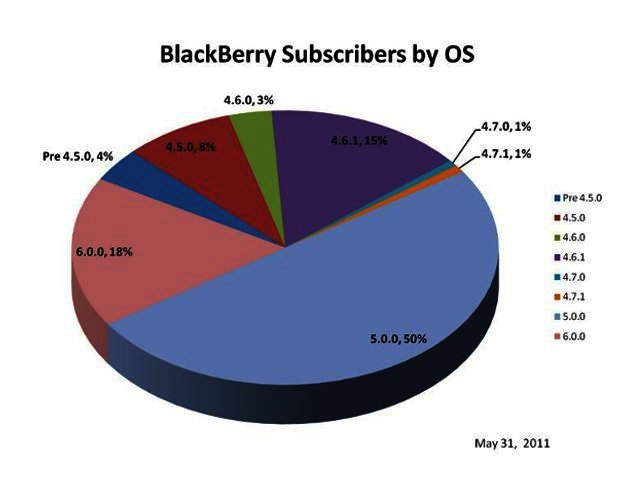 These figures will only be more fragmented as RIM readies to release forthcoming devices such as the BlackBerry Bold 9900 and 9930 this summer in the States (winter for us). The company will also reportedly follow BlackBerry 7 OS up with a QNX developed OS next year, which is similar to the one powering its BlackBerry PlayBook tablet.

Last week news broke of an anonymous open letter posted by someone claiming to be a high-level RIM employee. In this letter to the RIM senior management team, the person notes his concern around the direction in which the company is moving in. Even though BlackBerry maker RIM doubted the authenticity of the letter, it posted a response to it in the same day.