As hinted at last week, Samsung has indeed launched a 7.7” Galaxy Tab, alongside its newly announced smartphone-tablet hybrid the Galaxy Note. The 7.7” is yet another form factor from Samsung, joining its original 7” Tab, its 8.9” tablet and it 10.1” Galaxy Tab. However, according to the company, the 7.7” is laying claim to being the first tablet to feature a Super AMOLED Plus display, with a 1280 × 800 (WXGA) resolution. Given the strength of the Galaxy Tab 10.1’s screen, we have high hopes for how this resolution will look on an even smaller screen.

The device, which will be 7.89 mm thin, will include 8 GB of internal memory, and will come in 16 GB, 32 GB and 64 GB flavours. This can apparently be further expanded, as the device will support microSD cards up to 32 GB. Additional features of the device will include Wi-Fi Channel Bonding, which enables bonding two channels into one for improved network connection and data transfer at up to twice the speed, and up to ten hours of battery life due to the inclusion of a 5100 mAh battery. The Galaxy Tab 7.7 will run Android 3.2 Honeycomb, which the company explained has been optimised for a 7” tablet with a new compatibility zoom mode. This is intended to enhance applications that are not designed to run on larger screen sizes, enabling them to fit on the entire screen without distortion. 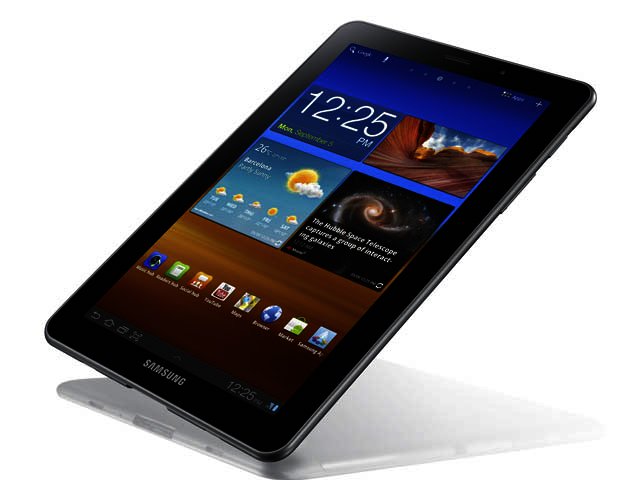 JK Shin, the president and Head of Samsung’s Mobile Communications Business, asserted that the Galaxy Tab 7.7’s ultra-thin design and WXGA Super AMOLED Plus display are “impressive differentiators in the tablet marketplace and pillars of our ultimate goal of meeting a wide variety of consumer needs.”

“The new Galaxy Tab 7.7 demonstrates the company’s commitment to offering consumers the most choice in the mobile tablet market,” he added. With the steady release of different size devices, this appears to be Samsung’s strategy in capturing its share of tablet users; whether the 7.7” form factor will be a hit with users remains to be seen. Pricing and availability has not yet been announced.