As of 5 September 2011, Vodacom will be extending its reduced rate Super Saver and Vodafone Passport products to many more countries. The company will also introduce International Voice Bundles for all customers at a flat fee for all countries.

The mobile operator has also enhanced its current Vodafone Passport offer, which allows international roamers to make calls at South African call rates to other countries. This means, that Vodacom has now increased the footprint of countries where Vodafone Passport is available, from 16 countries to 64 countries.

For example, a customer on a Talk 500 package who has not activated Vodacom Passport, who makes a five minute call to South Africa while roaming abroad, would normally pay R115 for the call. If this customer activates Vodacom Passport, the customer will only pay R25.20 for the same call, resulting in a 78% saving.

Portia Maurice, Vodacom’s chief officer of corporate affairs said: “The world is a global village and we have to find ways to make connectivity while travelling more affordable and the experience a more convenient and predictable one. We are also constantly negotiating with international networks to bring roaming rates down for our customers but we heavily depend on them in this regard.” 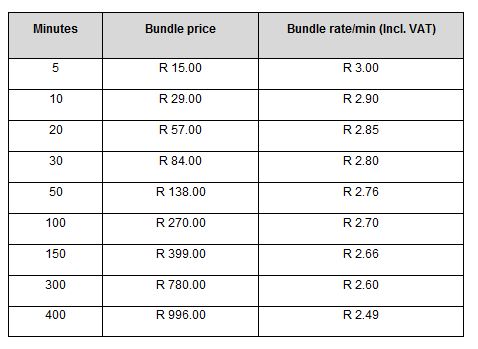 In related news Vodacom and Research In Motion (RIM) have announced that the BlackBerry PlayBook (review here) tablet is now available in South Africa.