While we were somewhat taken aback that Bear Grylls favours Gerber’s multitools to Leatherman’s, we would not be at all surprised to see the outdoor survivalist pull out Olympus’s TG-1 Tough camera when out in the middle of nowhere.
Not only does it take images as one would expect from a compact camera; like the aforementioned multitool, it too has some nifty features and surprises of its own tucked away.
Built to endure
First things first though; the compact camera is built to live up to its name. The camera looks and feel solidly made, encased in a good amount of steel, down to the handle for its strap. Additionally, Olympus has taken care that all the relevant slots, for the battery and SD card, are secured behind two switches that have to be disengaged before the slot can be opened, which means the likelihood of a slot accidentally opening is minimal while ensuring that the camera is waterproofed.
The 12 megapixel camera is also able to withstand some outdoor abuse, as it boasts being waterproof to 12 metres, shockproof up to two metres and able to endure up to a very chilly -10°C. Thus if you ever fall off a two metre high cliff into a pool of water in the cold winter, at least the camera should be ok (we can’t say the same for you).
While it can only claim a modest 4x optical zoom (a 25 – 100 mm equivalent), which is a far cry from 30x zoom boasted by some portable cameras, the TG-1 does offer full HD (1080p) video, accessed via a dedicated video record button. 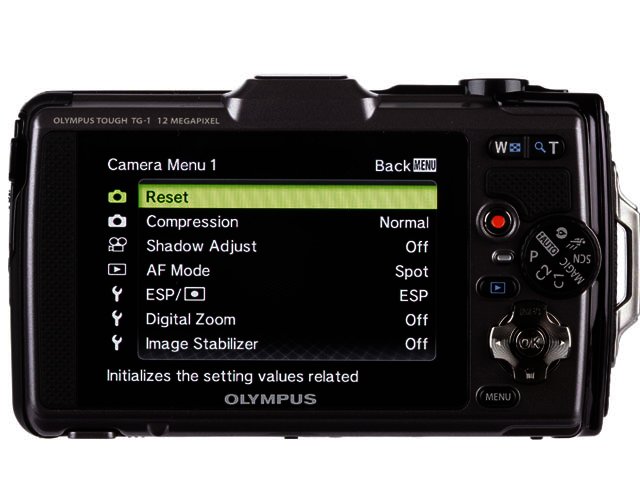 The TG-1's menus are intuitive and logically presented, while the camera's controls
are similarly accessible.
This is modeness!
Much like we have come to expect from Olympus, there are a variety of easily accessible scene modes on offer, such as landscape, portrait, night scene, night scene+portrait, sunset, beach and snow, and even indoor, should you want to venture into a jungle of the concrete kind. Along with panorama and HDR modes, there are even modes that cater to taking underwater landscapes, underwater action and the interestingly named underwater macro (not to be tried with a Great White).
For the more creatively inclined, Magic mode offers the usual raft of filters, such as Reflection, Pop Art, Pinhole, Fisheye, Soft Focus, Watercolour and the like; more important though was the 5 frames per second continuous shooting functionality, for when you want to capture being chased by a bear frame by frame and stopping to recompose isn’t exactly in your best interest.
Alas, there is not an aperture priority or shutter priority mode, although there are two custom function slots for saving preferred settings.
Likes and dislikes
To its credit, the camera does boast a very decent ISO range of 100 - 6400, and a couple of other notable outdoor-orientated features, such as an integrated GPS and a manometer, which displays atmospheric pressure, elevation or depth.
Most importantly though, is the image quality on offer. On that front, we were pleased with both the still and video images that the TG-delivered. At this point, we didn’t expect Olympus to mess up image quality though, so that was hardly a surprise.
To the point

As much as we like the plethora of creative modes on offer, we would still love to just have aperture priority and shutter priority at our fingertips for that more ‘serious photographer’ degree of control.

The question that the TG-1 ultimately poses is whether we would take it out for a hike, on an outdoor adventure or just generally when we suspected it may be subjected to its fair share of rough and tumble. Our answer? Without hesitation. It has a RRP of R5 000.