Imagine assembling all the best components into one dream gaming PC, and what you will end up with is Asus’ Republic of Gamers (ROG) Tytan CG8890.

Inside this beast of a gaming machine resides a six-core Intel Core i7-3960X running at 3.8 GHz that can be easily overclocked to 4.2 GHz when you press the Speed button at the front of the Tytan. It is coupled with Asus’ equally powerful GeForce GTX 690 GPU sporting 4 GB of dedicated RAM, with this powerful duo ensuring that we could play every game in our library, including Crysis 2 (review) and Far Cry 3, at maximum resolution and buttery smooth frame rates.

During benchmarking the Tytan proceeded to knock all our highest scores right out of the ballpark, starting with a jaw-dropping 4964 score within Heaven Benchmark 2.0 and 5962 via Futuremark’s 3DMark 2011 DX11 benchmark test. Within Passmark the Tytan delivered an equally impressive tally of 2744, followed by a CPU score of 9.77 points and 53.12 fps for the OpenGL graphics test within Cinebench 11.5.

Ensuring that you don’t overheat this PC is Asus’ capable gaming chassis that automatically opens its top and side panels in Turbo Gear mode, in order to exhaust hot air and redirect cool air into the system. Cooling during marathon gaming sessions is further assisted via advanced ten way venting and integrated liquid cooling.

Asus also included a myriad of useful software the likes of Asus Backup Wizard and GPU Tweak, which allows more tech-savvy users to boost their system- and GPU performance by tinkering with the settings. GPU Boost clock, voltage, memory clock as well as fan speed are all incorporated underneath here.

As expected, a plethora of connectivity options are also on offer, including four USB 3.0, a RJ45 port and six USB 2.0 slots at the back of the unit, plus another two USB 3.0 slots and a pair of USB 2.0 ports at the front.

You can also find a 16-in-1 memory card reader and DVD multi drive at the front of the Tytan. These are accessed by pushing down on the protective plastic front cover of the CG8890, which will cause it to automatically lift up and moves down to expose the connections housed below. 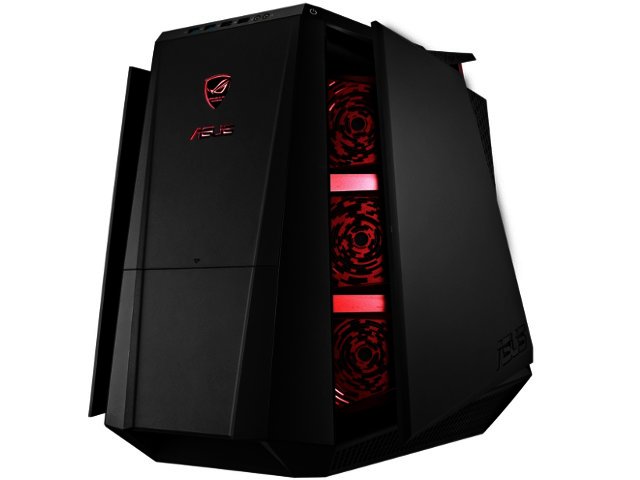 An eye-catching case, class-leading performance and exclusive pricetag all culminate in the ultimate PC gaming rig.

The only gripe we have with the machine is its massive size, making it virtually impossible to move by yourself. Furthermore, gamers who see themselves taking this gaming rig with the on the annual trek to the local gaming expo, rAge (Really Awesome Game Expo), will need to invest in a large enough trolley.

At 24 kg the weight of the Tytan is considerable, but its uncumbersome frame (300 x 530 x 630 mm) and unequally distributed weight means that you are going to have to plan where you want it and set it down, because once its down its there to stay. 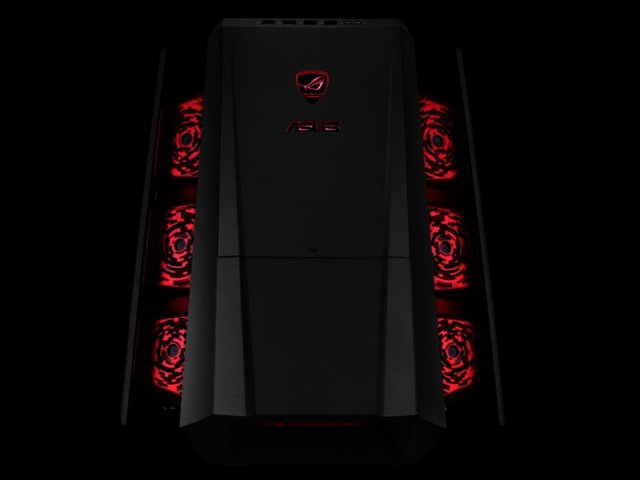 Asus’ ROG Tytan CG8890 gaming rig delivers a blistering gaming performance, and enables technically inclined gamers to customise all the settings of the PC. Unfortunately, it sports the bulk and equally sizeable pricetag to match this performance.

Pricing depends on the components you equip this gaming monster PC with, but for these specs users are looking at an estimated RRP of staggering R50 000. Buyers are able to tailor the specs to their needs and budget, which is great for people who require (or have the funds for) a fantastic gaming rig, but do not have the technical know how or the time to put one together.

Out of this world performance.
Top end specs all-round.
Plethora of storage space and connectivity ports.
Can customise any of the technical specs to your needs and budget.
Impressive case keeps PC cool and silent during operation.

Out of this world pricetag to match the performance.
Heavy.
Humongous and cumbersome frame.

PROS
Out of this world performance. Top end specs all-round. Plethora of storage space and connectivity ports. Can customise any of the technical specs to your needs and budget. Impressive case keeps PC cool and silent during operation.