Since the release of the iconic Gameboy back in 1989, Nintendo has been the undisputed king of the handheld gaming market. And now 22 years later that humble little machine has been revised and updated again and again, finally culminating in 2011's Nintendo 3DS.

We were given the opportunity to take the handheld for a metaphorical spin recently, finding it to be a highly worthy successor to the line. As we've covered in numerous articles, the Nintendo 3DS is a 3D-enabled handheld which works without the need for special glasses. 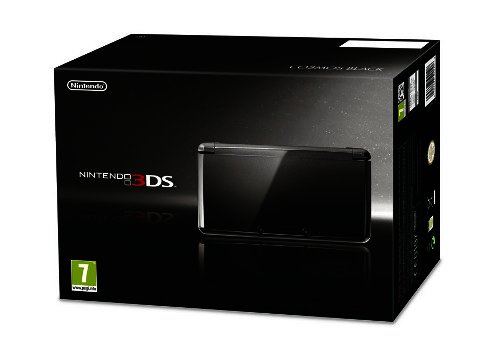 The 3DS sports the same clamshell design as the DS family, with dual screens, the top housing the 3.5” 3D display and the bottom the 3” touchscreen. Both screens displayed crisp and colourful images, with the 3D creating a pleasing effect throughout. Users can also control the intensity of the 3D effect with a slider on the device, so if you prefer gaming in 2D then so be it.

The upper display contains an array of 800 x 240 pixels, a high amount for a handheld, but in reality its effective resolution is 400 x 240 since thanks to 3D each eye has to view its own column of pixels. The bottom display has a resolution of 320 x 240, a substantial improvement from the DSi's 256 x 192 display.

To correctly perceive the lenticular 3D effect users have to position the 3DS in more or less a straight line from their eyes, with the effect disappearing when viewed from an angle. This isn't much of a problem though, as you're obviously going to have the device in front of you when playing, but it does eliminate over the shoulder spectating.

And while you may be tempted to keep the 3D dial cranked to the max, that may not always be the best idea. The slider can be set higher when your face is closer to the screen, as your eyes can easily re-assemble the two perspectives. But when trying to look at the 3D image from too far away with the slider set too high, your eyes have to work much harder to correctly perceive the 3D image, which may lead to headaches or discomfort. 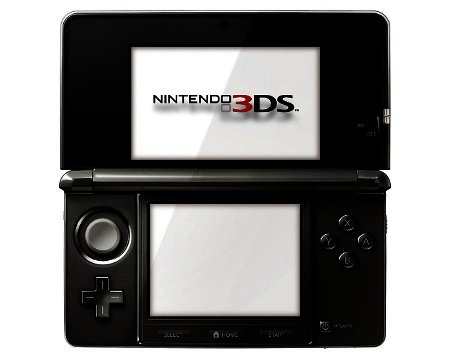 The 3DS might look relatively similar from the outside, but the device sees a major change once its flipped open, with a comfortable new analog thumb slider, or circle pad as Nintendo calls it, appearing above the traditional d-pad. The circle pad feels firm yet it has a decent amount of leeway, enabling gamers quick, accurate analog control for the first time.

On the right of the device the classic A,B,X,Y and a power button appears, while 'select', 'home' and 'start' options are located in a strip beneath the bottom display. Lastly, the left and right triggers are placed where you'd expect, also doubling as camera controls.

In general the 3DS also felt more sturdy than the DS Lite or DSi, with a solid design throughout. The lid also emits an audible click when it's snapped shut, enhancing the sense of quality even more. It’s also equipped with a telescoping stylus which is neatly stored next to the cartridge holder.

On that note, storage on the device is granted thanks to a 2 GB SD card, which should be more than enough room for most users, but if need be this can be easily upgraded. 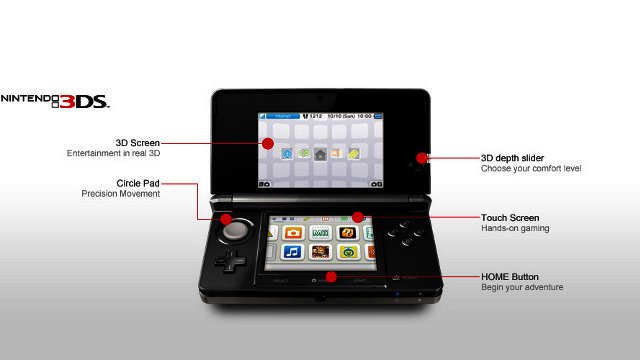 The triple array of cameras on the 3DS is capable of capturing 3D photographs and while the 3D photos are nice to look at, picture quality is unfortunately not of the highest calibre, appearing very grainy and pixelated.

Luckily though the cameras find a much more unique use in the realm of augmented reality. Every 3DS comes with six AR cards, enabling users to view 3D models of famous Nintendo characters and play mini-games simply by pointing the 3DS at one of the cards. The 3DS then superimposes images and animations onto the scene in question, enabling users to defeat a virtual dragon for example. These titles aren't going to occupy users for too long, but they demonstrate what is possible. We can already imagine navigating Solid Snake through a laser guarded maze which is actually our kitchen counter.

An accelerometer and gyroscope is also present on the 3DS, enabling a range of different gameplay options to be explored by developers. One such title, which comes pre-loaded onto every 3DS is Face Raiders, a game in which you can take a picture of your own or a friend's face, and have it layered over a flying... helicopter head-thing, there's really no easy way to explain. Now thanks to the magic of augmented reality the face will be superimposed over anything the camera sees, having the strange faces literally hanging in the air around you as you strive to shoot them down. A surprisingly enjoyable little title. 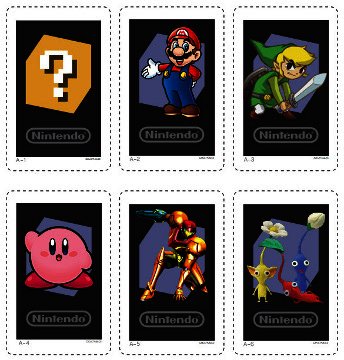 The 3DS also introduces the StreetPass and SpotPass features, allowing users to interact in new ways, even unknowingly. StreetPass is capable of exchanging game information with other 3DS systems as their owners pass each other throughout the day. Mii character data, maps, high scores and custom character data can be transferred in this way. SpotPass on the other hand connects the 3DS to compatible public hotspots or through a wireless connection, and will receive content and updates even when in Sleep Mode.

The 3DS also sports a web browser which in future will house the 3DS eShop, but unfortunately this is only scheduled to be added in a later update. According to Nintendo the company wanted to improve on the Wii and DSi's online shops, hence the delay. The functionality does sound very handy though, with users able to hop online while playing a game, check something on the web, and then hop back into the game, sort of like pressing Alt + Tab on a PC.

Unlike the DS the 3DS will support device specific friend codes instead of game specific codes, meaning you and a friend can simply exchange device codes and will then be able to play games together.

An activity log is also present, similar to the PokeWalker found with Pokemon Heartgold and SouldSilver. This functionality will reward users simply for walking around with their 3DS in their bag, with 100 steps equating to one play coin. These coins can then be exchanged for in-game items and additional features.

The Activity log, StreetPass and SpotPass features can all be utilised while the 3DS is in Sleep Mode. 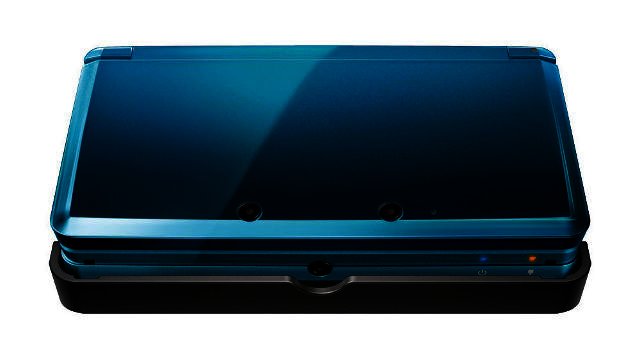 The battery life on the 3DS wasn't the most impressive we've seen, although still decent, with about 3 ½ hours of battery life reached while playing 3D titles, and just over 4 hours without. Users can also enter a power-saving mode to boost battery lifespan, and if you happen to be enjoying an older DS title on the machine you can expect around 6 hours of battery life (with WiFi disabled).

At the end of the day the Nintendo 3DS greatly impressed us with its sleek interface, beautiful 3D, augmented reality and a range of additional features. The 3D effect itself won’t have a major effect on most titles’ gameplay, but it truly adds to their graphical beauty. Games looked marvellous on the device, and given the fact that it’s backwards compatible with the Nintendo DS, it just makes sense for DS owners to upgrade, while Nintendo newcomers can jump into both worlds simultaneously.

The 3DS also sports a very promising games library, with launch titles including games such as Street Fighter IV 3D, PES 2011 3D, Ridge Racer 3D and many more. In addition to this, Resident Evil, Metal Gear Solid, Splinter Cell, Starfox 64 and Zelda titles are but a few of the exciting games slated for release in the coming months. Look forward to our first Nintendo 3DS game reviews which will be going online shortly.

The 3DS is available in either Cosmos Black or Aqua Blue and has a recommended retail price of R2977.

PROS
The immersive effect of switching on 3D for the first time, seeing depth appear on a handheld, has to be experienced to be enjoyed.

Samsung Galaxy S3 mini
Fitbit Versa
Hot New Trailers: Passengers
Cloud solutions need to be always-on
Fitbit Versa
Seamless communication is key to CX: Here is what it should look like
Snapping the chains that bind the business to legacy telephony limits