Last month we extended our iPhone 4’s battery life by employing SaFPWR’s (pronounced safe power) Fusion rechargeable smart battery case for the iPhone 4. Now we utilise the company’s Milano smart battery case for iPhone 4, whose wallet-esque looks provide it with a slightly more elegant feel than its Fusion counterpart. Does its bigger built-in battery equate to a longer extension of the iPhone 4’s battery life though?

The Milano smart battery case sports a different look to the Swiss Charger iPower for iPhone 4 as well as the SaFPWR Fusion rechargeable smart battery case for iPhone 4, both of which can be seen as extensions to the iPhone. This case totally encapsulates the iPhone when closed for protection and is very reminiscent of those cellphone cases that clips vertically onto a belt, except that there’s no clip on the Milano case.

The Milano does add a considerable amount of bulk to your device, and while still  grip and purse friendly, it certainly isn’t pocket-friendly. With case it’s more than twice as thick (2.05 cm) as the standard iPhone 4 (9.3 mm) and noticeably heavier too with almost 91 g up on the original 137 g.

You slide your iPhone 4 onto the back cover, which clips into your iPhone 4’s proprietary connector. This means that you have to make use of a mini USB cable to USB cord in order to charge your device or sync content via iTunes. Protecting the Retina Display of your iPhone 4 is a leather flap that is held in place by an easy to open magnetised closure. As is the case with the Fusion and iPower, there are holes in the cover for the camera and to access the 3.5 mm audio jack, camera and standby/ power off button. 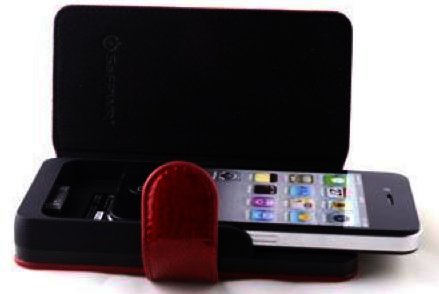 Power users and social networking junkies tend to leave the Wi-Fi connectivity on at work (and home if they have one), email, Facebook and Twitter apps, always on and running in the background. This normally results in your iPhone 4’s battery lasting about a day, if you’re lucky.

During our tests the iPhone’s own battery  lasted from 07:45 in the morning until 09:15 the following morning (with less than 10% battery power left), about 25½  hours. At this point we flipped the case’s power switch located at the bottom of the Milano, which then charged the iPhone 4’s battery back to full power (100%). From that moment (including the initial charging time), the battery lasted (8% power left) another 32 hours and 25 minutes.

This makes the grand total (SaFPWR’s built-in battery + the iPhone’s 4 own battery) a whopping 57 hours and 55 minutes, which is almost two and a half days and significantly longer than iPower and Fusion cases managed. It must be noted though that the testing was done over the weekend, so the time we spent connected to the office’s Wi-Fi network was notably less than testing periods for the either the iPower and SaFPWR’s Fusion. 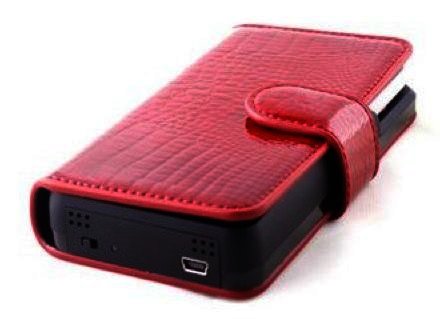 According to the company its not only the boost in battery life that a cover with a built-in battery provides, which is important but also the way in which it extends your battery life. The company states that a user loses between half a minute and a minute of battery capacity every time that their smartphone completes a charging cycle, equating to less performance over time.

It also says that its patented Energy Management Technology (EMT) will not only extend the run time of your iPhone, but additionally will protect your smartphone’s internal battery (by preventing short-ciruits and overcharging). This smart case will prolong the amount of charges it can go through and optimise the energy use of the iPhone’s battery. Whether this is true or not we don't really know, as the only real way to truly put this to the latter to the test is to utilise the case for its entire 500-cycles lifespan.

SaFPWR’s Milano smart battery case for iPhone 4 is a very stylish offering, even though it makes the iPhone a lot chubbier and far less pocket friendly. That said, from all the cases we’ve tested thus far, this one offers both the best protection and improvement on battery life, in most cases almost doubling it.
It is available for a recommended retail price of R699 from SaFPWR, which makes it more expensive than the iPower as well as the Fusion smart battery case. You can visit the company’s local website for more info or contact Jaryd Jardien on 083-602-1890 or  jaryd@safpwr.co.za.
Pro

Not the most affordable offering in its class and makes your iPhone 4 a great deal more bulky in terms of measurements and weight.

CONS
Not the most affordable offering in its class and makes your iPhone 4 a great deal more bulky in terms of measurements and weight.
TAGS:
iPhone 4 accessoryiPhone 4 protective coverSaFPWR
USER COMMENTS