Samsung’s A-series smartphones have some stiff competition in the midrange smartphone market, especially from the likes of Nokia, Huawei and other Chinese manufacturers. Although good, the A-series is expensive, which certainly comes into play when selecting amongst midrange options.

Enter the Samsung Galaxy A6+. It’s a big phone for a decent price, at least on contract with some of the cellular service providers. Here are few things to note about this midrange contender.

6-inches is nothing to be frowned upon, especially when it’s a super-AMOLED Infinity one coming in with a screen resolution of 1080 x 2094 pixels (420 dpi). With solid colour saturation, a screen that doesn’t show up smudges that easily and 18.5:9 ratio it’s one of the best you’ll currently find on any midrange device. 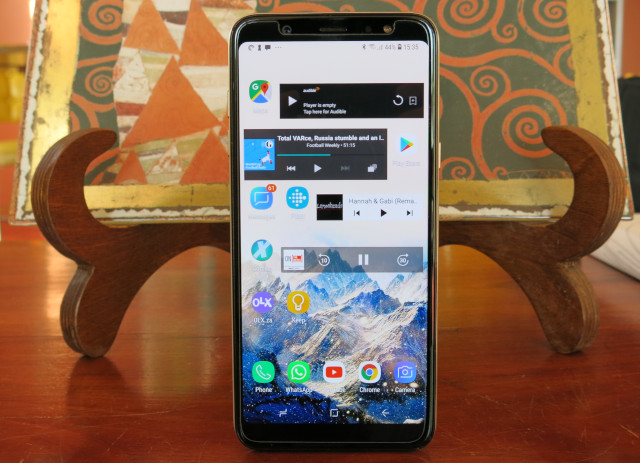 That said, it’s not an edge-to-edge display as seen on the high-end devices, nor does it feature the un/popular screen notch. And even with the 18.5:9 screen ratio, it did not have the same slim-fit feel in hand as many of the newer high-end phones have. Samsung did throw in the Always-On feature with the time and notifications displaying on the screen when locked – a handy feature to have.

Build quality is solid all around, with an aluminium body lifting the A6+ out of midrange dreck. On the side you’ll find the main Nano SIM slot, with an extra slot down the side for another SIM as well as a microSD card. That comes in useful if the 32 GB onboard storage doesn’t support your movie watching or downloading habits.

Two of the features often seen on higher end phones are dual-cameras and a background blur effect. The A6+ has both, with the dual camera boasting  a 16MP (f1.7) and 5MP (f1.9) sensors on the back. Most people like photos with a shallow depth of field, allowing portraits to pop thanks to background blur. The Samsung A6+ creates this with something they call Live Focus. Here you can select how much blur you want, and although not the default option when opening the camera, photos taken this way lead to surprisingly beautiful results.

Image quality was good, focusing was quick and there’s also Pro mode if you want to dig around and manually set settings. Samsung does add Snapchat like filters which they call Stickers, but at my age it’s not exactly something I used often. Talking of something not used often, the A6+ offers a massive 24 MP (f1.9) for the front facing camera, plus three different types of LED lighting to help to get the perfect selfie. Whether 24MP is overkill can be debated but nonetheless if you like selfies the A6+ delivers. 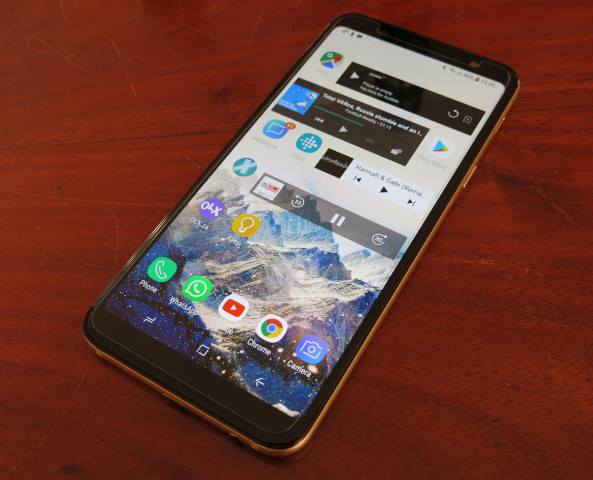 Not found on the A6+ is USB-C, which means all your old cables will still be able to charge the phone, while a 3.5mm jack (luckily) still features, meaning your headphones don’t need to be Bluetooth enabled. At the back, much like the S9, is a fingerprint scanner. . While it’s quick to unlock, on more than one occasion the sensor stopped working, which meant going back to unlocking it using the old fashion ways.

Suffering on the bench

If you’re one for benchmarking, look away now, since despite all the plusses, the A6+ doesn’t score well on Antutu. Onboard is the octa-core Qualcomm Snapdragon 450 chipset (1.8 GHz), which gives a pretty average score of 64 999, below that of the Sony Xperia XA2 Ultra (88 453) and basically on par with the Motorola Moto Z2 Play (68 507).

As always, benchmarking does not always reflect daily performance, but where I picked up a sense of slowness was when wanting to share images or articles. It just took that split second too long for the sharing options to pop up. Part of the concern with the processor (and RAM) is that, although the device is still performing well now, the processor will not be enough to drag it across the finish line before contract renewal. The 3 GB of RAM is basically the same as found on other midrange offerings. 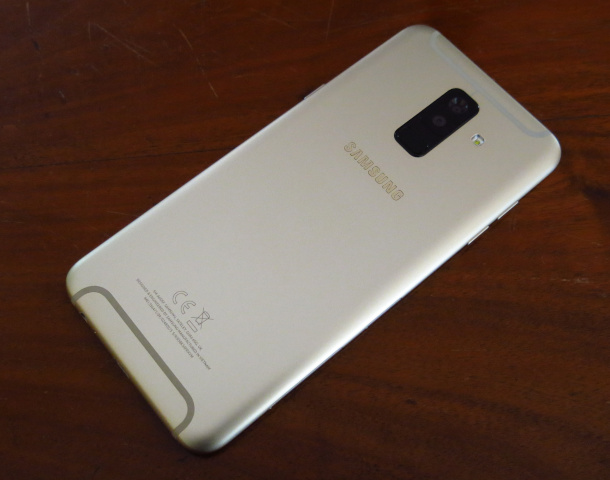 Onboard sound is great

Although I didn’t play any high-end games, I did watch a lot of YouTube, which the onboard speakers handled with aplomb. You can easily have this device in your pocket at home while still listening to podcasts, thanks to the solid speaker on the right side of the device. If you are using headphones you are in for a treat, thanks to the Dolby Atmos functionality that can be activated for movies or music. As much as I didn’t want to think it would make a difference, it really did, adding a layer of sound that wasn’t there under normal circumstances.

Samsung’s Bixby AI also features, but can be ignored for the most part. You would need a Samsung account to make use of Bixby, but the Google Assistant is onboard, so there’s not much need to sign up. I’m not a fan of most of Samsung’s apps and services, and luckily these can be safely ignored, providing a pretty clean Android 8.0 experience.

Perhaps just a word too on the 3500 mAh battery. That’s enough juice to take me through the day, surprising since it’s quite a large screen to support. If you are a heavy YouTube watcher, be prepared though to get a battery pack, since the A6+ isn’t a miracle worker. 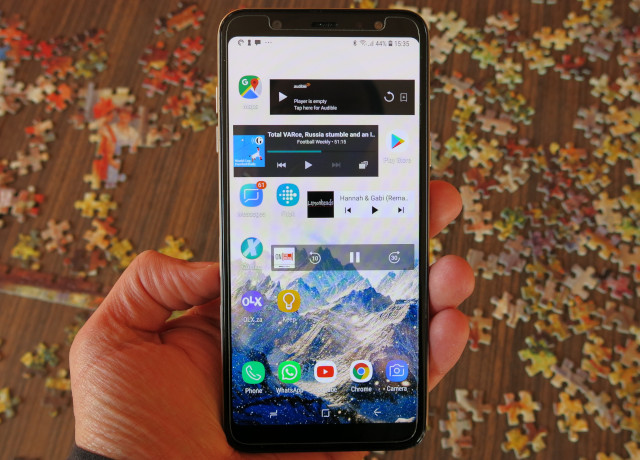 Apart from a middling processor, there’s very little that’s not appealing on the Samsung Galaxy A6+. Great cameras, decent battery life, an awesome screen and an aluminium body makes this one of the standout midrange models currently available. Notable is that at the time of publishing a number of cellular providers are offering really decent packages on the A6+. With this phone, at a decent price (R6 500), the Samsung Galaxy A6+ is the midrange phone to get.