Chrysler South Africa has unveiled its 2014 Grand Cherokee SUV range, with which the company hopes to ascend to the top of local buyers offroader acquisition list. The range will be locally available during August, and will come in three flavours namely Limited, Overland, and SRT8.

Styling changes at the rear of the car includes new larger tail lights with LED lighting, a bigger and more aerodynamic rear spoiler, new bumpers as well as a re-sculpted tailgate that offers greater rear visibility for the driver. Dual exhaust tips are now also standard on both the Limited and Overland models.

Under the hood of the Jeep Grand Cherokee Limited resides a 3.6-litre Pentastar V6 engine that delivers 210 kW at 6350 RPM and 347 Nm of torque at 4300 RPM. Combined-cycle (town and highway driving) fuel usage for this engine is a claimed 10.4 litres per 100 km.

Buyers of the Overland model can also opt for this 3.6-litre Pentastar V6 engine or rather get the massive 5.7-litre Multi-displacement System (MDS) V8 engine. This V8 engine delivers 259 kW at 5200 RPM and 520 Nm of torque at 4200 RPM. Drivers will visit the fuel pump station more often courtesy of a 13 litres per 100 km on the combined cycle.

The 5.7-litre powerplant does have a nice party trick in that the MDS is able to seamlessly alternate between smooth, efficient four-cylinder mode for fuel efficiency and full blown V8 mode for silencing boy racers in their OPCs, GTIs and STs. Another point worth mentioning is that the  2014 Jeep Grand Cherokee offers a trailer tow capability of up to 3 500 kg when employing the 5.7-litre V8 engine.

The top beast on the engine totem pole though is the 6.4 litre HEMI V8 that powers the 2014 Jeep Grand Cherokee SRT. As with the MDS 5.7 litre V8, this engine boasts a fuel saver four-cylinder mode for cruising cramped city streets as well as a V8 mode for racing Audi RS 5s and co from robot to robot. 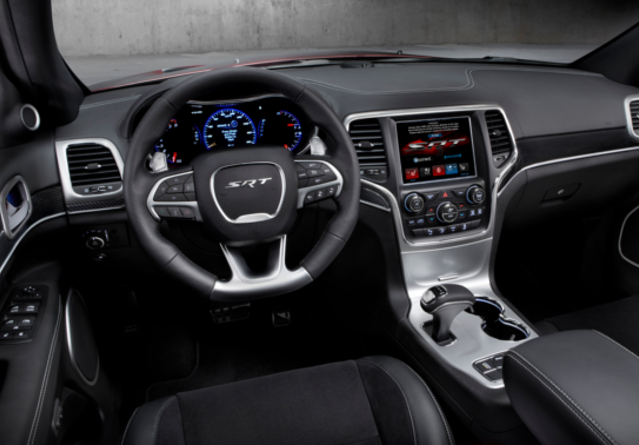 Just because you are able to go bundu-bashing does not mean you want to be devoid of all the usual creature comforts now does it.

Jeep Grand Cherokee SRT sports standard Quadra-Trac active on-demand four-wheel-drive transfer case, with this 4x4 system using input from a variety of sensors in order to determine tyre slippage and then take the corrective action required. When tyre slippage is detected, the system can transfer up to 100% of the available torque to one rear wheel with better grip.

The 2014 Jeep Grand Cherokee Overland model is fitted with Quadra-Drive II four-wheel drive system, which sports a rear electronic limited-slip differential. The core of the Quadra-Drive II system is the central transfer case and an electronically controlled clutch pack for active torque distribution. On dry pavement and in normal tractive conditions, the central transfer case splits 48% of the available torque on the front axle and 52% on the rear one.

Whilst navigating slippery surfaces, the system automatically redirects engine torque between the front and rear axles based upon real-time driving conditions. This provides the vehicle with responsive tractive performance, avoids loss of grip in case of sudden acceleration, and includes the 4WD High and 4WD Low ranges.

The 2014 Jeep Grand Cherokee Limited drives all four wheels via the tried-and-tested Quadra-Trac II system. This boasts a high and low-range transfer case, and employs the antilock braking (ABS) sensors to control traction. 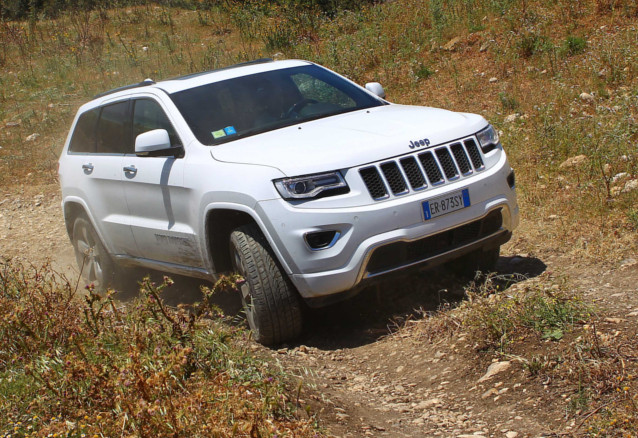 The trail rated Jeep Grand Cherokee is easily able to venture off the beaten track.

Diesel fans will also get behind the wheel of the new 2014 Jeep Grand Cherokee when the 3-litre CRD versions is launched later this year, with Jeep stating that pricing info for that model will be announced closer to date of launch.

In other motoring related news, Nissan recently expanded the local Juke range to seven models, courtesy of the introduction of the new Juke 1.5 dCi Acenta+.