After months of expectation, rumour, and speculation about its specifications, Canon has officially unveiled its newest addition to its APS-C EOS cameras, with the EOS 70D.

The camera, which is the successor to the 60D, borrows a feature or two from its predecessor, such as a vari-angle screen, and similarly offers the onboard wireless found on the full frame EOS 6D (comparison review). However, more notably, it boasts several of its own distinguishing features as well.

This should also enable it to hold its own in lower light conditions, or at least give owners of slower (f5.6) lenses a little more room to breathe when the sun starts to fade.

The camera further features a 19-point all cross-type AF System. This is customisable, enabling photographers to use AF points individually (useful when aiming at small birds surrounded by branches), in small groups (for larger subjects) or across a wider area to take into account fast moving subjects.

Much like on the EOS 7D or EOS 5D Mark III (review), this camera also has a dedicated AF area selection button, positioned next to the shutter release, enables quick switching between AF modes, without having to take the camera away from the eye.

Further arguing for its place in enthusiast photographer’s camera bag, the 70D boasts Canon’s DIGIC 5+ processor and is able to shoot at up to a healthy seven frames per second, which should make for speedy operation and no less fast image capture respectively. 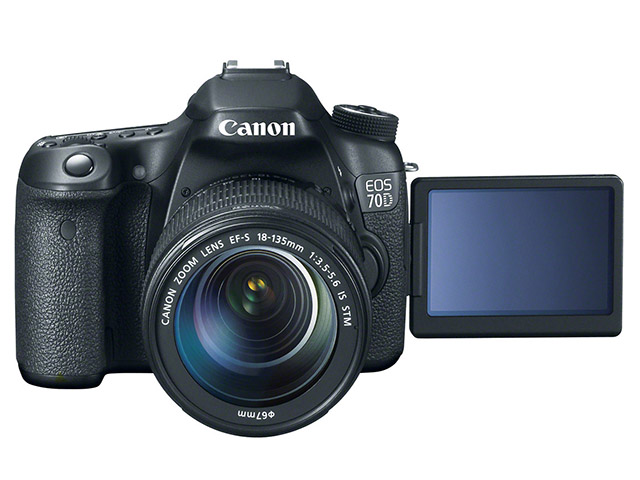 Like the EOS 60D before it, the 70D similarly offers a vari-angle screen, a boon to videographers shooting from awkward angles.

However, it is the video features of the new camera that seem particularly prominent. For example, the camera’s vari-angle Clear View LCD II 1 040k dot resolution touchscreen would be a nice to have on a still-orientated DSLR, but it is a boon on a video-friendly one. This effectively enables one to shoot video from a variety of awkward angles, while following the video capture on screen in its Live view.

Furthermore,  Canon elaborated that full HD (1920 x 1080p) resolution video can be captured with a choice of selectable frame rates, including 30, 25 or 24 fps, and 60 and 50 fps at 720p, and a range of compression options for post-editing and sharing.

Additionally, users can select different focus areas over 80% of the frame by tapping the touchscreen, even when recording, so as to ensure that movies stay sharp and clear if a subject moves or the user changes the composition of a shot.

For videographers, capturing moving images is only half of the task, the other part of the process involves recording decent audio. The 60D appears to take this into account, enabling videographers to capture stereo sound with the internal microphone, or alternatively avail themselves of an external microphone using the camera’s input terminal.

As befitting a camera that doesn’t need to be fully weather sealed, like its pro-level counterparts, the 70D has a pop-up flash which also works as a wireless commander, only accommodates SD/SDHC and SDXC cards (but not CF) in a single slot and weighs in at a relatively light 755 g.

According to an entry on his Facebook page, Roger Machin, Canon South Africa’s product manager of DSLR, calls the camera light, quick, nimble and very quiet. While he notes that it's definitely nowhere near as robust as the 7D, he added that it feels more impressive than the 60D - especially with the new BG-E14.

While local availability and pricing have not yet been announced, we expect this will be made known as we move closer to the camera’s launch Stateside at the end of next month. There, the camera will apparently dip into enthusiast photographers’ wallets and capture $1 200 (R12 000) at up to 1/8000th of a second.

While hopefully we will be able to go hands-on with Canon’s newest in the near future, the cameras build and feature set bodes well for those hoping to see another highly anticipated APS-C offering, in the form of the EOS 7D2.

Indeed, that camera, we would expect, would target an even more high-end enthusiast or professional market, and thus could boast a more ruggedized body. However, we wouldn’t be too surprised to see some of the features offered by the 70D to be incorporated when or if the 7D2 does materialise.