Dell Technologies Forum: Get ready for a new season of progress

Annually, July means two things - we get to come face to face with a winter and Dell Technologies holds its annual forum.

This year has been no exception on both fronts, with Dell once again offering up some illuminating keynotes, plenary sessions, and an exhibition space for a variety of technologies. Held at the Sandton Convention Centre last week, this year’s forum focused on medium businesses in particular, while naturally being applicable to small and larger organisations as well.

The value of these kinds of conferences, beyond the information shared, has increasingly become around the opportunity to network, to meet peers grappling with similar problems and to garner insight into solving them.

The event began with the Dell EMC South Africa GM, Doug Woolley emphasizing the company’s focus on social good, while making an impassioned plea to other companies to get involved in driving social change forward in the country. Then, Dell Technologies’ marketing director for Middle East, Turkey and Africa, Haidi Nossair unpacked how the company has approached its social responsibility towards the environment, which you can hear more about in the videos below.

Beyond that call to action, the VP & Global CTO for Sales at Dell Technologies, Patricia Florissi, expanded upon how the world is changing because of technology. Perhaps most heartening from her keynote address is the assertion that it’s South Africa, along with her homeland Brazil, that are poised to take advantage of the potentials that emerging technologies offer.

“I’m inspired by South Africa. It’s the dawn of a new era where technology will help create a new future,” she enthused.

Florissi elaborated on a few examples of how technology can be used to that end, with the ability to launch satellites more frequently and cheaply having now vastly improved our knowledge of environments, especially when we start analyzing the data through AI to extract actions.

Tech in the real world

As to some pertinent examples, she cited a couple. The first of these is that with satellite imagery and computer vision, the potential of certain crops become more apparent, and visible. A more commercial example of technology in action is the use of photos from retail parking lots, which can help accurately predict the turnover of outlet malls and can prompt stores to launch promotions for the day to push sales.

Florissi continued that the world has taken big strides in the past 65 years, vastly improving lifespans and infant mortality, as well as literacy. But the full force of the digital era is only starting to become apparent. Returning to the crops example, Florissi noted that it’s not just about delivering the best yields, but also addressing production loss and distribution waste.

“We generate enough food to feed everyone, but efficiencies fall short. The insights from digital technologies can change that dramatically and can equally reduce the high demand on natural resources like water and energy,” she continued. 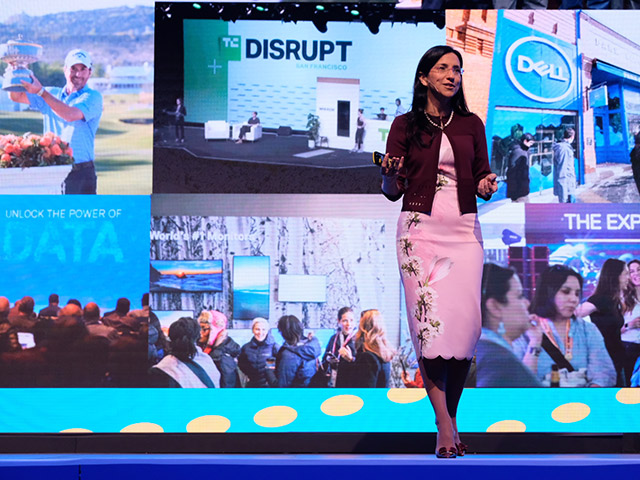 The time is now

Clearly the real world benefits are valuable, and an argument can be made that we deeply need AI infused technologies to address pressing problems, like the impact of climate change. The question arises though, why now? After all, this is not the first time we have heard about AI, with the likes of John W. Tukey anticipating the role artificial intelligence would play more than 70 years ago? So why has it taken so long, and why hasn’t progress been faster?

Florissi addressed this question, noting that the world went through several AI winters – much like we are currently grappling with close to home. “There were periods of no progress because we didn’t have the right technology forces,” she explained.

However, this is what makes our current era so significant, she elaborated.. Florissi pointed out a number of such forces that are currently fueling innovation and change, including AI, the Internet of Things, augmented reality, edge computing and 5G. Central to all of these is data or, as Florissi calls  it, “the centre of the digital universe.”

“Data is the sun. It’s the fuel. But unlike other fuel sources, it’s inexhaustible,” she enthused.

Florissi elaborated that the combination of all these forces is creating a technology continuum. “We no longer have data centres, but centres of data. Being able to understand and learn to live in the digital universe is what will unlock value for businesses and progress for societies,” she continued. Naturally, Dell Technologies wants to be a partner in that journey for every type and size of organisation, because this influences everyone.

“Regardless if you are a two trillion dollar powerhouse or a two-storey farmhouse, we want to help you evolve,” she stressed.

The main takeaway from this year’s Dell Forum is that the availability of technology, the need for innovative solutions to address social and environmental challenges, and a rapidly changing world are all aligned. The only piece that needs to bring these components together to improve the world is us, whether as individuals or businesses.

Fitbit Versa
Is cybersecurity now as important as health and safety?
Seamless communication is key to CX: Here is what it should look like

DeskStand Jumbo
Fitbit Versa
Is cybersecurity now as important as health and safety?
Seamless communication is key to CX: Here is what it should look like