HTC has doubled the amount of smartphones local buyers can opt for, courtesy of the launch of the One mini. The smartphone is already available from Cell C with select Vodacom retail stores also offering the device as of today for a recommended retail price of R5 500 (including VAT).

This mini-me version of the One (review) has a design leg up on Samsung’s Galaxy S4 mini (review), seeing that it packs the same premium all aluminium design as its bigger brother.

Another design win for this device that is quickly shaping up to be our new midrange favourite is the fact that it packs a 4.3" (720 x 1280; 342 ppi pixel density) Super LCD2 capacitive touchscreen protected by Corning Gorilla Glass 3. This trumps the qHD (540 x 960) resolution available on the 4.3" Super AMOLED display of the Galaxy S4 Mini.

The eye-catching visuals from the display is backed up by some excellent sound via HTC’s BoomSound experience with dual front-facing stereo speakers delivering a higher quality, louder sound. Unlike on the company’s new One max phablet that is not making its way to South Africa, Beats Audio enhancement also makes an appearance for a noticeable sound boost whilst listening to music via a headset.

Powering the Android 4.2.2 (Jelly Bean) operating smartphone is Qualcomm’s dual-core Snapdragon 400 CPU running at 1.4 GHz, which is coupled with 1 GB of RAM. We suspect that the S4 Mini may have the edge when it comes to benchmarking performance though, seeing that its Snapdragon 400 processor is clocked higher at 1.7 GHz plus it sports 1.5 GB of RAM. 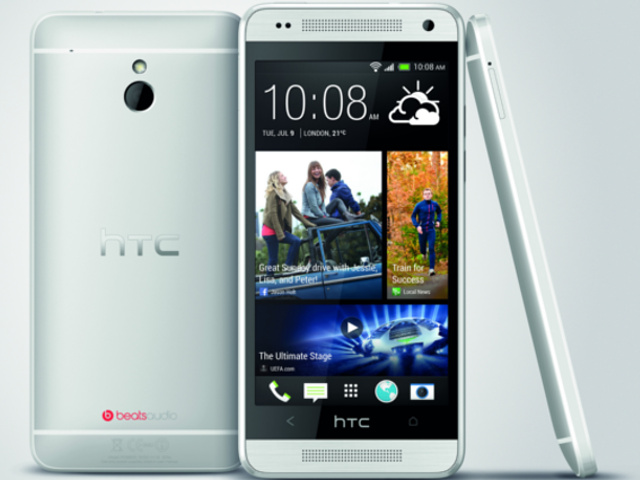 Optics and other features

In terms of optics, users get the same ‘Ultrapixel’ 4 MP rear-facing camera at the back as found on the One, and this is backed up by a 1.6 MP front-facing snapper which takes surprising good and detailed selfies.

Also onboard is a non-removable 1800 mAh battery, aGPS support with GLONASS, dual-band  Wi-Fi 802.11 n, Bluetooth v4.0, and 16 GB worth of internal storage that unfortunately (like in the case of the One) is not expandable.

Our first impression of the One mini is that it is boasts a premium feel in hand, and offers more feature bang for less bucks (R5 500 vs R5 700) compared to its main rival - the Galaxy S4 Mini. HTC is only offering the silver and white version of the One mini locally, with local buyers also only being able to opt for the 16 GB version of this smartphone.

According to Peter Blantanis, head of sales and marketing for HTC South Africa, buyers can expect to update their device from Android 4.2.2 to Android 4.3 in Q1 2014, with an update to Android 4.4 KitKat also in the pipeline. The One mini will be offered locally up until the end of next year, whilst South African smartphone buyers will still be able to pick up an HTC One until Q1 2014, at which time this smartphone’s successor is expected to be revealed.

In related news, catch up with all the latest smartphone headlines in our latest Phone Home mobile news round-up.