According to IDC, this is the first time Android has surpassed the 80% mark, running on the clear majority of the 211.6 million smartphones shipped in Q3. In spite of relatively high smartphone saturation rates within a lot of developed markets, the smartphone market increased by 39.9% overall year-over-year.

On the whole though Android’s shipment successes are coming from the top 5 OEMs (original equipment manufacturers), whilst the vast majority of Google’s hardware partners are still struggling to find meaningful market share.

By itself, Samsung accounted for 39.9% of all Android shipments for the quarter, with the rest of the OEMs either lay claim to single-digit market share or in most cases possess a market stake of less than 1%.

Apple has seen its smartphone shipment volumes increase to a new record Q3, thanks to the availability of two rather than the usual one new iPhone model. Despite this though Cupertino saw its market share decline.

Looking ahead, IDC stated that the 9 million iPhones sold during the last week of September likely points to yet another record quarter in terms of smartphone volumes, market share, as well as year-on-year growth for Apple in Q4 2013.

The battle for 3rd spot: Windows Phone vs BlackBerry

According to IDC Microsoft’s Windows Phone managed to snag the biggest year-on-year growth worldwide of any of the leading mobile OSs, with the data analytics firm attributing the platform’s successes to Nokia. This, as the Finnish phone giant alone accounted for 93.2% of all the Windows Phone-powered smartphones shipped during Q3 (3.7 million), marking a new milestone in the company's short history on the Microsoft platform.

In contrast to Windows Phone, BlackBerry recorded the largest year-on-year decline among the leading mobile platforms during the past quarter. IDC noted that even with a new CEO and $1 billion investment, it remains to be seen whether BlackBerry 10 is able to change the fortunes of the company in the face of ever-mounting pressure from Android, iOS, and even Windows Phone. 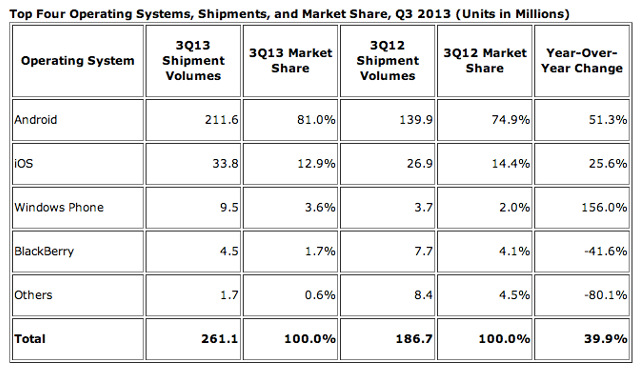 Ramon Llamas, research manager with IDC’s Mobile Phone team said that despite Android and Windows Phone’s differences in market share (81% vs 3.6%), both of these fast growing platforms share one important factor behind their success, namely price.

This, as both OSs sport a selection of devices available at prices that are affordable enough for the mass market, which is the engine for their respective growth rates during the course of the quarter (51.3% vs 156%).

Another common factor delivering a sales boost for OEMs was large screen form factors. Phablets (5.7" or bigger screen smartphones) proved to be popular with buyers and nearly all of the top 5 Android vendors offered at least one such a device as part of their lineup. Even Nokia got in on the act when it unveiled the Lumia 1520 and 1320 Windows Phone 8 operating phablets.

During Q3 2013, phablet shipments accounted for 21% of the smartphone market, representing a year-on-year increase of 3%. IDC actually went so far as to say that it is of the opinion that the lack of a bigger screen iPhone may have contributed towards Apple’s inability to grow its share during Q3 despite selling a record number of smartphones.

In other market related news, Gartner recently revealed that the worldwide combined shipments of devices (PCs, tablets and mobile phones) are now projected to reach 2.32 billion units during 2013.