The latest market research from data analytics company IDC (International Data Corporation) has revealed that worldwide PC shipments are now expected to decline by nearly 10% in 2013, further deepening what is already the longest market contraction on record.

According to the market research firm’s Worldwide Quarterly PC Tracker service, its new forecast takes into account the rapid expansion of mobile device shipments at the expense of PC sales. In addition, the adjusted outlook also calls attention to the decline of the emerging PC market growth, which the PC industry as a whole had come to rely upon in recent years.

IDC stated that the overall PC market is anticipated to contract through at least 2014, with only single-digit modest growth forecasted as of 2015 onwards, never again destined for the Everest-like shipment volume peaks of 2011.

“The days where one can assume tablet disruptions are purely a First World problem are over,” said Jay Chou, senior research analyst, Worldwide Quarterly PC Trackers at IDC. “Advances in PC hardware, such as improvements in the power efficiency of x86 processors remain encouraging, and Windows 8.1 is also expected to address a number of well-documented concerns.”

“However, the current PC usage experience falls short of meeting changing usage patterns that are spreading through all regions, especially as tablet price and performance become ever more attractive,” Chou added.

According to IDC, 2013 marks the first year where emerging regions such as MEA (Middle East and Africa) are expected to contract at a faster rate compared to mature regions.

Leading this trend is China’s revised forecast, which calls for a double-digit decline in shipments this year when compared to 2012. This decline can be attributed to channel sources reporting high levels of stagnant inventory as well as the continued sales boom of tablets and smartphones.

The repercussions of a slowing China, anxiety over the possible tapering of the US PC shipments, and the weak intrinsic PC demand are among the long list of factors that have contributed to the leading emerging markets as a whole being forecast to experience shipment declines through until at least 2014. 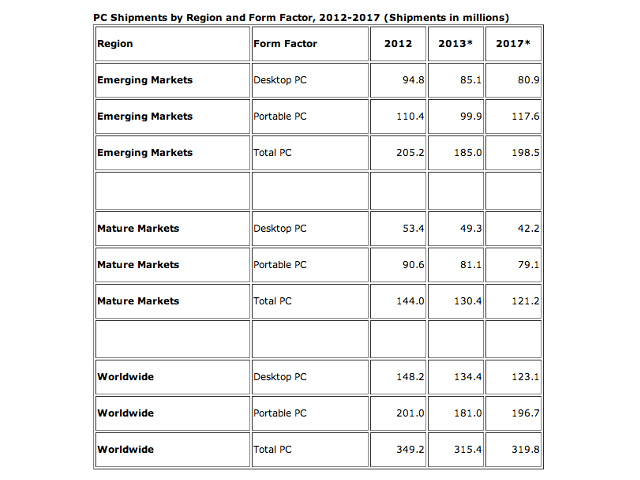 Beyond 2014, IDC expects a slow rebound for the global PC market, driven partly by modest consumer refresh of systems, and companies around the world making their first serious investments in Windows 8/8.1 systems.

“The second quarter of 2013 was the third consecutive quarter where the US market came through stronger than the worldwide market. This was largely due to some recovery in the overall economy and channel inventory replenishment,” said Rajani Singh, research analyst, Client Computing.

“Following the stronger than expected Q2 2013, we expect the second half of 2013 to restore some volume momentum driven largely by better channel involvement of top vendors and industry restructuring/alignment. We also anticipate operating system migration (Window XP to 7) will drive some volume in the commercial segment. Entry-level ultraslim systems and lower-priced convertibles will also be bright spots in an otherwise still troubled consumer market,” Singh concluded.