LG opted for a display that is curved from top to bottom as opposed to left to right like Samsung. This means that the G Flex’s screen curves in the same manner as the company’s HDTVs with curved displays, when a user puts the smartphone on its side while viewing a movie for instance.

Software features making the most of the curved display

Like Samsung, the Korean company opted to make a number of software (user interface) enhancements to capitalise on the added screen real estate and curved display. These include QTheater, which provides users with quick access to photos, videos and YouTube right from the lock screen. This is done simply by touching the screen and dragging outward along the curved surface using both fingers.

Other improvements are Dual Window that divides the wide 6" screen into two separate windows for more effective multitasking and Swing Lockscreen. The latter alters the image on the lockscreen depending on how a user holds their G Flex smartphone. 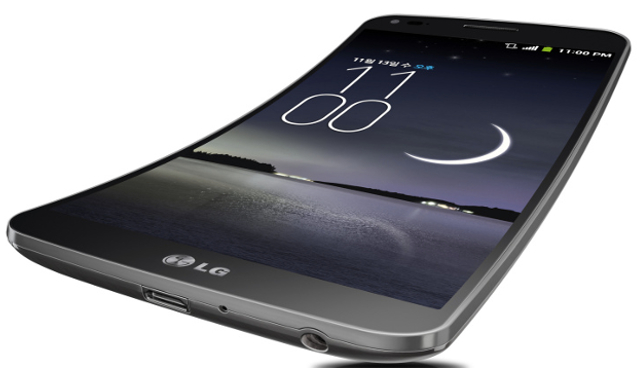 Like Samsung, LG has decided to bend smartphone display convention by unveiling its first device with a curved display in the G Flex.

Another novelty makes its debut on the G Flex

Besides boasting a curved touchscreen, another feature setting the G Flex apart is its back cover. This is not because its buttons (power button and volume rocker) are placed at the back (though these are), but because the back cover packs a “Self Healing” coating according to LG.

The firm said that this elastic coating enables the devices to recover from daily wear-and-tear scratches and nicks that a smartphone without a protective case is likely to receive, helping the G Flex look newer for longer. We are really curious to see how this coating will be able to repair minor scratches “in minutes” just like snail is able to fix chips on its shell for example.

Beyond the curvy nature of the touchscreen, the specsheet of the G Flex is pretty similar to that of the G2. Under the hood resides a 2.26 GHz quad-core Qualcomm Snapdragon 800 processor that is coupled with 2 GB worth of LP DDR3 RAM. In terms of optics, users get a 13 MP main camera and 2.1 megapixel selfie snapper, with 32 GB internal memory to store photos, videos, and other multimedia content on.

LG stated that the G Flex will be available in its home turf of South Korea as of November, with availability in other markets to be announced soon thereafter. No local release info is available yet.

What do you think of smartphones with curved displays? Is it something you want to see become a more mainstream thing such as phablets or do you think it will go the way of the Dodo and 3D screens on smartphones? Let us know by posting a comment below.

In related news, LG recently launched its new flagship smartphone - the G2 - in South Africa. The Korean firm is making the smartphone locally available on 1 November.