LG's new Rolly foldable keyboard can fit in your pocket

LG's new Rolly foldable keyboard is not just a fun-looking accessory, it's a QWERTY on a mission. Designed to "capture a larger share of the fast-growing mobile accessories market," LG clearly has big plans for this small keyboard. Set to be officially unveiled at IFA 2015, along with the G Pad II 10.1, the Rolly is certainly unlike any foldable keyboard we've seen in quite some time.

The keyboard itself folds along four separate rows, locking together to transform into a stick. While LG says it's a slim and sleek accessory, the press release accompanying it does not detail its actual dimensions. Instead, the South Korean manufacturer details the quality of its keys. They say that "typing on Rolly Keyboard is extremely comfortable because its 17 mm key pitch is nearly as generous as the 18 mm key pitch found on most desktop keyboards." 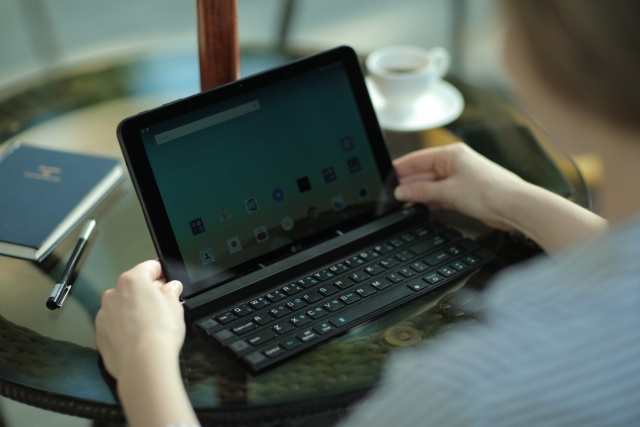 As far as other aspects of the Rolly keyboard goes, it is constructed from impact-resistant polycarbonate and ABS plastic. It can also connect to two Bluetooth 3.0 enabled devices simultaneously and utilises a single AAA battery that offers an estimated three months of use. In terms of device compatibility, LG says that it will work with any mobile device measuring up to 10" (diagonally).

LG will be rolling out the Rolly keyboard during Q4 2015 in select countries across the globe. For now pricing remains undisclosed, but LG is set to detail it at IFA 2015 from 4 September. Till then, click on the Rolly video below.