Microsoft’s Inspire news briefing offered a variety of new announcements pertaining to the digital workplace, collaboration and productivity. One of them was the announcement of a new, free app called Whiteboard.

Judging by yesterday’s demo, the app is very clearly focused on enabling collaboration, giving users an infinite, and freeform canvas for sketching out their ideas using a pen, and making comments on the same whiteboard. As well, there is intelligence built in that can create geometrically correct shapes from rough drawings, as well as recognise when users are creating a table, and automatically offer up snap-to guides for columns and rows.

“Having a digital canvas for collaborating in real time across boundaries is particularly important especially as remote working is on the rise,” enthused Lori Wright, the GM for Microsoft 365 Teamwork.

The app is not entirely pen dependent though. As shown in the demo, it also responds to touch and keyboard input as well. Furthermore, users can also add text notes and images to the whiteboard, while the same whiteboard can be accessed from different devices irrespective of physical location.  Whiteboard sessions are saved automatically to Microsoft’s cloud, while enabling users to pick up where they left off.

The launch of the app dovetailed quite neatly into Microsoft’s recent modern workplace session, most particularly with regards to the modern workplace business group lead at Microsoft South Africa, Karin Jones’ point about the new culture of work that is emerging.

This, in part, is defined by harnessing employees’ ingenuity, and the sharing of expertise beyond boundaries, both of which the Whiteboard app appears to directly enable.

The app – which requires Windows 10 - can be downloaded  for free from the Microsoft Store. The company has stated that iOS and web based versions of the app will be made available “very soon.” 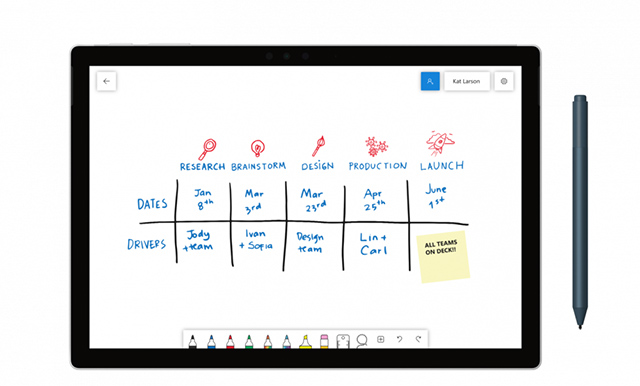