Multiplayer Beta for Gears of War 4 to begin 18 April

With the exception of Halo 5: Guardians, Gears of War 4 was easily Microsoft's biggest announcement from its 2015 Xbox E3 event. The game is slated for release this year, but an exact date remains elusive. It should come as good news then, that a closed and open multiplayer beta are scheduled for April, giving fans of the Xbox-exclusive series a taste of what's to come. 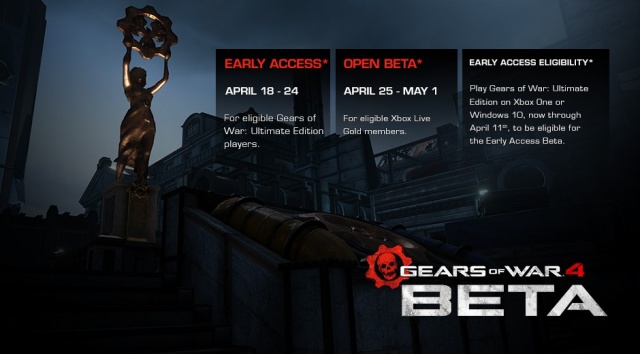 Microsoft confirmed the multiplayer beta news via its Xbox newswire recently, with gamers who purchased the Gears of War: Ultimate Edition given early access from 18 April. The multiplayer beta will then be open to all Xbox Live Gold members from 25 April onwards, with it closing down in its entirety come 1 May.

If you fall into either camps in terms of eligibility, it may be worthwhile giving the E3 gameplay another view.