Samsung is not the only one choosing the end of February to announce its latest flagship product – Nikon has now too also unveiled its latest pinnacle DSLR – the D4S.

The latest FX-format (full-frame) DSLR is firmly focused at catering to professionals, with a body size, a raft of features, along with a premium price, that likely only those who do photography for a living could justify contemplating.

To start with, there is a focusing system intended to meet the most demanding photographer. Nikon has asserted that the autofocus onboard the D4S is “initiated faster and is better able to acquire and track the intended subject, whether it enters the frame suddenly or takes up the entire frame for a more powerful composition.”

Furthermore, the autofocus (AF) system offers five different AF modes, four of which may be  familiar to Nikon shooters. These include single-point AF, dynamic-area AF, 3D-tracking, and Auto-area AF. Additionally, the fifth mode, Group-area AF, relies on a cluster of four different points in a cross formation around a user-selected fifth focusing point.

Also onboard is Nikon’s new EXPEED 4 image-processing engine, a new Nikon FX-format CMOS image sensor, and an effective pixel count of 16.2-million pixels. With regards to ISO sensitivity, the D4S boasts quite a range, complementing the standard ISOs from 100 up to 25 600, with extended sensitivities, ranging from the equivalent of ISO 50 on the low end up to ISO 409 600 on the top end. 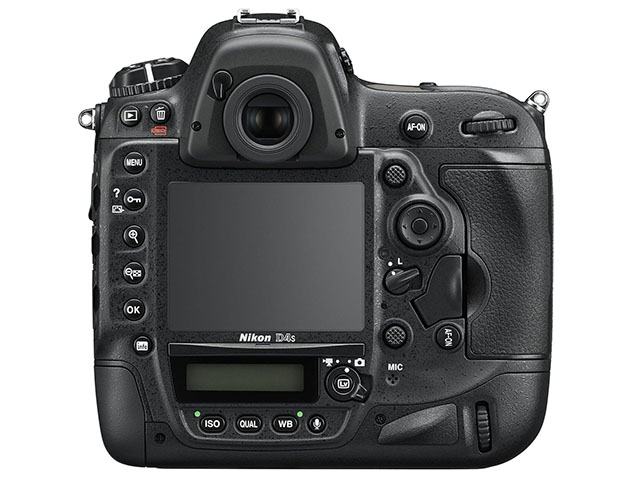 Nikon's newest pro level DSLR, the D4S, is a formidable looking camera with an array of pro-appealing features.

As for shooting speed, the D4S boasts a ‘don’t blink’ 11 fps; complemented by 51 focus points spread across the frame. All of these support a maximum aperture of f5.6, while 15 cross-type focus points at the centre of the frame use phase-detection AF to detect the subject horizontally and vertically. Meanwhile, photographers inclined to resort to teleconverters may be interested to hear that 11 focus points (9 running horizontally at the center of the frame and 1 each above and below) support maximum apertures of f8.

Still a video star too

Furthermore, uncompressed movies can be recorded directly to an external HDMI device connected to the camera's HDMI connector in movie live view mode, while, to its credit, a dedicated HDMI cable clip is supplied with the D4S (and not just an optional extra), which prevents accidental disconnection of the HDMI cable from the camera.

As impressive as its feature list is and as formidable as the camera looks, so too is its price daunting. Stateside at least, the camera will apparently command in the region of $6 500 (R71 500).