There’s some good news for TV lovers, as Skyworth recently revealed the debut of its Android TV and some of its plans for the South African market. If you haven’t heard of the brand before, you could be forgiven. However, the marketing manager for the company, Bridgette Meyer, reassured that they are well established globally, having been around since 1998 and ranking highly (number one) in China.

You may ask what’s the big deal about an Android based TV? The company answered that question, explaining that it brings a full Android interface and Google Play user experience to the living room.

The biggest difference between Android TV’s and other sets with their own operating system is that whereas other TV manufacturers build their set first and then add Wi-Fi, apps and an app store to their offering, Skyworth acquired Google’s operating system and based the TV around that, elaborated Jaco Joubert, key account manager at Skyworth.

This means that users will always have the latest apps on the TV as the update is released. Furthermore, they won’t be limited to what the TV manufacturer deems as worthy apps to include, but rather can download any supported app that is available on Google Play and experience it on a large screen.

The TV sports a quad core processor and graphics card, 4 GB of RAM and 16 GB of onboard storage. With a resolution of 3840 x 2160, you would expect picture quality to look terrific, and it does. Furthermore, it can pair with Bluetooth devices and has Chromecast built in, enabling users to cast media from their mobile device straight to the screen without needing to plug in a peripheral. 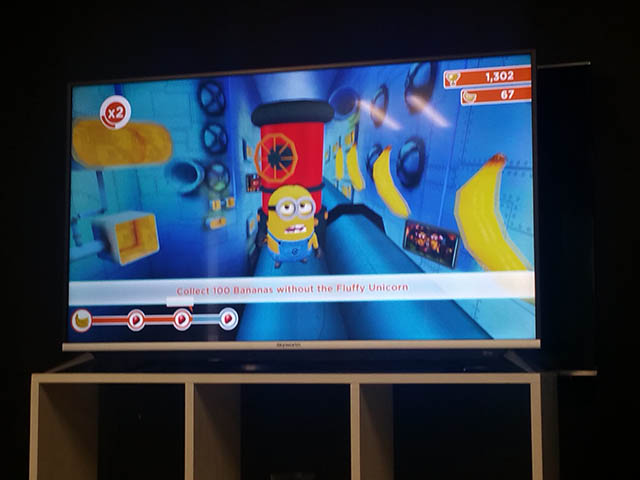 Beyond streaming Netflix and Showmax movies and YouTube videos, users can avail themselves of thousands of Android games without having to plug in a console. Joubert pointed out that regardless of whether or not you already have a PS4 or Xbox One, your gaming library suddenly becomes a lot bigger with an Android TV.

He pointed out that if there is an Achilles heel to gaming consoles, it is the high price of games, with the latest titles currently breaching the R1 000 mark. For parents in particular, this makes providing their children with a growing library an expensive exercise. However, Android titles come in at a fraction of the cost, with many family friendly options being free.

In fact, so much is gaming encouraged on the set that the units come with a proper controller included.

That, however, is not where the Skyworth’s differentiation stops. In a time when increasingly we are hearing about how artificial intelligence is being infused into more and more technology, so too has the Android TV received an AI infusion. For starters, Google Assistant enables one to talk to the TV in a variety of languages (86) and a good selection of possible accents. Using the remote as a microphone, users can voice their  request to see a list of all media on dinosaurs for example, or the latest sports game, and the TV will bring up the relevant results. As well, the more users interact with the AI, the more it learns about and adjusts to one’s preferences.

Furthermore, the TV set is intended to become the control centre of a smart home set up, from which connected light bulbs and smart appliances, like humidifiers or air conditioners, can be controlled.

From our brief time with the set, what we found particularly impressive was the sound. The audio from the integrated soundbar quickly filled the room when the volume was turned up, a far cry from the often lackluster speakers one finds built into a set. While you can, and may well want to, plug in an external sound system, based on what we saw, you really won’t need to in order to enjoy excellent sound out the box.

Apparently, the company further has considerable plans for the year ahead. The most encouraging news though is that the company is concentrating on offering a competitive price point, making it more affordable for consumers to buy a large, very good and full featured set without breaking the bank. For example, the price range of the sets start at R7 000 for a 49”, R9 000 for a 55” or if you really want to go big when you go home, 65” for R15 000. Not bad at all.

Hopefully we will be having some hands-on review time with Skyworth’s offerings in the month to come, so watch this space if a new TV is on your December shopping list.