Storm in a d-cup: the view of women in pop culture

It’s undeniable that pop culture has become mainstream culture as evidenced by Hollywood’s strip-mining of comics and electronic gaming. This is not to say that prevalent misogynist views have been eradicated. Instead the past few years have seen many festering issues bought to the fore. Comic book guru Moray Rhoda investigates.

One of the most obvious problems in pop culture is the hypothetical audience that female characters are created for. Laura Mulvey, a British feminist film theorist, introduced the concept of the male gaze as a symptom of gender power bias in her essay Visual Pleasure and Narrative Cinema, but it applies equally to fine art, comics and gaming. Male gaze is art that forces the viewer to regard the action and characters through the perspective of a heterosexual man where women are presented in a sexualised context.

The gaming industry especially excels at this with games like Tera Online where there is a stark contrast between male and female character creation and costuming. The worst offender in comics is DC’s Power Girl, an unrealistically proportioned character who has a ‘boob window’ as part of her costume.

One official explanation is that she intended to put a symbol in the space but could not settle on one, so instead cut a hole in her costume as a placeholder. Which obviously makes more sense than admitting she is some male artist/writer’s sexual wish-fulfilment material for teen boys.

The internet domain of the ‘serious gamer’ is a rank, smelly pit of teen angst where every discussion about consoles or pixels or HD re-releases quickly degenerates into flame-wars as attested by the amount of built-up bile and racism that is spewed every time another gamer has a differing opinion. In this perfect storm of name-calling, your-mama jokes and infantile behaviour, it’s still frightening to see the amount of hate so-called ‘fake’ woman gamers get.

It seldom or never happens that when a doctor states her medical opinion that she gets threatened with rape, but when movie, gaming and comic industry professionals do the same in their industry, it seems that these kinds of threats are seen as a valid expression of ‘nerd rage’. It’s the kind of sexist harassment that happened recently to comic pro Janelle Asselin when she commented on a DC Comics New Teen Titans cover (see below). Asselin called attention to Wonder Girl’s breasts, noting “Those are implants. On a teenaged superheroine.” This harassment happens on a regular basis to media critic Anita Sarkeesian whenever she posts a video in the series Tropes vs Women in Video Games (see video below). 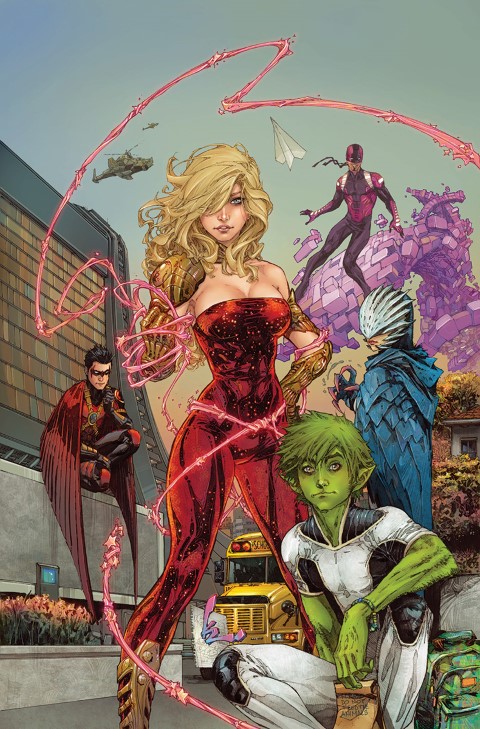 The New Teen Titans cover that cause the furore.

Threats of physical violence or sexually offensive comments seem to be the automatic fall-back position, and though one can argue that generally this is expected behaviour from males who are emotional (and sometimes physical) 12-year olds, it’s certainly not acceptable.

Get the girl, kill the baddies

In electronic gaming it seems that female characters mostly exist as victims; a narrative crutch for revenge themes for the main male character; or are generally marginalized and/or violently disposed of. Lara Croft is another unrealistically-proportioned, yet allegedly incredibly intelligent character, and the Tomb Raider reboot recently (deservedly) got some online flack after executive producer

Ron Rosenberg said: “When people play Lara, they don’t really project themselves into the character, they’re more like, ‘I want to protect her.’ There’s this sort of dynamic of, ‘I’m going to this adventure with her and trying to protect her.’”

This is the kind of thinking that is completely absent when creating a Nathan Drake character (from the hit-series of Uncharted PS3 games), who let’s face it, is really just Lara Croft in drag. It is the kind of thinking that seriously undermines the creation of good characters, who happen to be female. Which is how fictional characters should be created, as opposed to having their gender define them first.

Movies are no exception. As an industry, it sometimes comes across that Hollywood still believes that audiences don’t want to see strong female leads portraying well-written characters or that these actors won’t deliver the kind of box-office gold of their male counterparts. Of all the pop culture industries, this is probably the most disheartening, as female creatives are extremely well-represented in all spheres from screenwriting, to acting, to directing, to producing, and yet that has not translated into most movies passing the Bechdel test for strong female characters. Named after American cartoonist Alison Bechdel, it tests whether a movie contains:

3) about something other than a man.

It’s not much to ask for and yet most movies (including rom-coms) tend to fail this test.

It’s the end of the world as we know it

Changing current entrenched attitudes won’t be easy. The biggest stumbling block is the prevailing ‘us versus them’ mentality that seems to almost be a badge of honour for some geeks. ‘Them’ being anyone who did not grow up in a petri dish of geek culture or gained their power through years of being exposed to comics, TV, PC or console radiation.

Pop culture has become popular culture and for those who spent years as outsiders finding meaning in their lives in gaming, movies or comics, this has translated into the co-opting or outright stealing of their childhood obsessions. These ‘original fans’ have to realise that the new fans and women won’t go away and they are not the enemy, so sooner or later ‘they’ will need to become ‘us’.

On the other side of the argument, eradicating gender-biased art is treated as the be-all and end-all, mostly proving true current fanboy fears of outsiders destroying geek culture. However, the Feminazi approach of public warfare through social media with every real or imagined piece of male gaze art is counter-productive. A much more impactful way of dealing with the attitudes and perceptions in pop culture is to address the issue more creatively.

For instance, comic book creator Noelle Stevenson (http://gingerhaze.com/nimona) suggested a formula to draw attention to the hyper-sexualised and unrealistic way women are drawn in comics, namely: “How to fix every Strong Female Character pose in superhero comics: replace the character with Hawkeye doing the same thing.” This led to the creation of The Hawkeye Initiative which, thanks to the electronic age, swept the world and created some amusing art and more importantly, a serious dialogue around male gaze art. 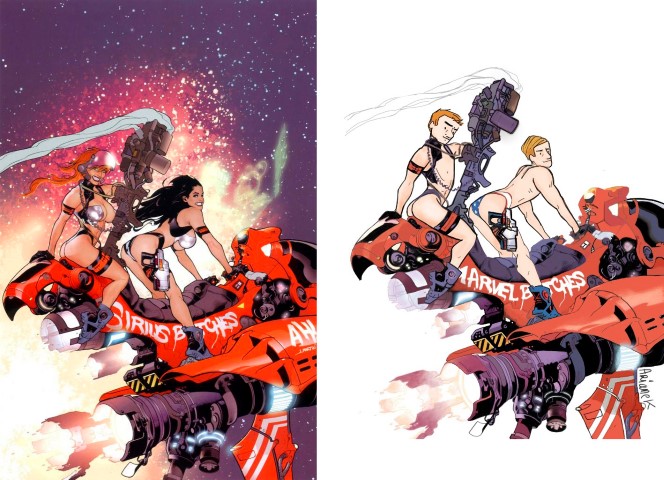 Question: What do you get when you make male heroes pose like female ones? Answer: The The Hawkeye Initiative.

Ultimately creators of popular culture should strive to be more informed and to stop perpetuating stereotypes when creating characters, just like fans of geek culture should realise that a differing opinion of their favourite thing doesn’t give one the right to make threats aimed at the critic. There’s simply no excuse for it.