WeChat reaches out to Africa

China’s immensely popular mobile social app, WeChat, which currently has amassed some 400 million users globally, is now intending to make further inroads into South Africa and Africa. Indeed, with 50 million of its users outside of China, and racking up some 100 million users in its first quarter, it’s not difficult to see why cellular obsessed South Africa is a viable market.

According to Brett Loubser, the managing director of WeChat South Africa, the app has enjoyed an already strong growth in the South African market, while its global exponential growth since its launch a short two years ago has proved its scalability. Furthermore, he explained that WeChat is backed by the 15 year old Hong Kong listed company, Tencent, which has a long history of building platforms and is supported by Naspers.

The app itself certainly has got quite a bit in its favour – it is free, and available across a number of platform that includes iOS, Android, Windows Mobile, BlackBerry v5 and up, with a v10 offering in the pipeline, as well as Symbian series 40 and 60.

While the app is available using one’s browser as well, via Web WeChat, to take advantage of connecting and chatting with one’s contacts from a PC, Loubser confessed that he didn’t know whether SmartTV’s with their own app ecosystem would receive the similar treatment. He did affirm however, that he was certain WeChat would make its way to “whatever platform makes sense.” 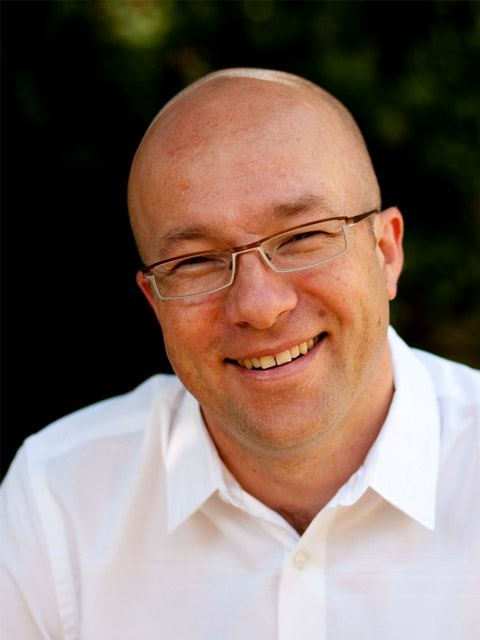 Further differentiating the app is its approach to privacy. Indeed, as some social networks, and their users, appear to treat privacy like a teenager’s tag-along younger sibling, to be discarded at the first opportunity, WeChat takes the opposite approach. Loubser explained that users can not only engage and communicate with each other through a rich set of features, but can do so with a semblance of security that they can retain their privacy, as well.

One such example is that if you add a friend to your WeChat profile, that person can be easily deleted or blocked at a later stage and need never have any of your other private details. This is true for whether the contact in question is an acquaintance you met at a bar turned stalker, or a business manager who considers spamming customers to be a viable marketing strategy.

Indeed, the app runs on three ‘tracks’. The first of these caters to general users who just want to communicate with each other via text or media rich content such as images, video, their location or the increasingly popular recorded voice notes.

Loubser revealed that also gaining popularity is the use of visual communication in the form of enriched, animated emoticons. Indeed, he affirmed that people do appear to be adopting communicating through visual aids alone; something which the rich emoticons enable.

The best part though, is the fact that users are not subjected to any advertising,and the aforementioned emoticons are provided for free.

Secondly, the app has a social aspect to it as well, enabling users to create feeds and share them with their contacts. These feeds are only visible to the contacts one predetermines, they are not public and this should add an extra layer of privacy when communicating socially. Additionally, users can further create custom contact lists, to share their feeds with a group of selected contacts as well.

The question becomes then, how exactly does the company plan to monetise the app? The answer is through its third track, namely brands that want to be able to connect with potential customers and its followers. Brands can do this via broadcast messages to their followers, although they are limited to one per day to avoid spamming scenarios from arising.

As to the frequency of updates, Loubser explained that the company would only update when necessary, and generally would do so to add new features. That feature list though, is already extensive.

A few of the highlights include Moments, which enables users to share photos, texts and URL links with friends and contacts, while Hold to Talk enables users to send voice messages using one button press, and Group Chatting offers the facility to chat with up to 40 people simultaneously. 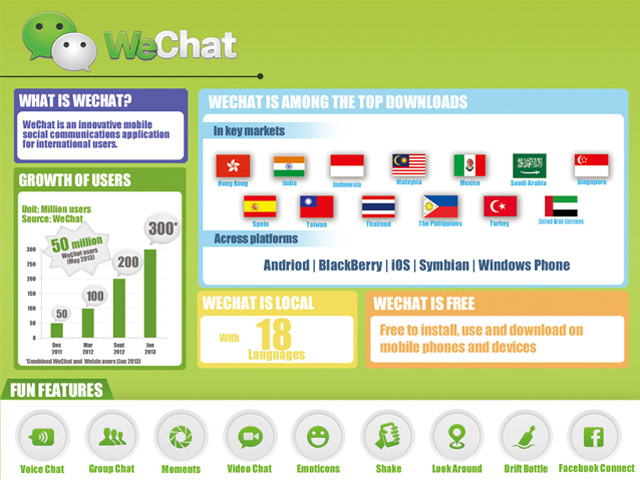 This infographic shows WeChat at a glance.

The features we found most interesting though, were the location based ones. Look Around enables one to see, at a glance, who is on WeChat in their vicinity. Harkening back to the privacy concern, Loubser explained that activating LookAround does make one visible for a short period of time, although one can choose whether to stay invisible to others’ LookAround scans or not.

This feature though, offers some interesting possibilities for the app to be used in augmented reality games or location-based scavenger hunts. However, while Loubser added that there were no stated plans by Tencent to this effect, he noted that the company did have a strong footing in social gaming.

Another interesting feature that takes advantage of devices with an accelerometer is Shake. This enables users to quickly add each other to their contact list if they are in the same proximity by shaking their device. For those phones which don’t have an accelerometer, such as older BlackBerry models, this functionality has been replicated with a button press.

As to why a user should, or would choose WeChat over other apps or means of communicating, (such as WhatsApp for example), Loubser pointed out WeChat’s strength, namely, a rich user experience for general users, and a more controllable interaction for brands and their customers.

He further stressed that Tencent was “obsessed” with user experiences, namely creating the best, smoothest experience possible. Considering that the app is free, available on multiple platforms and has a strong feature set to offer, it’s hard to argue against downloading it and giving it a chance to become one’s go-to social mobile app.

Now, the company’s focus on Africa is good news for local users who are seeking another way to chat and connect, and who are a little more privacy-savvy than your average, and blissfully ignorant, social media user.

“We are extremely enthusiastic about WeChat’s prospects for growth in Africa. Traditionally, mobile users tend towards services that enable them to engage in conversation without restrictive costing models. The fact that WeChat is a free service equipped with unparalleled voice, video, photo and text sharing functionality bodes well for its continued progress on the continent,” he concluded.