After an estimated two years of development, the Yahoo! owned online photography application Flickr debuted a complete redesign for its 4.0 iteration, bringing not only a new look and feel, but also a few additional tools as well. Flickr 4.0 went live late yesterday, and has one particular aim in mind - to make users lives' easier by providing seamless photo integration and archiving across a myriad of devices.

In debuting this new look Flickr UI, the company cited the fact that an estimated 3.8 trillion photos had been taken up until a couple of years ago. As consumers nowadays take more photos than ever, across a range of different devices, Flickr has seen the need to make access and archiving of those photos more efficient. With 1000 GB of free storage space already available to all Flickr users, the company felt a need to design a set of tools to better aid the users organise all their photos and images. .

With that in mind, Flickr has debuted Camera Roll and Uploadr. The latter (available for both Mac and Windows users) will allow Flickr account holders to upload vast quantities of images to their newly received storage. The system is device agnostic and app agnostic, and works with everything from iPhoto to external hard drives, according to Flickr. The Uploadr feature also extends to iOS and Android mobile device users, backing up photos to one's Flickr account almost immediately after they're snapped. 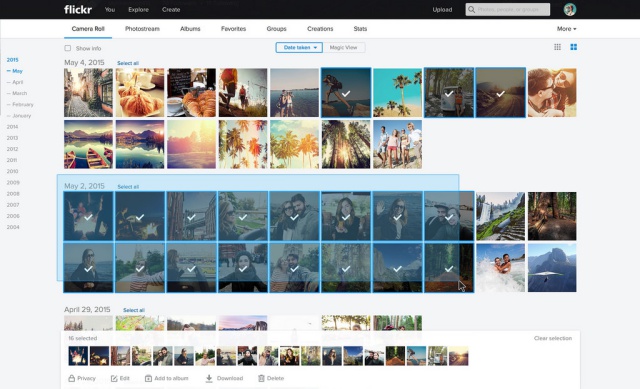 Camera Roll is designed to make wading through a vast catalogue of images easier, with specific gestures associated with mouse movements or trackpad swipes. It also allows users to tag, describe and add titles to large sets of images, in an effort to make organisation and management a touch easier. Furthermore, Camera Roll features a "Magic View" button, which automatically organises photos according to landscape, portrait, black and white, people and a few more filters.

With Uploadr available for the Mac and Windows when transferring from a DSLR, as well as iOS and Android when dealing with direct uploads from a mobile device, the new look Flickr has a few more bases covered. 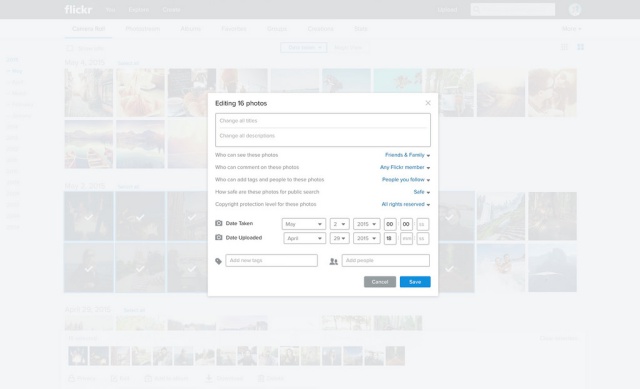