Acrobat Reader users will be able to share documents between all of their devices and PCs via Acrobat.com, directly within Reader. This means that when you are reading a documents on your home PC for instance, and then need to leave to catch a bus or train, you’ll be able to save it to Acrobat.com, and then access it from your smartphone or tablet.

In addition to the actual documents, any comments and edits that is made by users on the document will also automatically be saved to the cloud, which is quite similar to the way Google’s Drive works. This functionality worked perfectly when we made notes on a PDF document and uploaded it to the cloud using our Galaxy S3, as the exact same document with notes and all was accessible from our Sony Xperia sola test unit. 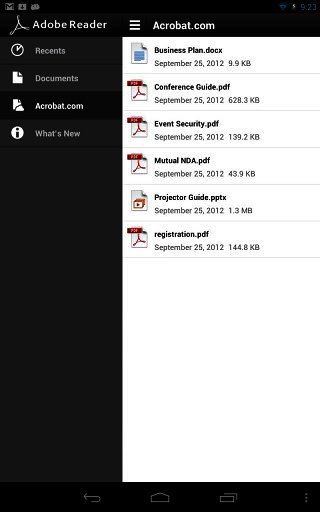 Beyond this cloud storage ability, Acrobat Reader has also gained enhancements to the interactivity of forms, a full range of text selection as well as highlighting features for Asian language (Japanese, Chinese, Korean) text, and improved printing capabilities for iOS.

Android users can already download the update for free from Google Play, whilst the iOS version is currently awaiting approval from Apple.

Is this the next step in software?
BlackBerry Tablet details emerge