BF3 offers one of the best multiplayer experiences.
9.1    Gameplay
7.5    Story
9.6    Presentation
9.5    Lasting appeal
4
As one of the big first person shooter franchises out there, Battlefield 3 (BF3) has a lot to prove, especially with a certain Modern Warfare 3 also aiming at the lucrative Xmas market. While previous incarnations have been well received, there has been some critique levelled against the single-player campaign, while multi-player also had a few niggles.

Let’s get it out of the way then – if you are looking for a hang-on-tight rollercoaster of a single-player campaign, you can do better than BF3. But if your interest is in a most-excellent multiplayer experience that will suck away most of your free-time, well step right this way gentlemen.

To fully understand what DICE (the developers of Battlefield) have done with Battlefield 3 multiplayer, one needs quickly take a look at its illustrious history.

Battlefield 2 was released six years ago to universal acclaim, with its multiplayer featuring large open maps as well as tight urban ones, plus multiple vehicle types (jets, tanks, APC and more). It also had a multitude of player classes which many gamers found quite daunting.

A year later, DICE released Battlefield 2142, similarly featuring some excellent maps, but with a lot less vehicles to choose from. Luckily they also scaled down on the amount of classes. Just four were present - Assault, Support, Engineer and Recon, which made BF2142 a well balanced experience.

BF3 takes the best from BF2, including excellent maps accommodating different playing styles, a large array of vehicles including jets, and combines it with the limited player classes from BF2142. The result is certainly some of the best multiplayer action ever experienced online, with the PC version supporting up to 64 players simultaneously. 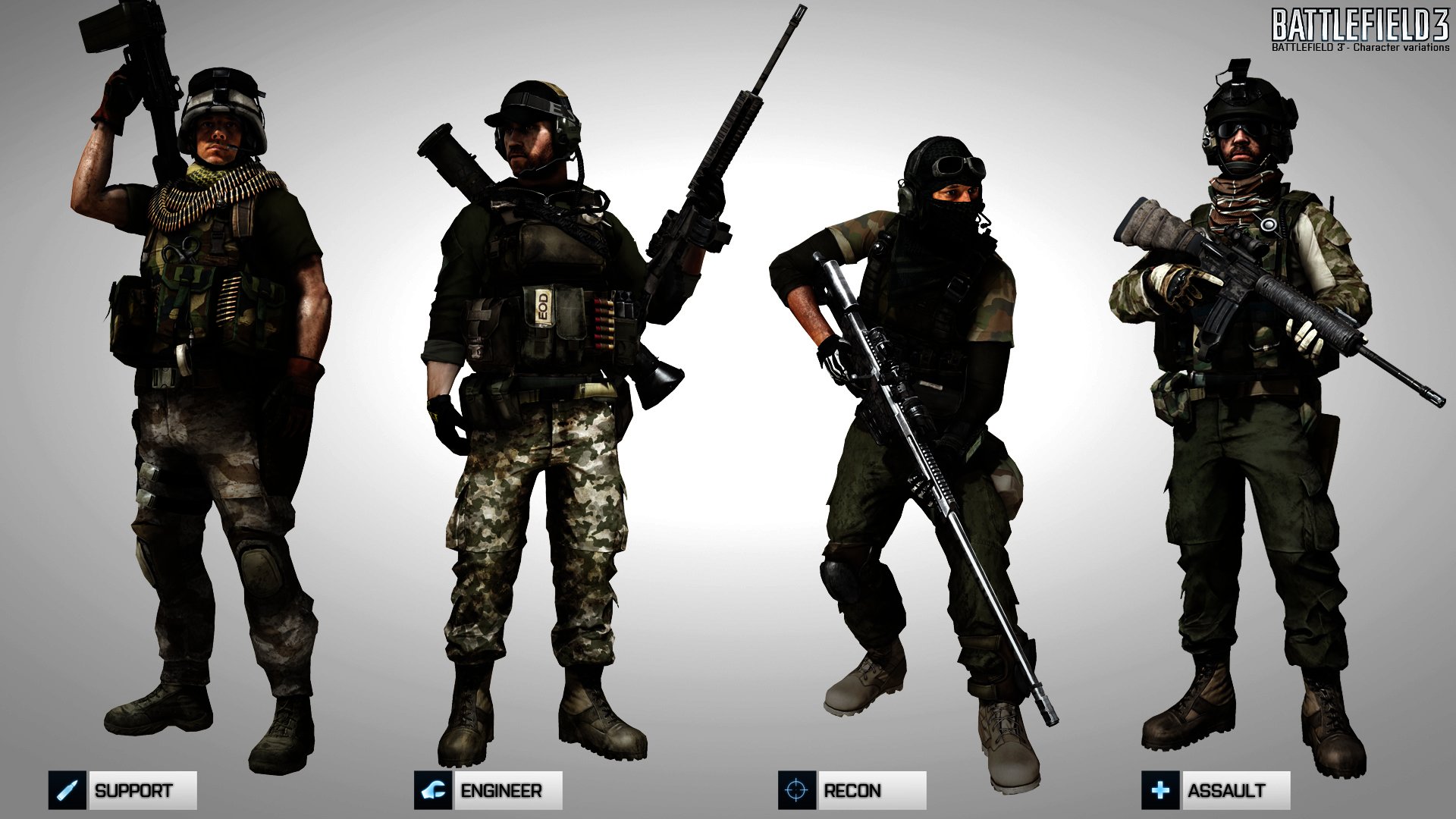 The Assault class is, as the name suggests, your main “get in there and shoot” class. These are the guys on the front lines charging in with powerful assault rifles to clean up a room. Assault also doubles as medics, making them a very powerful instrument for combat.

The Support class comes with an LMG (Light Machine Gun), with the role to provide ammunition for team members and generally lay down suppressive fire (more on this later). The Support class’ offensive capabilities have been expanded, now offering the deadly M224 portable mortar, making light work of taking out campers and suppressing a group of players.

It’s the Recon class which is the biggest recipient of changes. They still serve as snipers, but BF3 tries to lessen the usual “too many snipers on this map” complaint that plagued the previous Battlefields. Also, all sniper rifles now feature “scope drift”, making aiming more difficult, while scope glare is also present. This is basically a very bright light that reflects off your scope, alerting enemies to your position. While the Recon class still has its use, they are no longer a must-have for any team.

Helping to keep things interesting in multiplayer is BF3’s excellent stats and progression system. As you gain more experience you rise in rank, while better weapons and upgrades in equipment are also provided. It can be a bit daunting for new players to start out in multiplayer, since it might feel that emptying a cartridge into a more advanced player does next to nothing, but it forces you to invest the time and effort into gaining more experience.

BF3 also does a mean job of keeping track of your stats, providing details on how long you’ve played with a certain weapon, how many kills you’ve accomplished with it, kills per minute and accuracy. 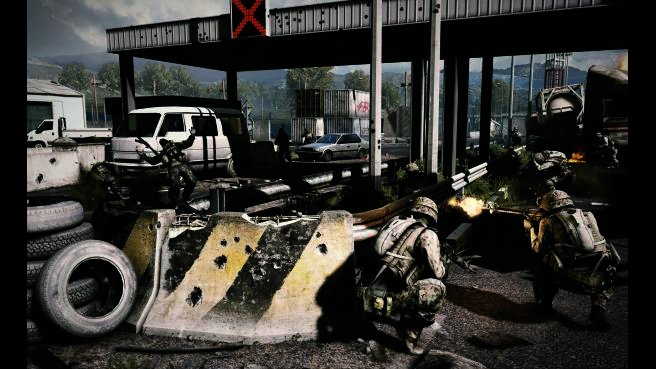 Moving onto the game play types, nothing has changed from the previous Battlefield games. The game still features Conquest, Rush, Team deathmatch and the Squad variants of those, while squad assignment can be done either automatically or by creating a party from the battlelog.

One of the biggest changes in BF3 is the increased focus on strategic game play. When going prone for example, your soldier will now actually do a realistic prone manoeuvre, adding to the realism of the game. The downside to this is that for a few seconds, you are vulnerable, so you need to accurately determine the best time for this.

Standing up from prone will see your soldier pushing themselves up with their hands, again leaving you vulnerable. The beauty of this is that, in order to survive in the game, you need your squad members as much as your squad members need you.

Battlefield 3 has also made large strides to focus more on team-play than ever before. It is quite possible to not take down a single target, but still rank as one of the best players in the game. This is because the game rewards players handsomely for team-based play, such as providing med and ammo packs, engineering repairs, spotting targets, flag capture assists, kill assists etc. 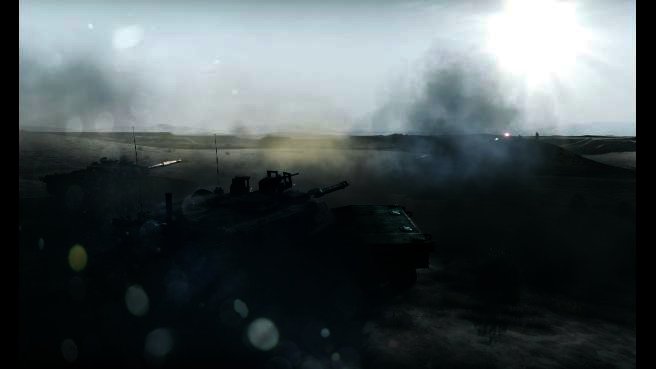 Tanks, dust and sun glare, of which you'll see a lot of
Suppression and vehicles

An interesting feature in BF3 is the suppression mechanic. When you are behind cover but under fire (this is where the support class shines), your point of view (POV) will become hazy, sound will be muffled and aim is affected. This is a clever tactic employed to help with flanking, so if you are currently being suppressed by someone, expect an Assault class to very soon hop over your cover to take you out.

Vehicles have also made a larger comeback in the game, none more so than the long lost love of a lot of players - the jets. You get two classes of jets in the game, with the Super Hornet and Flanker as your primary air combat jets, while the Frogfoot and Thunderbolt are your primary ground attack jets.

It must be noted that while it is possible to attack both ground and air targets with your jet, the overall effectiveness is determined by the add-ons you have chosen. Kitting out your jet for ground attacks will improve killing enemies on the ground, but leaves you a soft target for jets kitted out for anti-air combat. Once again, just like the infantry classes, it's a strategic move and you as the player are left to decide what is best for the situation. Just remember – it’s trial by fire, since there is no way to practice flying the jets beforehand.

It’s not possible to hook up with a pal to complete the single-player campaign together, but BF3 does provide a co-op option. Unfortunately it’s not that extensive, featuring only six maps, each with a different story. The first two maps are open to play, with each map afterwards being unlocked by completing the previous level. There is at least some differentiation between the different maps, requiring for example flying in a helicopter, some sharp-shooting and a lot of defending. Depending on your skill level, co-op will not take you more than a couple of hours to complete. Completing co-op missions also unlocks weapons that can be used in multiplayer, helping extend the replayability of the co-op campaign.

Going it alone – the single-player campaign

As stated in the beginning of the article, the single player campaign does not come as highly recommended as the multiplayer, and we can almost bet that you’ll be hooked on multiplayer way before you’ve finished with the campaign.

The story is told via flashbacks from Staff Sergeant Henry Blackburn, currently under interrogation by the CIA. Blackburn starts recalling his battles against the People's Liberation and Resistance (PLR), an insurgent group out of Iran, and let’s just say that things get a bit complicated when missing nukes enter the equation.

Earthquakes, the Russian military, a recorded execution and subway chases all have a part to play in the single player campaign, and while there were a few levels that did not grab our attention, a few really stood out, particularly a mad chase through the streets of Paris. The exploding Parisian masonry provides a good experience of the new Frostbite 2 engine, the successor to the acclaimed original Frostbite developed by DICE for Battlefield: Bad Company. Frostbite 2 makes for an excellent graphical experience, involving massive buildings collapsing, good close-up detail and maybe a bit too much sun glare.

Also worth mentioning is the sound, which DICE went to a lot of trouble to match as close to the real thing as possible. Being suppressed in a market with shots ringing over your head and a tank rumbling in the background, is about as immersive as you can get. 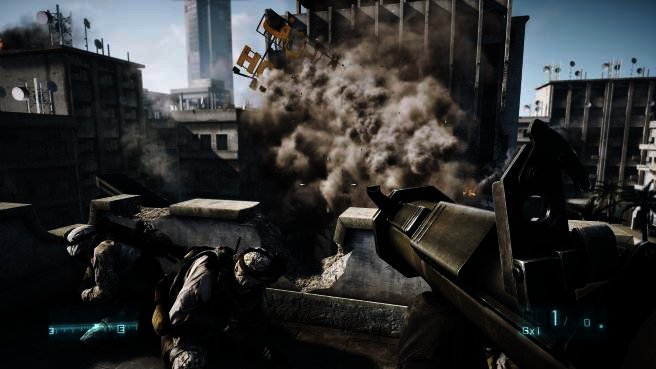 When you buy Battlefield 3, you’re not buying it for its single-player campaign. Yes, certain segments of the campaign are entertaining, but overall it’s much of a muchness for anyone who played Call of Duty: Black Ops.

BF3’s real fire-power lies in multiplayer, and we’re happy to report that DICE have learned from the previous Battlefields’ mistakes to improve and expand on the overall gameplay experience.

A good combination of maps catering to a wide variety of preferences; the return of the jets; rewards for assisting and not just kills; and a ranking and upgrade system that hits the sweet spot, all makes for a certainly one of the best, if not the best, multiplayer online experience.

Battlefield is currently available, retailing for R399 for the PC version.

PROS
Online multiplayer is excellent, jets make a return, rewards not only for kills made, plenty of unlocks

CONS
Single-player only so-so, co-op could have been longer, online play can be daunting when starting off new.
TAGS:
battlefield 3multiplayerDICEEA
USER COMMENTS