Enslaved Odyssey to the West

The action adventure genre is jam packed with a number of fantastic titles, including the likes of the Uncharted, Ratchet and Klank and Tomb Raider franchises. Naturally then, new entrants into this market have a lot to live up to should they hope to be noticed.

Enslaved: Odyssey to the West is the most recent young hopeful to take aim at the lofty goal of delivering a successful action adventure title - but does it achieve this? Here’s our take on this post war Western pilgrimage.
Storyline
Developed by Ninja Theory and published by Namco, Enslaved is set 150 years into the future., post global war which has all but destroyed the earth itself and has populated the earth with an antiquated, yet powerful group of robots which seeks to eradicate what remains of humanity.
Enter our protagonists - Monkey, a powerful slave warrior, and Trip, a lithe and intelligent character. Both manage to escape a slave freighter just before it crashes, although Trip manages to do more than this - she enslaves Monkey with a magical headband and forces him to accompany her to her village 300 miles to the west.
Angry at first, Monkey eventually realises that there is nothing he can do and agrees to accompany Trip. Throughout their adventure, the two encounter enemies in the form of the robot army and friends in the form of fellow survivors. Eventually both characters become friends and there is no longer a need for Trip to control Monkey with the headband.
At this point the two realise that there is a much larger force than random, hell bent robots at play. Known as ‘Pyramid’, Monkey and Trip dedicate themselves to destroying whatever may construct their path towards freeing the world’s human slaves. 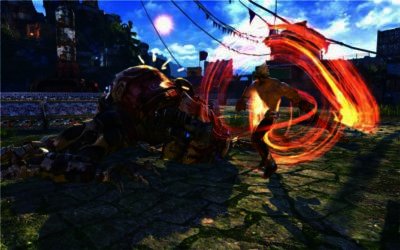 Gameplay
The gameplay in Enslaved is very similar to that found in other popular action adventure titles, particularly the Uncharted franchise. Players control monkey from a third party perspective, directing him over a number of obstacles with a dynamic camera angle which shifts according to the task at hand.
Monkey is equipped with a number of skills (primarily physical) including the ability to climb, wield a staff and perform a few choice melee moves in the beginning which later evolve as the player gains experience.
Power and abilities can also be upgraded by collecting red orbs which are littered throughout the game world.
Overall we found the gameplay to border on that found in older arcade based titles. Throughout the game the pace is so frenetic that it adds an almost comical feel to Enslaved and certainly detracts from the realism of the title. This in itself is not a negative thing as it adds an enjoyable dimension to the game, unfortunately it eventually becomes tiresome.
We feel as though Ninja Theory might have been better served by adding a more dynamic feel to Enslaved. Instead, it more resembles an advanced (yet enjoyable) version of Crash Bandicoot with robots and weaponry. 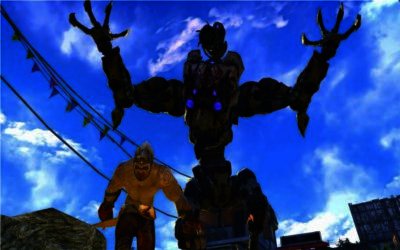 In it for the long haul
If you’re looking for a game which is easy on the eye, simple fun and relatively quick to complete then Enslaved will check just two of these boxes. Comprising of fourteen chapters it’s anything but short and sweet, nonetheless players looking for a challenge will be pleasantly surprised. 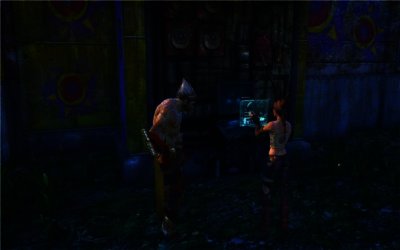 Conclusion
Enslaved is no Uncharted 2 or Tomb Raider, but it does a good job of injecting some frenetic yet simple fun into the genre. Overall it’s a great title to pick up and play, but it won’t blow your hair back for years to come.

CONS
May be too lengthy.
TAGS:
enslavednamconinja theory
USER COMMENTS