Motion sensing has been a mainstay in the gaming industry since the introduction of the Nintendo Wii back in 2006. We later saw Sony’s Move joining the fray in much the same way as the Wii before it, but as Microsoft's turn to fool around in front of the TV came about, the company opted to go a different route, giving gamers full body motion control instead of limiting it to a stick with a weirdly coloured ball at the end.

The idea behind the Kinect is immediately enticing, control a game using nothing but your body movements, you “become” the controller as the Xbox marketing team put it so many times. So how does the Kinect hold up to scrutiny, and is it worth it as a gamer (or non-gamer)?
The package
Let's start with the basics, what users are actually getting when they purchase a Kinect bundle. Firstly, a few options are available, some include the new “slim” Xbox 360 console and other bundles include specific game titles, but we'll be looking at the standard Kinect bundle for now. This bundle includes the Kinect sensor, the Kinect Adventures game, a USB extension cable and an AC adapter in addition to the multitude of pamphlets and instruction manuals always along for the ride. This standard bundle assumes you already own an Xbox 360 console, if you don't, you'll obviously need that first.
Setting up the Kinect is a largely straightforward affair, and especially so if you own one of the new Xbox 360 “S” consoles, as you can simply plug it in via the dedicated Kinect port at the back and start playing. If you own an older Xbox 360 console though, the Kinect has to be connected via a USB cable which splits to an AC adapter to supply the extra power needed to run the sensor (don’t worry though, everything you need is included).
Turning on your Xbox 360 after the Kinect sensor has been connected, it will use its motorised tilt function to try and identify any humanoid individuals standing in front of its cameras. For many this may be where Kinect starts actually requiring effort on your part as you have to rearrange the living room to make sure Kinect has enough room to see you. Ideally, the Kinect sensor requires that you be between 1.8 – 2.4 m away from the TV, with no obstructions such as coffee tables between you and the sensor. It can be a bit of a headache trying to find somewhere with the perfect amount of space needed for Kinect, but after moving around a few things it shouldn't be too hard, except if you live in a very small apartment.

How does it work?
Looking at the Kinect sensor face first we see three cameras, in the middle is the RGB camera used for facial recognition, video chat and other in-game features. The outer cameras are what takes care of 3D depth sensing, the most important aspect in recreating your movements on the screen. An infrared emitter first floods the room with invisible infrared light and a CMOS sensor then looks at how the light is reflected back, this data is then sent to the console, and it then calculates whereabouts you are in the room.
Four microphones are also embedded in the sensor, used to pinpoint audio and distinguish between background noises and voice commands. In a move that is very unfortunate for us and basically the rest of the world, Microsoft has decided not to include voice support with Kinect in all countries.
Only gamers in the United States, United Kingdom, Mexico and Japan have been able to control their Kinect via the power of their voice thus far. Microsoft has said that voice support for other countries will be implemented from early 2011 and has said that the reason behind the delay is that Kinect cannot accurately pick up all the different accents and versions of English found throughout the world (not even talking about other languages here).
Places like Canada, Australia and parts of Western Europe should be receiving voice support somewhere around February to March this year (if industry rumours are to be believed), but we aren't getting too excited about a quick South African release yet. No word on how Microsoft is doing teaching Kinect to respond to “howzit boet” as of yet.
So now that we have multiple cameras and microphones, the final ingredient in creating the Kinect's magic is the actual software used in the system. The software is what creates the skeletal mapping and 3D recognition that enables us to play the games. And astoundingly, it apparently takes very little effort to do, as only 60 MB of the Xbox 360's 512 MB of memory is reserved for the motion sensor. 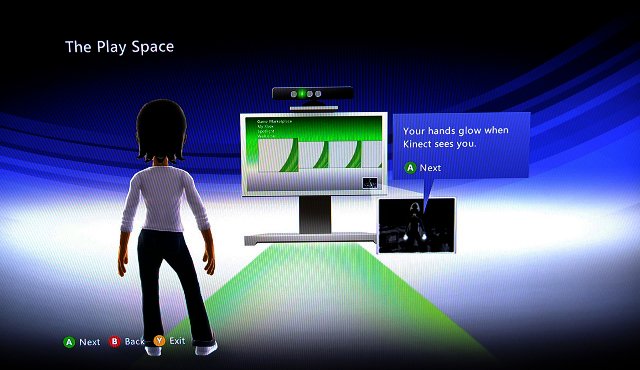 Let's Kinect
In order for the Kinect to be able to recognise you at a glance (yes, Kinect can recognise individual people), you need to calibrate our Avatar ID so Kinect can match your face to a user account on the Xbox 360. It's all very simple and everything is automatically handled by the Kinect sensor when it is used for the first time. When calibration is done Kinect should be able to recognise you without the need to sign in with the controller.
Now you're all set and ready to go. Using the menu system for the first time is a fun experience in itself as you get used to controlling the on-screen pointer with gentle hand and arm gestures. Simply stand the correct distance from the sensor and start moving your arms and you'll be able to get a hang of it pretty quickly.
For the most part we were impressed with the menu system, although at times it did prove to be a little finicky, especially when it comes to “pressing” smaller buttons on-screen. Another thing to get used to is that hovering over an icon won't select it immediately, instead you'll have to hover for a couple of seconds as a quick timer runs out. All in all the menu system was fun and simple to use, but looking back on it a controller would still be faster.
Another universal Kinect feature to get the hang of is pausing the game. Since you aren't using a controller (you still can if you want), players will need to stand upright with their right hand down at their side, left hand raised up, palm out at a 45 degree angle, hold this pose for a couple of seconds and the game will pause. It sounds complicated, but it's really simple when Kinect visually shows you how to do it. 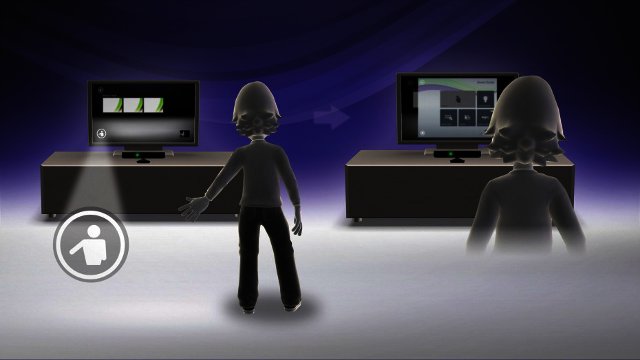 Let's play
So then, let's finally get to playing some games. As it is the bundled title, we'll be giving a quick look at Kinect Adventures here, with other Kinect title reviews to follow in the coming weeks. (Check out our review of Dance Central so long) Kinect Adventures is the standard minigame bundle you would expect, it includes five different games and is intended as an introduction to the Kinect's capabilities.
Kinect Adventures’ minigames  include 20,000 Leaks, River Rush, Rally Ball, Reflex Bridge and Space Pop. The games do a good job of introducing you to the concept of being the controller and makes for some good fun with friends, also introducing some varied ways of using motion control.
In the 20,000 Leaks minigame for example the player (or players, up to two) are trapped in a glass cube underwater. The players' objective is to keep their underwater tank from springing any leaks as a myriad of remarkably aggressive sea creatures bump into it time and again. Players will need to use their arms, legs and even heads to stop all the leaks as the stages increase in intensity, creating a fun experience albeit one with little replay value. 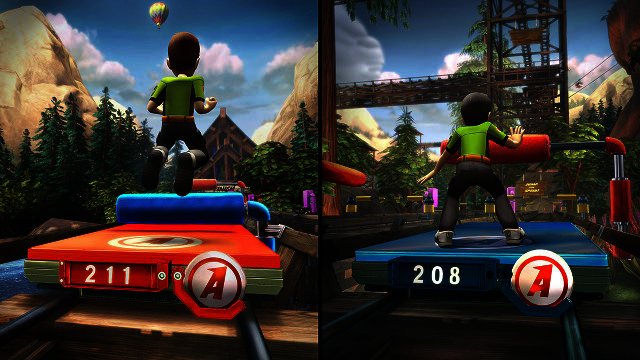 River Rush on the other hand has one or two players standing in a rubber raft as it careens down rivers and canyons defying physics at every turn. Players have to work together to steer the raft, having to both step in the same direction to move the raft in the intended direction. YPu also need to jump in unison to clear obstacles and collect pins to help raise the score.
Rally Ball is a game similar to handball where the players has to use their bodies to hit flying balls at targets situated at the end of a virtual hallway. Certain targets will explode in a flurry of additional balls though, so be careful, it can get quite confusing trying to keep track of them all.
If a race is more your style, Reflex Bridge is a game in which two players compete against each other. The players stand on platforms mounted on a track much in the same vein as a roller coaster, they then race one another while jumping over hurdles, dodging obstacles and jumping in place to move their cart along faster.
The last game in the Kinect Adventures bundle is Space Pop, also being the most relaxing of the bunch. In Space Pop players find themselves in a virtual zero-gravity room as soap bubbles pop out of the walls, floor and ceiling. The players then have to pop the bubbles, being able to utilise depth by moving toward and away from the Kinect sensor and flapping their arms to gain some extra height.
All the games functioned as they should, but as many have pointed out, the Kinect's accuracy still isn't as good as one might hope, especially when making fast, erratic movements. In general we found that slower, more deliberate movements registered much better with the sensor, even though you might be tempted to jump like a maniac trying to beat your friends.
At the end of the day we felt that the Kinect Adventures bundle is a good introduction to Kinect's capabilities and given the state of some other bundled titles, it's quite good actually. The games probably won't entertain for too long though, so if you like what you see we'd recommend investing in some additional content. 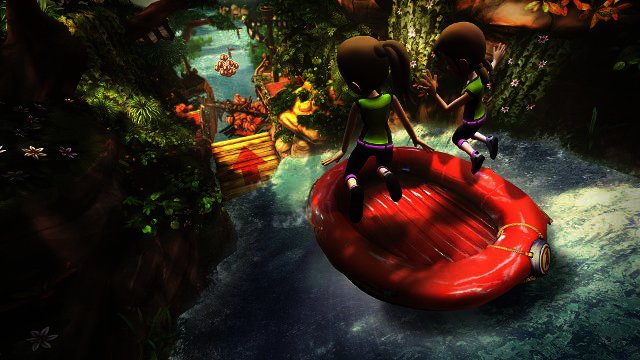 Conclusion
The Kinect has been with us for a little while now, and while we think the system has a huge amount of potential, there's still some growing pains that needs to be addressed. We'd like to see Microsoft working on the accuracy and very importantly, adding voice commands for the rest of the world. They might do well to look at what hackers and modders are currently doing with the system.
That said, Kinect is a great social experience, and it’s easily enjoyed by both friends and family. Someone who’s never seen an Xbox controller will be able to enjoy Kinect, it’s just that accessible.
The peripheral’s first showing definitely impressed us and it's clear that this unique entry is going to be able to stand firm alongside the likes of the PlayStation Move and Nintendo Wii. We're just waiting for that rumoured Star Wars game.
The new Xbox 360 4 GB console with Kinect included is priced at R3699 and if you already own an Xbox 360 console, the Kinect bundle will only set you back R1999.

PROS
A new and enjoyable way to interact with the virtual world.