The Galaxy S5 is Samsung's new flagship for 2014, offering more Android-powered quality we've come to expect. But does it have enough enhancements to warrant upgrading?

For the past four years, the Galaxy smartphone range has been the reigning king among Android-sporting devices. In 2014, Samsung seems to be sticking to its winning formula, with the release of its Galaxy S5, ensuring the South Korean manufacturer maintains its place atop the Android hill. 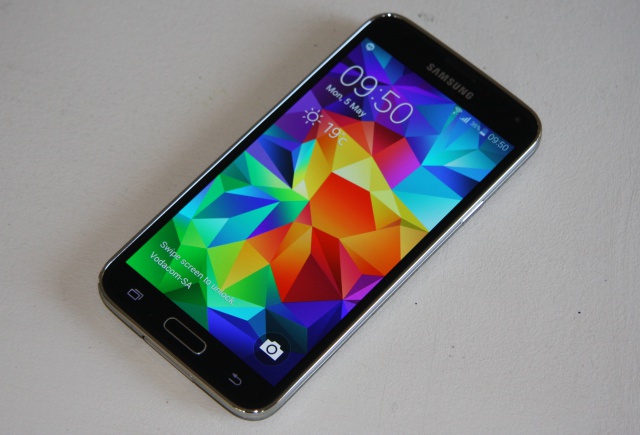 It's been a little under one year since we put the Galaxy S4 (review) through its paces, so what changes has Samsung made to its new top-tier model? For one, the S5 features a miniscule adjustment to its dimensions, now fitted with a 5.1" display, which makes it 0.1" (2.54 mm) larger than the S4's 5" screen. The S5 is also 15 g heavier than last year's model, weighing in at 145 g.

These minor modifications are echoed throughout the Galaxy S5, with Samsung making incremental changes to the overall design of this latest device, when compared to the S4. An example of this is the slightly increased curve to the S5's edges, which results in a longer length to its silver framed sides.

One of the major changes however, is the S5 newly integrated water and dust-proof design, aiming for a level of durability similar to that Sony's Xperia Z smartphones. The Galaxy S5 is IP67 certified, and boasts water resistant capability at one metre for an estimated 30 minutes, according to Samsung.

When we decided to put the S5's waterproofness to the test (as pictured below), we placed the smartphone in jug of water for roughly twenty seconds. After removing it, the device functioned as per usual, with no operating issues to speak of. Upon opening the dimpled plastic back cover and closer inspection however, there was clear traces of water inside the device. The battery itself still remained dry, with water only accumulating at the bottom of the S5. But given a full five minutes under water, who kows what kind of damage could have occurred. 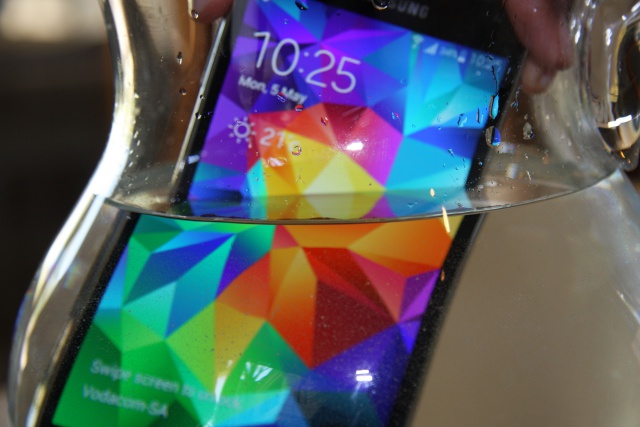 This may be a symptom of Samsung sticking with its plastic-heavy design, this time with a slightly more dimpled plastic back cover. This does offer an aesthetically pleasing change, but the new back cover does not offer an increased level of handling compared to the standard plastic cover found on previous Galaxy S models.

From the first moment you boot up the S5, you immediately become aware that you have a supremely powerful smartphone at your fingertips. Powering our review unit is a Qualcomm Snapdragon 801 quad-core chipset which clocks at an impressive 2.5 GHz, 2 GB of RAM and 16 GB of internal memory. This particular chipset is used with the LTE version, with a second 3G enabled S5 coming to SA, incorporating a 2.1 GHz Exynos 5422 processor and 32 GB worth of internal storage. As far as performance and processing capability go, the S5 has few equals, scoring exceptionally well across the board on all the benchmark tests we threw at it.

As with the previous S4 model, the Galaxy S5 has a similarly crisp and vivid display (1080x1920) that brings Android Kit-Kat (4.4.2) to life. It is worthwhile to note that the S5 has a lower pixel density of 432 ppi, as opposed to the S4's 441 ppi. The lessened pixel density of the Galaxy S5 is completely unnoticeable, and the display is still one of the best on a smartphone we've seen.

As far as performance and processing capability goes, the S5 has few equals, scoring exceptionally well across the board on all the benchmark tests we throw at it. The Galaxy S5 scored an impressive total score 39 308 on AnTuTu Benchmark X, placing it above the similarly sized LG G2 (our top phone of 2013, review) which registered 35 737.

Thanks to its removable 2800 mAh Li-On battery, the Galaxy S5 boasts 21 hours worth of talk time (3G) and 390 hours of standby time, according to Samsung. During our testing, the S5's battery performed well, and should offer a solid day's usage. That said, charging the Galaxy S5 does take longer than anticipated, requiring at least five hours to reach full charge from roughly 5% of remaining battery life. Also onboard is the new Ultra Power Saving function that disables all background updates, as well as allows users to pick and choose which applications to keep running and limiting one's Bluetooth connectivity. Samsung believes this leads to 24 hours worth of usage on 10% of battery life. 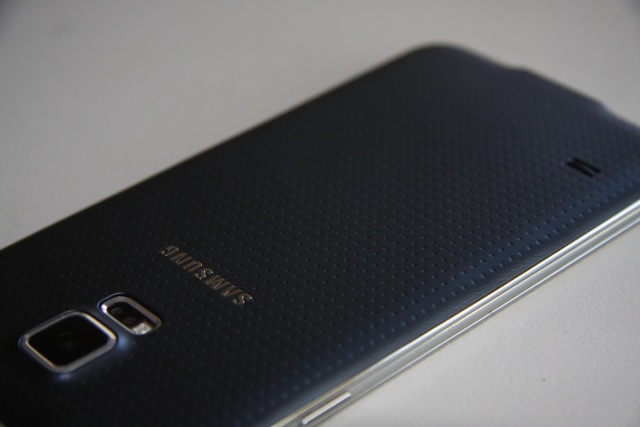 One of the new features Samsung has brought to the table with the Galaxy S5, is a new fingerprint scanner, integrated into the Home button. This addition is an effort on the part of Samsung to offer a greater deal of security to user access and control, when unlocking the device as well as making app purchases and updates. Setting up the fingerprint scanner is fairly easy, with users being prompted to scan their desired finger up to ten times to ensure a solid fingerprint read is taken.

The other key addition is the built-in heart rate sensor that Samsung has introduced, which aims to align the S5 with the current fitness trend sweeping through the tech world at the moment. The heart rate sensor forms part of Samsung's S Health application, which also tracks users steps taken, calories burnt as well as diaries to keep record of calories intake and weight loss.

The heart rate sensor is located by the main camera, and requires users to place their finger on top of it, to get an accurate reading. As with most heart rate sensing applications, the S5's version performs on-par, but does little to distinguish itself from similar applications available to iPhone users.

These additions although useful, do not serve as clear-cut reasons for purchasing the S5, rather adding to an ever increasing list of extras for the phone. 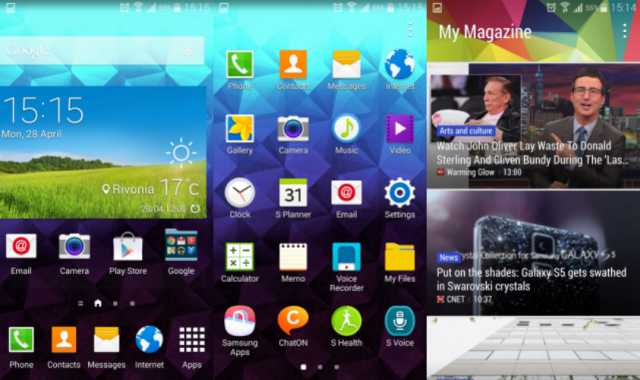 With regard to camera setup, Samsung has incorporated a 16 megapixel primary camera at the rear, capable of capturing images up to 5312x2988 pixels. It is also able to record 2160p content at 30 fps, with its secondary 2 megapixel front-facing camera capturing 1080p video at 30 fps.

This is one area that the Galaxy S5 truly excels, as the enhanced auto-focus feature allows one to capture images a lot faster than the S4 could. This should translate to a definite addition to the "Pros" column of the Instagram-obsessed set.

The S5's screen, although brilliantly luminescent, has its faults, as the 2 mm bezel around the screen makes it prone to touches as a result of misplaced fingers or thumbs on the edge of the device. Throughout our time with the S5, this led to the Flipboard-esque My Magazine application (brought up by swiping from left-to-right) and Phone button being selected every now and then, which can be pretty frustrating.

Another issue we encountered while using the S5, surrounded the Power button, which was sometimes unresponsive. For some reason, it only seemed to arise when using the Galaxy S5 outside, in direct sunlight. We could not pinpoint why this problem occurred precisely, but it did negatively impact the overall experience of the S5.

On the materials front, we fear that the S5 has again fallen victim to Samsung's insatiable love of plastic, something that will continue to hamper its appeal when pitted against the higher levels of build quality found in the HTC One (M8) (hands-on) and iPhone 5S. 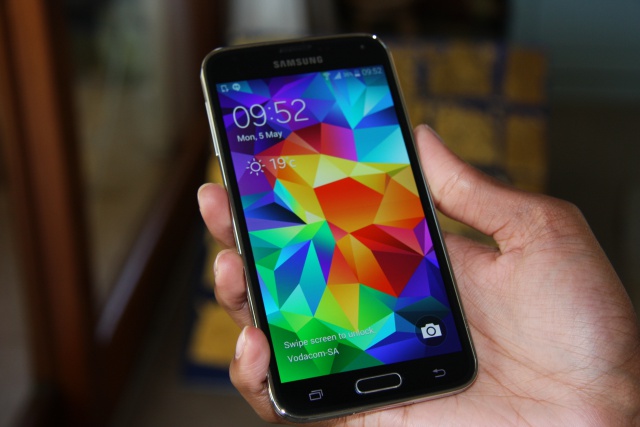 There is no denying that the Galaxy S5 is a well-specced, powerful flagship that any smartphone owner would be proud to carry. Its impressive performance and similarly commanding chipset make it a versatile and solid workhorse capable of coping with demanding work and play.

The main problem lies in the fact that apart from its chipset, the Galaxy S4 and S5 are too similar in both look and feel, and for that reason may not be tempting enough for those people who already own an S4.

When compared to the noticeable changes that HTC has made on its One M8, the Galaxy S5 seems more like the iPhone’s upgrade from the 5 to the 5s.

For more detail on offers available for local users, check out our hands-on with the S5 at its launch last month.