When Samsung declared that it would be foregoing Mobile World Congress in favour of a separate event to launch the Galaxy S8 at a later date, alarm bells may have rung for some. Especially as the company was still trying to reassure consumer confidence following the Galaxy Note 7’s battery issues.

In the end, however, it turned out to be a masterstroke. With no real competitor setting itself apart at MWC 17, it left Samsung with the opportunity to later thoroughly impress with its Galaxy S8 and S8+. Fitted with a new “Infinity Display”, longer body and well specced components, the latest flagship from Samsung continues where last year's model left off. But is it the best smartphone we'll see in 2017?

To fully answer that question we'll have to see wait until the latter half of the year to check what the LG V30 and forthcoming Apple iPhone have in store. For now though, it's shaping up as the best Galaxy S device to date, and the leader of the 2017 pack. 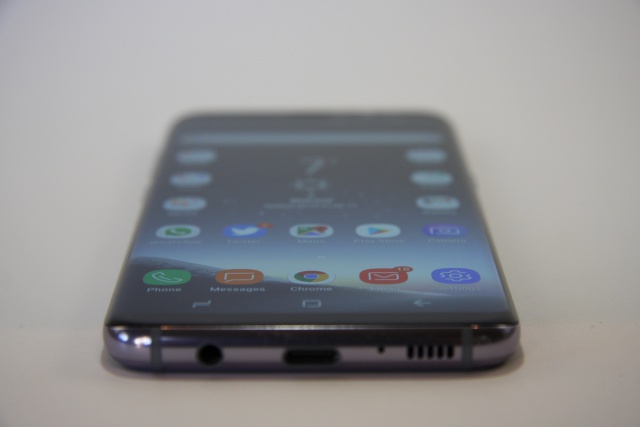 The reasons? First of all, it's the look and feel of the new offering. Key to the S8 aesthetic is the Infinity Display, which aims to create a bezel-less, borderless screen and the illusion of a single pane of glass between the user and smartphone. As lofty as that idea may be, the S8 does not quite achieve this with the bezel and frame still visible, particular on any of the non Midnight Black options.

That said, the increased real estate (5.8", 1440x2960 resolution) offers plenty of display to enjoy, and certainly a more immersive experience compared to other similar sized smartphones or phablets. It is particularly impressive when watching videos and playing games, making the S8 a great option for users that consume a lot of content.

Things look a shade sharper too compared to the S7, which is quite the feat given the display quality on that device. With a 570 ppi pixel density to call upon, the S8 is one of the crispest displays you're likely to find on a flagship device at the moment.

As for the rest of the phone's design, things should be pretty familiar to Galaxy owners, and in many respects, the S8 feels like a slight evolution of the S7 edge, with the slightly longer screen being the key difference. 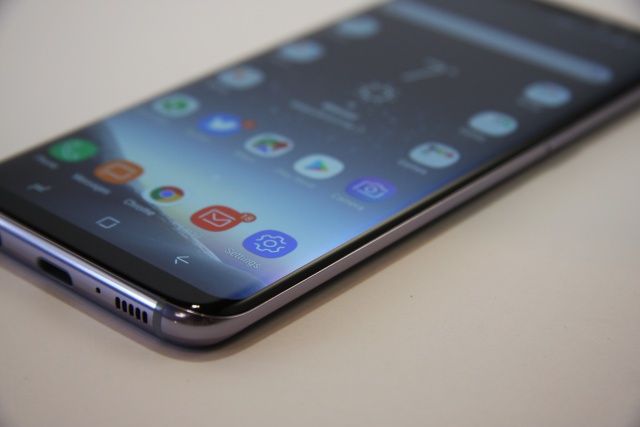 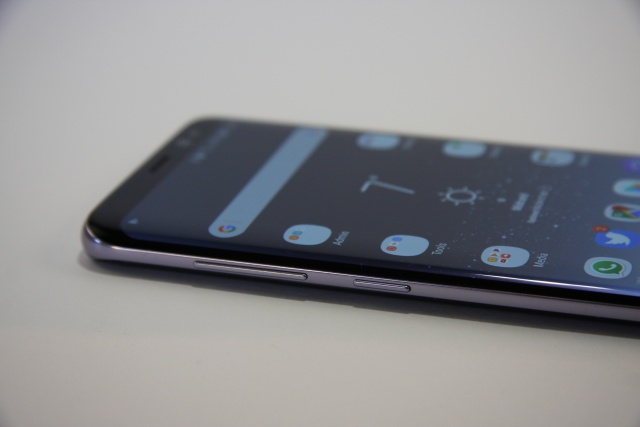 Looking past the design for a moment, the Galaxy S8 essentially sits at the zenith of Android phones when it comes to specifications, perhaps matched only by the Sony Xperia XZ Premium. To this end there's an octa-core Exynos 8895 chipset (EMEA region only) running things, with 4 GB of RAM and 64 GB onboard storage (plus up to 256 GB extra storage via microSD slot). That mix yields a supremely powerful device, both in benchmarking and real-world use.

Regarding the former, the Galaxy S8 mustered a score of 168 990 in Antutu, making it the top performing smartphone we've benchmarked all year. Competitor devices such as the LG G6 and Huawei P10 garnered scores of 137 637 and 143 668 respectively, putting the S8's chipset performance in perspective for those for whom bragging rights count. 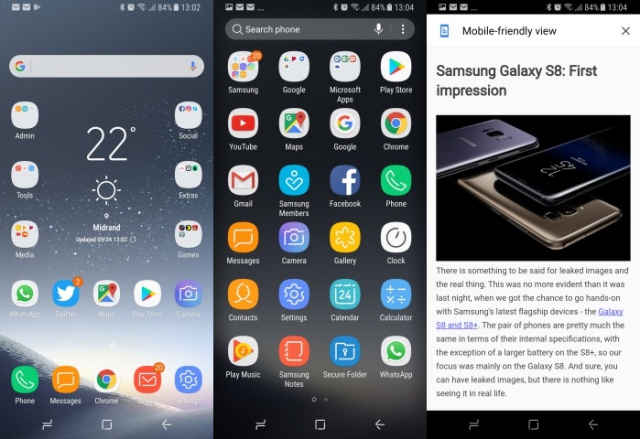 Luckily, the S8 doesn't just perform well in benchmarks. Multitasking is a breeze on this device, with things ticking over nicely and no lag being experienced during our time with it. It can also endure a full day's heavy use thanks to its 3000 mAh battery. By flagship standards that may be a little small, but Samsung's power management tool ensures battery intensive apps are put on hold in the background when not in use.

If we were to criticise Samsung, it would be that the increased screen real estate is not being made the most of. The physical home button/fingerprint sensor is gone, but it has not been replaced with a virtual version of the latter, which could have been an interesting feature. Add to that the all but forgettable edge panel, which can quickly bring up contacts and apps but doesn't form a significant enough part of the user interface, and it seems like the South Korean manufacturer has not fully capitalised on things. 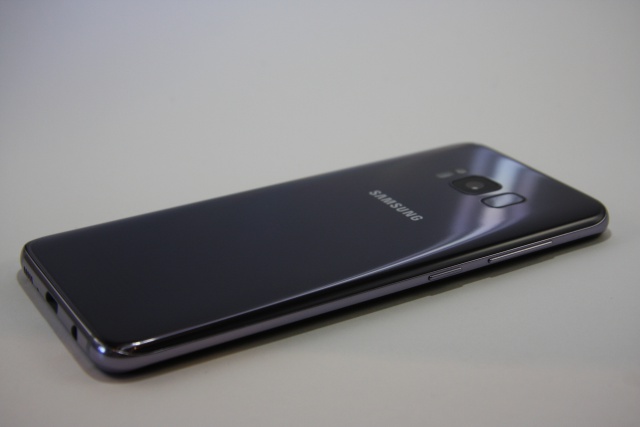 Shifting to the rear of the Galaxy S8 you'll find the primary camera - a 12 MP sensor with a few bells and whistles to produce sharper autofocus and rapid image capture. It's pretty much the same as the one found on the Galaxy S7, but Samsung has been able to eke out a slightly better overall performance.

Shooting outdoors is clearer and more detailed than ever, with the reproduction of colour a real standout. Trying to photograph indoors was also good, but the brightness scale in the camera mode can prove a little finicky if turned too high up. Other than that, the Galaxy S8's camera is another in a long line of solid all-round performers from Samsung. 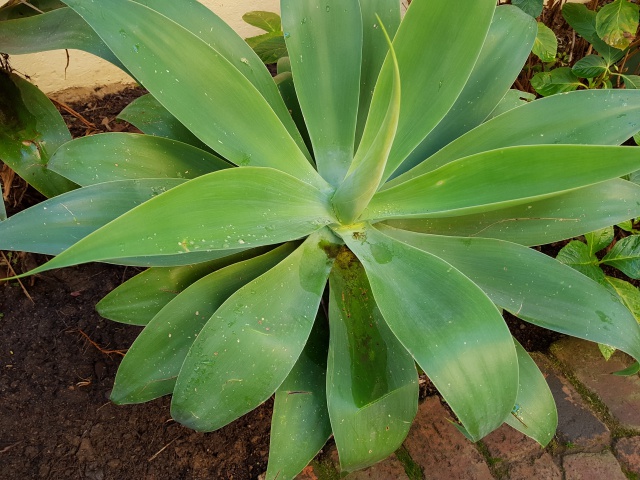 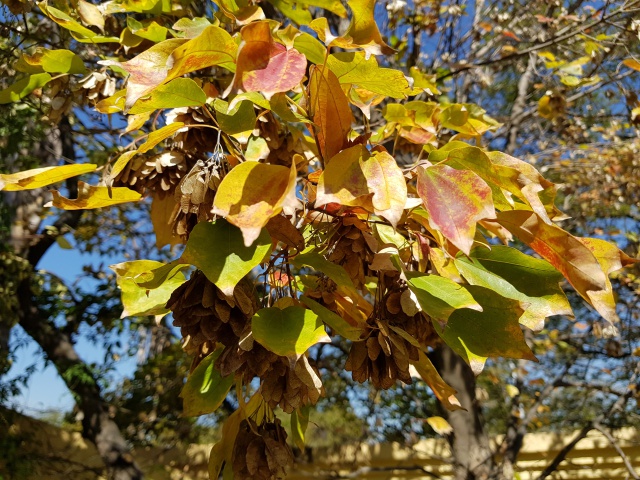 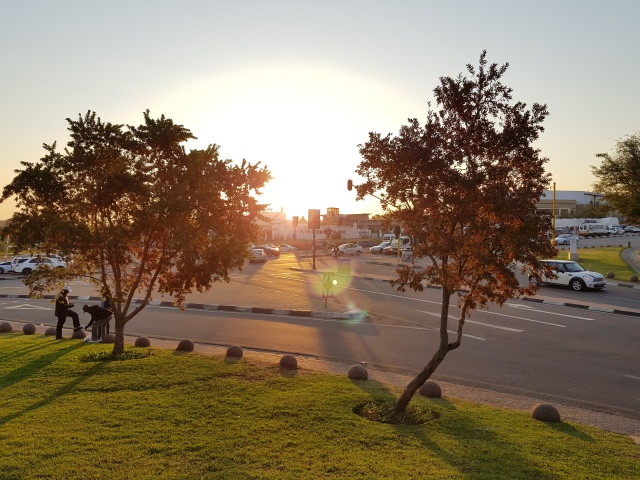 Along with the Infinity Display, Samsung also introduced its own digital assistant in form of Bixby, when debuting the Galaxy S8 and S8+ in New York. It requires a Samsung account in order to set up, which is not the worst thing, but does feel like an unnecessary hurdle in gaining access to Bixby's functionality.

In terms of what Bixby can do, think of it much like a mixture of Google Assistant and Google Now. The latter aspect is activated by pressing the button sitting below the volume rocker, which brings up an on-phone app with vital information for the user, such as calendar events, news and device statistics. Added to this, Bixby can be operated via voice commands, much like Google Assistant or Apple's Siri, with added contextual awareness too. It's not yet as polished as those two offerings, but given time may be with more data, so for now proper judgement on the digital assistant must be reserved.

It's easy to evangelise the Galaxy S8, but there are a couple of issues I have with it. The first is the fingerprint sensor, or rather where it has been placed. For whatever reason, Samsung has deemed it fit to put it on the left side of the main camera (with the screen facing you), which is not the best if you favour fingerprint over the S8's face detection software. Quite often, your finger will hit camera housing instead of the sensor, which is less than ideal and also smudges the lens.

The other issue is one that Samsung cannot be faulted for. Seeing as the phone is covered in glass and metal, which feels premium but also makes one think it could scuff easily, as well as it costing R15 499 (64 GB), you're going to want to buy a cover to protect it. While it's a practical solution to ensure your phone doesn't get damaged, any cover, no matter what it looks like, will detract from the great design work that has gone into the S8. As such, the true value of the Infinity Display becomes marred by a smartphone cover. It's a small issue to worry about, but is still one you'll have to be aware of. 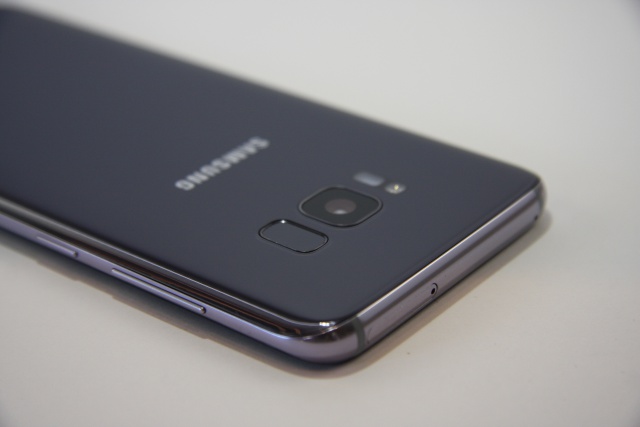 The Samsung Galaxy S8 is not cheap at R15 499. Nor was its predecessor, so this is the price you're going to have to pay for the best all-round flagship at the moment. If you look the S8 as an investment, then it features some of the best tech in every possible category.

Perhaps the only area it does not hold top honours for is camera performance, with that going to the Huawei P10 Plus in my books. That said, the rest of the S8's quality cannot be questioned. If you can manage the R15k price tag, you'll be carrying the best phone around at the moment. 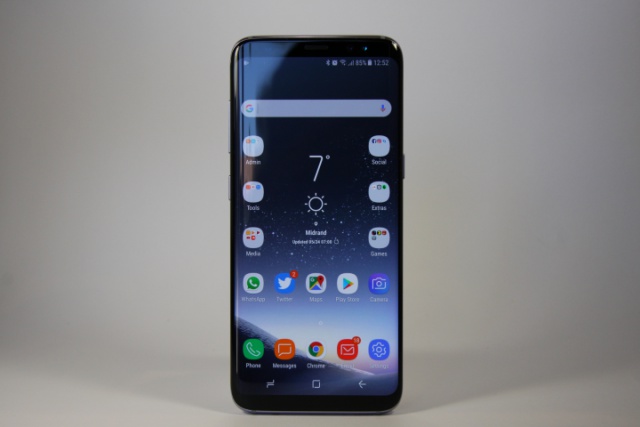 SAMSUNG GALAXY S8 WAS RECEIVED AS A SEEDING UNIT.