The latest research from data analytics company ABI Research has revealed that there are some tough times ahead for smartphone vendors, with the balance of power in the mobile industry still residing with Samsung/Android and Apple.

ABI Research added that Korean tech giant Samsung is dominating the sales channel. This is due to the company offering more than double the number devices than any other vendor across the 13 markets and multiple online retailers researched.

Nick Spencer, senior practice director at ABI Research said: “ABI Research’s Device Portal analysis showed that Samsung is dominating the sales channel at nearly every price point, with only Apple challenging Samsung at the high end of the [smartphone] market.

This degree of dominance leaves little room for rivals to compete, with ABI Research particularly highlighting the plight of other Android OEMs (original equipment manufacturers) as well as those using uncompetitive operating system (OS) ecosystems. 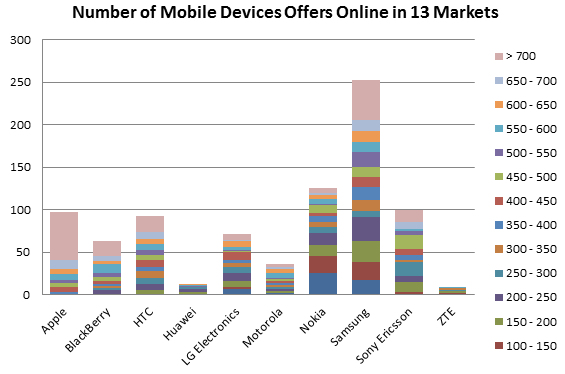 Course of the smartphone looks to be set in stone

The company asserted that various carriers around the globe have been making moves towards delivering a more balanced smartphone device vendor industry, including the use of smartphone subsidies.

However, these efforts have not yielded much fruit since the carriers are still obliged to fulfill consumer demand and at present that equates to Android-powered smartphone from Samsung as well as iPhones from Apple.

Spencer stated, “The balance of power looks set to remain with Apple and Samsung for the foreseeable future. The course of the smartphone market is looking increasingly set as it enters a more mature stage on the current innovation curve. This is bad news for the players vying for the third ecosystem position.”

In other market research related news, Cisco’s Visual Networking Index recently predicted that a staggering 133 million network connections will be the norm in South Africa by 2017.